Wisconsin state senator says he was attacked by protesters in Madison 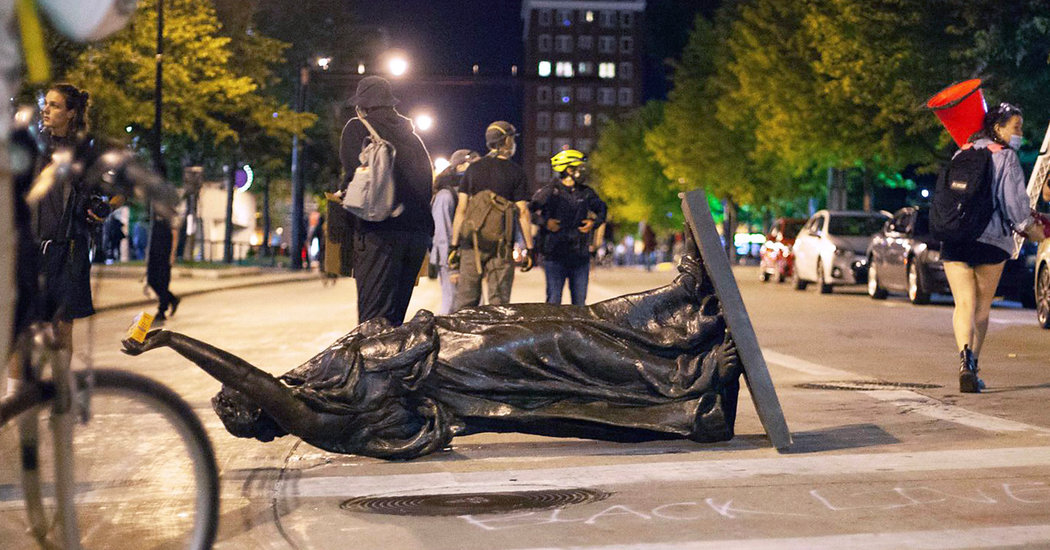 A Wisconsin state senator said he was assaulted by protesters in Madison Tuesday night, amid protests against racism and police violence in the city in which two statues were shot down.

Senator Tim Carpenter, a Democrat who represents areas in Milwaukee, said the incident took place after he took a video of protesters on a cell phone, who had been marching through downtown Madison for several hours.

Wisconsin Gov. Tony Evers condemned the violence Tuesday night and said Carpenter was “among the individuals attacked last night.” He said the protests “stood in stark contrast to the peaceful protests we have seen in our state in recent weeks,” adding that he was ready to activate the Wisconsin National Guard “to protect the state’s buildings and infrastructure.”

Protesters demolished on Tuesday the statues of an abolitionist, Hans Christian Heg, who died fighting for the Union in the Civil War, and a replica of the “Forward” figure of Madison, an allegorical work designed in the 1890s intended to embody the motto of the state. Demonstrations targeting those statues contrasted with similar protests in other cities and states where statues of Confederate and colonial figures have been removed by protesters or authorities.

Carpenter told The Milwaukee Journal-Sentinel that he had stopped to take a photo of the protests, and posted a video on Twitter showing a large group of protesters standing on the street near the Capitol screaming. Two protesters can be seen running towards Mr. Carpenter, and one picks up his phone. The camera deviates.

“Leave my phone alone,” you can hear him say. “Delete it!” says a woman. As news of the confrontation spread on social media, Carpenter tweeted that taking the pictures “assaulted and beat me” from eight to ten people. He said he may have had a concussion, that the vision in his left eye was blurred, and that he had pain in his neck and ribs.

“This has to stop before an innocent person is killed,” he tweeted early Wednesday. “I locked myself in the Capitol until I’m safe.”

A member of Mr. Carpenter’s office said his staff had no details on his condition Wednesday morning. “He is seeking medical attention right now, that’s all we know,” he said.

In a photo shared by a journalist on social media, a man identified as Mr. Carpenter, wearing a blue shirt, appears to be in a confrontation with protesters. In others, he can be seen kneeling and lying on the ground. A local news station, WKOW 27, reported that he collapsed in front of his news team and that they stayed with him until an ambulance arrived.

In a statement to The Washington Post, Mr. Carpenter said: “The sad thing is that I am on your side for peaceful protests: I am a gay progressive Democratic senator who turned 36 in the legislature.”

Tuesday’s protests were fueled in part by anger over the arrest of a black man, identified by police as Devonere Johnson, at a restaurant near the Capitol. The video of the arrest shared on social media showed officers fighting with the man on the sidewalk, including pulling him by the legs and carrying his body to force him into a police car. He runs briefly from the car, and they catch him again.

Police released a video showing the man speaking into a megaphone and holding a baseball bat at the restaurant. The department said in a statement that agents were trying to arrest him “for his actions inside the restaurant.”

Police later said 200 to 300 people marched through downtown Madison Tuesday night and through Wednesday, breaking windows in the city’s county building and trying to “force open” the Capitol.

Mr. Evers said that Capitol Police prevented protesters from entering the building and that the protesters had done “significant damage” to state property.

“Violence against anyone, whether it’s in the middle of the street in broad daylight, at home trying to sleep, go for a run or protest as was the case last night, is wrong,” the governor said in a statement. . “Any act of injustice against a person is less justice for all of us, and the people who committed these acts of violence will be held accountable.”