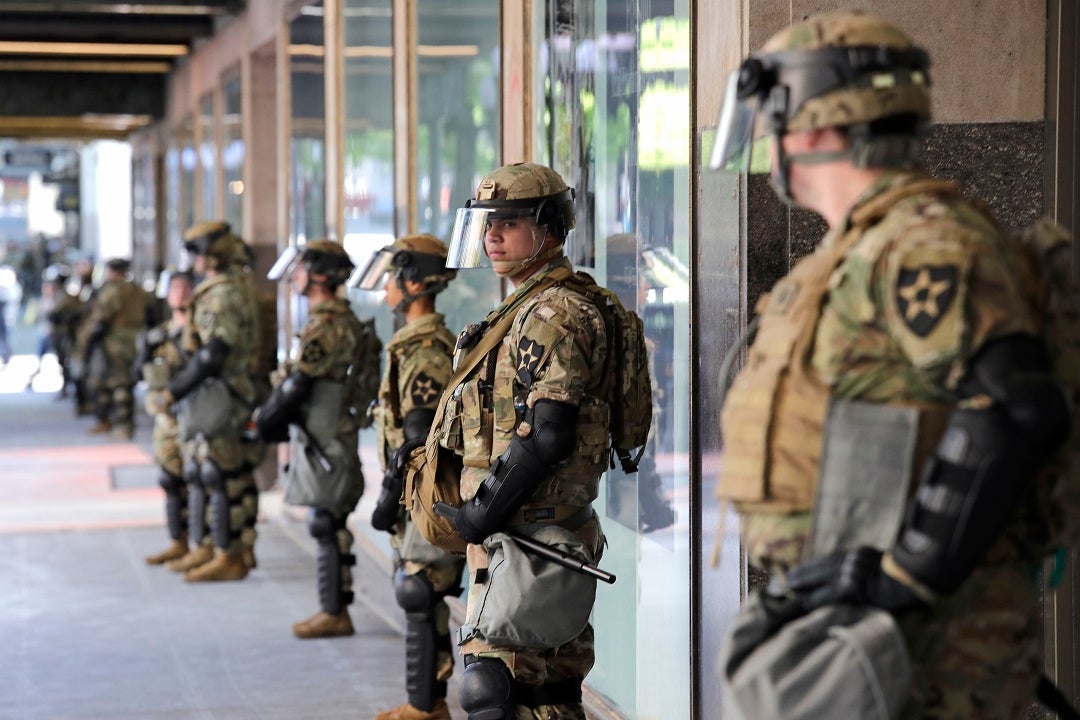 Wisconsin Gov. Tony Evers activated the National Guard on Wednesday after protesters downed two statues, destroyed buildings, and a state senator was attacked outside Capitol Hill during a night of violence that erupted after all-day protests.

The guards will protect state property and “ensure that people can exercise their First Amendment rights while ensuring the safety of members of public and state infrastructure and buildings,” said Governor Tony Evers.

The riots that developed Tuesday night began after 200 to 300 protesters marched through downtown Madison and escalated once they reached the state Capitol grounds. Some attempted to break into the Capitol building but were repelled by the police inside with pepper spray.

“The mob has become very bold,” said Madison Councilman Paul Skidmore. “They see that they can get away with it a little and move more and more. [Downtown Madison] it’s a battle zone right now, and I fear for my city. “

The Wisconsin “Forward” statue stands across the street from Capitol Square in Madison on Tuesday. The statue has since been recovered, authorities said. (Emily Hamer / Wisconsin State Journal via AP)

A spokesperson for the group released a list of lawsuits, including the firing of a Madison police officer involved in the 2015 shooting of Tony Robinson, a 19-year-old black man. The incident referenced in recent weeks amid nationwide protests against police brutality and racial injustice.

A protester was arrested after he allegedly went to a restaurant across the street from the Capitol with a baseball bat. The man, identified as Devenore Johnson, 28, spoke through a megaphone while walking through the establishment. He was arrested and was seen being taken by the police to a patrol car.

Others gathered near a condominium building and surrounded a crane, forcing the driver to abandon the vehicle. The crowd stormed buildings, and a Molotov cocktail was thrown into a city and county building. Windows at the Tommy Thompson Center, named for the former Republican governor, and lights on the Capitol were smashed.

Evers said there was “significant damage to state property.”

Democratic State Senator Tim Carpenter ran into protesters when he entered the Capitol building and began recording them. He said he was “assaulted and beaten” by eight to 10 people while taking the video.

“The behaviors we saw were incredibly dangerous, putting people’s lives at risk,” he said. “It is important that we separate First Amendment protests from those involved in criminal conduct.”

He added that anyone involved in criminal behavior “will be responsible.”

Protesters also turned their anger on two statues: one of the Civil War Colonel Hans Christian Heg, who fought for the Union side and was a fervent abolitionist, and one of Wisconsin’s slogans, “Go ahead.” The base of Heg’s figure was defaced with graffiti that read “Fire Matt Kenny,” the Madison police officer involved in the 2015 shooting.

He was accused by prosecutors of any wrongdoing.

Protesters dragged the statue half a mile away and threw it into a lake. Both figures were covered, Evers said Wednesday.

The anger unleashed on the statues follows similar acts against monuments of controversial historical figures following the death of George Floyd while in police custody.

“The fall of the statues is a huge gain for the movement, although I think the liberal and conservative media will try to portray last night as senseless violence rather than the strategic political movement that it really was,” wrote protester Micah Le, according to The Associated Press.

President Trump promised this week to protect public statues and federal monuments after a series of incidents of vandalism and nationwide clashes between police and protesters as he attempted to remove them from public spaces by force. He is expected to sign an executive order this week making the destruction of such properties punishable by imprisonment.

Republicans have asked Evers and Rhodes-Conway, both Democrats, to do more to protect the Capitol while criticizing them for failing to act quickly to calm Tuesday’s riots. US Republican Representative Tom Tiffany has asked Evers to resign.

In a statement, Rhodes-Conway called the protesters “extremely dangerous,” while Lieutenant Governor of Wisconsin Mandela Barnes, the first black person to hold that position, said “far-right provocateurs” had “fanned the flames. of hatred. “