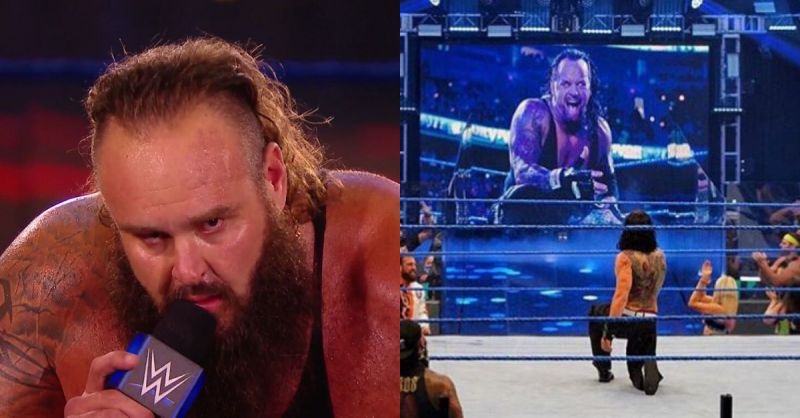 WWE SmackDown started with a video package celebrating The Undertaker’s life and career before seeing the SmackDown Superstars in the arena singing “Thank you, Taker.” We cut a snippet of Taker’s first appearance in WWE before heading to the commercials.

Back on SmackDown, we got a full recap of the Undertaker’s latest appearance with AJ Styles, Boneyard’s party, punctuated by short interviews from Roman Reigns, John Cena, Edge, Bet Hart, Kane, Ric Flair, and others about Deadman.

The OC was part of the match, but is no longer in WWE. This is probably their last appearance on WWE television.

We returned to the SmackDown ring where King Corbin was talking about how Vince gave Taker special treatment and had been retaining stars like him in the process. Corbin said that he it did not want thanks to Taker and said he sucked before Jeff Hardy came out and hit him from behind.

We got a brief interview from Kurt Angle and Stone Cold Steve Austin about their thoughts on Deadman.

Backstage, Hardy said he challenged Corbin to a game in tonight’s main event.

Alexa Bliss vs. Nikki Cross vs. Dana Brooke vs. Lacey Evans – Fatal 4-Way Match to decide the No. 1 contender for the SmackDown female title

Alexa and Nikki began to face Dana and Lacey, but when the two were thrown out of the ring, Cross turned to her teammate Alexa and tried to catch her.

Lacey and Brooke returned to the ring before Lacey was in control and Brooke came up for a saddle, but Nikki broke the next pin.

Alexa Bliss climbed to the top and went for Twisted Bliss, but Brooke pulled away at the last second and slammed her onto the mat.