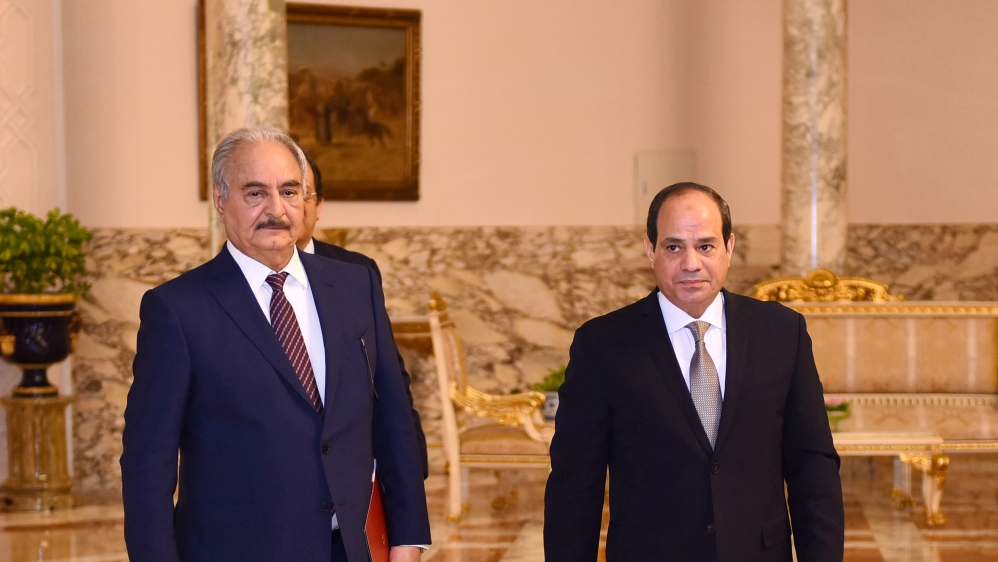 Libya’s internationally recognized government says the plans were discussed with the head of the United States African Command (AFRICOM) to jointly “fight terrorism” in the war-torn country during a meeting with Prime Minister Fayez al-Sarraj .

Libyan-American discussions were held as Arab League foreign ministers were due to hold an emergency meeting to try to find a diplomatic solution in Libya amid growing foreign intervention and increased fighting.

“In the framework of consultations on the evolution of the situation in Libya, Fayez al-Sarraj met on Monday with [American] General Stephen Townsend and the United States Ambassador to Libya, Richard Norland, “the Government of National Accord (GNA) said in a statement.

The two US officials arrived at Zuwara airport, about 120 km (100 miles) west of the capital Tripoli, for the meeting.

They held talks on “joint coordination between the GNA and AFRICOM for the fight against terrorism in the framework of the strategic cooperation between Tripoli and Washington,” said the GNA.

Libya has been shattered by violence that attracted tribal militias and foreign actors since the 2011 overthrow and assassination of dictator Muammar Gaddafi in a Western-backed uprising.

The oil-rich country is divided between rival administrations in the east and west, and the conflict recently attracted increasing foreign participation.

“In the context of intensifying foreign intervention in Libya, the meeting focused on current opportunities for a strategic pause in the military operations of all parties to the conflict,” the US embassy in Tripoli said in a statement.

“Ambassador Norland described the United States’ support for ongoing diplomacy through UN auspices to promote a ceasefire and political dialogue.”

Tensions are mounting in Libya with the GNA enjoying Turkish military support in its conflict against renegade commander Khalifa Haftar and his Libyan National Army (LNA).

Norland said that “external actors should stop fueling the conflict [and] respect the UN arms embargo “in order to preserve Libya’s sovereignty and promote political stability.

The talks between the United States and GNA came days after AFRICOM said it had evidence that Russian military aircraft active in Libyan airspace used air bases in Jufra and the key city of Sirte east of the capital.

Analysts also suspect that France supports Haftar along with Egypt, Russia and the United Arab Emirates, but Paris insists that it is neutral in the conflict.

Turkey’s intervention on behalf of the GNA has changed course against the LNA and its 14-month campaign to capture Tripoli, with Haftar’s forces retreating to the east.

In a sign of convergence between France and Egypt, French President Emmanuel Macron said Monday that he could understand the “legitimate concern” of Egyptian President Abdel Fattah el-Sisi, who warned that the advances of the GNA forces backed by Turkey could promote a military intervention Cairo.

“I don’t want in six months, or a year or two, to see that Libya is in the situation Syria is in today,” said Macron, who previously accused NATO member Turkey of playing a “dangerous game “in Libya. .

Meanwhile, Turkey responded to French criticism of its intervention in Libya, saying that Macron must have suffered a “mental eclipse” to oppose Ankara’s support for the internationally recognized government in Tripoli.

“The current problems in Libya are caused by attacks by the coup leader Haftar, whom (Macron) supports and who is a warlord who rejected the ceasefire agreements in Moscow and Berlin,” he said, referring to the international efforts to end fighting in January.

It remains to be seen whether Tuesday’s Arab League meeting can produce significant results on the ground in Libya.

Mahmoud Abdelwahed of Al Jazeera, reporting from Tripoli, said the GNA Foreign Ministry rejected the Egyptian call for dialogue and highlighted the military and diplomatic support that Cairo has provided to Haftar in the past five years.

“The Tripoli government says it cannot rely on any offer by the Egyptian regime, especially after the threat made by the Egyptian president, which the GNA considers a violation of its sovereignty and a severe intervention in Libya’s internal affairs,” he said. Abdelwahed.

“The government says that any conclusion of this meeting will be null because [Egypt] could not be queried in session. “