Starbucks barista refuses to serve a woman who doesn’t wear a mask, gets GoFundMe 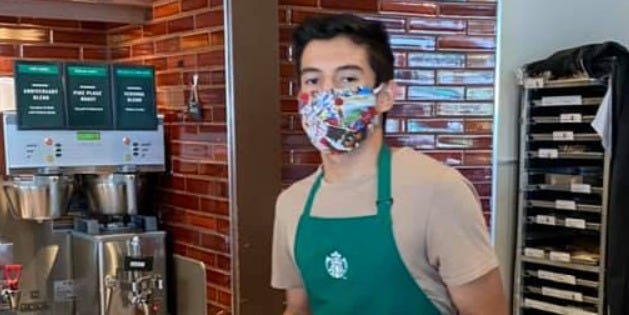 More than 2,000 people have disbursed more than $ 22,000 for a Starbucks employee who on Monday refused to serve a woman who was not wearing a face mask at the San Diego store where she works.

The client, identified as Amber Lynn Giles, took a photograph of Lenin Gutiérrez and shared it on Facebook, along with a complaint about him. “Next time I will wait for the police and file a medical exemption,” he wrote.

The post has been shared about 47,000 times and has garnered more than 133,000 comments as of Thursday, and Giles had been dubbed San Diego Karen.

Despite the accumulated criticism of her, Giles doubled over and said, “The masks are stupid and so are the people who wear them.”

On May 1, San Diego County ordered the use of face masks in public places because the coronavirus spreads through the cough drops, speech, or sneezes of an infected person, and research shows that the masks They help reduce the rate of spread of the disease.

“The covers help prevent the spread of COVID-19 and are part of our path to reopen San Diego,” the officials wrote in an online notice.

As of Thursday, 196,046 people in California tested positive for COVID-19 and 5,726 died, according to data compiled by Johns Hopkins University. The state outbreak is now second only to that of New York.

Cloth masks, homemade face liners, scarves, scarves, or neck gaiters are required when people in San Diego County wait in line to enter a store, inside a business, use public transportation , pick up take-away orders, receive medical assistance, or work any type of essential job.

Matt Cowan started a GoFundMe campaign to denounce Gutiérrez for “standing up against a Karen in the wild.” It has already raised more than $ 22,000.

Cowan told KGTV, a local ABC affiliate, that donors are “meeting someone for doing what they’re supposed to do and trying to protect everyone else. It just shows that there are a lot of good people out there and that outweighs the bad. ” “

Meanwhile, Gutiérrez posted a video on Facebook on Tuesday in which he said it was “shocking” to see that an encounter that lasted only a few minutes “got so big.”

He described working at the cash register on June 22 and asking Giles if he had a face mask. She said no, but before he could show her a piece of paper describing the guidelines Starbucks was following, “she turned me around and said, ‘No, I don’t need one,’ and she started cursing a storm,” he said.

Giles ran out of the store, only to return and ask for Gutiérrez’s name and take a photo of him. She also threatened to call “corporate,” he said, before leaving and not returning.

A positive side of the meeting has been the unexpected but “surprising” outpouring of support that, according to Gutiérrez, will help him pursue his dream of becoming a dancer and sharing the art form with others.

“With this donation … I can make these dreams come true. Now I can feed my passions even better, so from the bottom of my heart, thank you very much,” he said.