Research on land plants shows that nanoplastics accumulate in tissues. 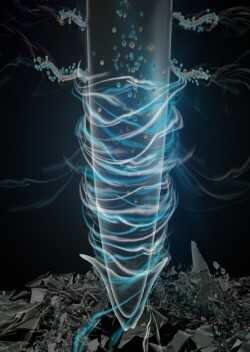 As concern among environmentalists and consumers about micro and nanoplastics in oceans and shellfish grows, they are increasingly being studied in marine environments, say Baoshan Xing of the University of Massachusetts Amherst and colleagues in China. But “little is known about the behavior of nanoplastics in terrestrial environments, especially in agricultural soils,” they add.

Xing, an environmental scientist at UMass Amherst Stockbridge School of Agriculture and collaborators from Shandong University, China, point out that until now, there was no direct evidence that nanoplastics are internalized by land plants.

They claim: “Our findings provide direct evidence that nanoplastics can accumulate in plants, depending on their surface charge. Accumulation of nanoplastics in plants can have direct ecological effects and implications for agricultural sustainability and food security.” Both positively and negatively charged nanoplastics accumulate in the commonly used laboratory model plant, Arabidopsis thaliana.

Xing adds that widespread use and persistence in the environment result in an “enormous” amount of plastic waste. He says: “Our experiments have given us evidence of the uptake and accumulation of nanoplastics in plants in the laboratory at the tissue and molecular level using microscopic, molecular, and genetic approaches. We have demonstrated this from root to shoot.” Details are in Nanotechnology nature this week.

Xing notes that nanoplastic particles can be as small as a protein or a virus. Weathering and degradation change the physical and chemical properties of plastic and impart surface charges, making environmental particles different from the pristine polystyrene nanoplastics that are often used in the laboratory. “That is why we synthesize polystyrene nanoplastics with positive or negative surface charges to use in our experiments.”

He helped design the study, interpret the results, evaluate and revise the manuscript while a large team at Shandong University led by Xian-Zheng Yuan and Shu-Guang Wang conducted the experiments.

Arabidopsis plants were grown in soil mixed with differently charged, fluorescently labeled nanoplastics to assess plant weight, height, chlorophyll content, and root growth. After seven weeks, they observed that biomass and plant height were lower in plants exposed to nanoplastics than in controls, for example.

“Nanoplastics reduced the total biomass of model plants,” adds Xing. “They were smaller and the roots were much shorter. If the biomass is reduced, it is not good for the plant, the yield is low and the nutritional value of the crops can be compromised.”

He adds, “We found that positively charged particles were not absorbed as much, but are more damaging to the plant. We don’t know exactly why, but positively charged nanoplastics are likely to interact more with water, nutrients, and roots, and it triggered different sets of gene expressions. That needs to be further explored in crop plants in the environment. Until then, we don’t know how it can affect crop performance and food crop safety. “

The team also analyzed seedlings to investigate the sensitivity of the roots to charged nanoplastics. Exposed for 10 days, growth of seedlings was inhibited compared to that of control seedlings. To identify the responsible molecular mechanisms, the researchers used transcriptomic RNA-Seq analyzes of roots and shoots, then verified the results with a quantitative PCR assay on three root genes and four shoot genes.

“Regardless of surface charge, Arabidopsis can absorb and transport nanoplastics with sizes less than 200nm,” they write. Furthermore, “in this study, we mainly demonstrate that the pathway for absorption and transport of nanoplastics in root tissues differs between differentially charged nanoplastics.”

Provided by the University of Massachusetts Amherst