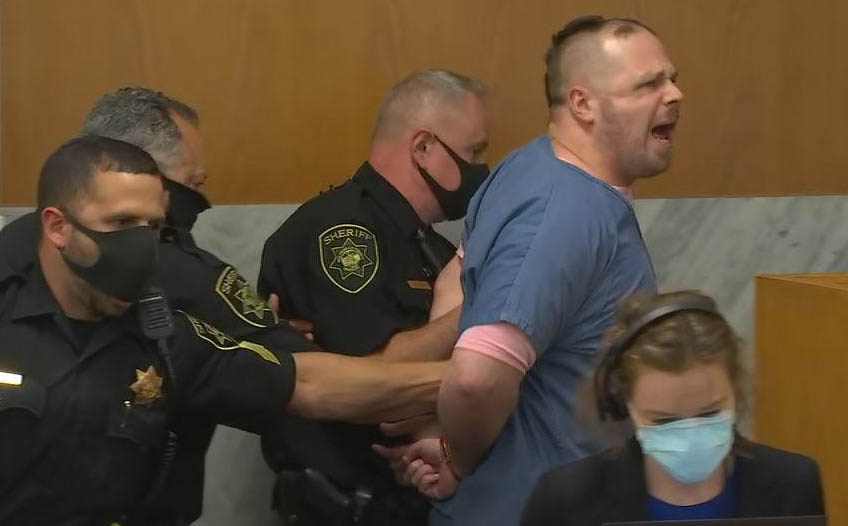 PORTLAND, ORE. (AP) – Jeremy Christian, convicted of a double murder on a Portland light rail, was sentenced to life in prison on Wednesday without the possibility of parole.

Multnomah County Circuit Judge Cheryl Albrecht’s sentence came a day after Christian stood up in court and told a survivor that he regretted not killing her.

Christian, 38, was convicted in February of 12 counts, including the stabbing murders of train passengers Ricky John Best, 53, and Taliesin Myrddin Namkai-Meche, 23, on May 26, 2017. A third stabbed victim survived.

His victims had attempted to intervene when he began shouting racist and anti-Muslim insults while sitting near two black teenagers, one of whom was wearing a hijab.

The minimum sentence would have allowed the possibility of parole after 30 years. The death penalty is legal in Oregon, but Governor John Kitzhaber imposed a moratorium in 2011 and his successor, Kate Brown, continued it.

By removing the possibility of parole, the judge cited Christian’s lack of remorse.

Before sentencing, Christian declared to the court that he did not accept any blame for the murders. “I am sorry that two people died, but I do not regret my actions that led to their death,” he said.

Christian’s outburst came Tuesday during a statement from Demetria Hester, who suffered a serious eye injury when she hit her with a bottle the day before her deadly rampage.

Hester, a black woman, described him as a white supremacist and a plague on society, then said, “When you die and go to hell, I hope you rot.”

Christian replied, “See you there.” Then he jumped up, took off his mask and yelled, “I should have killed you!” – adding a misogynistic insult.

Albrecht ordered Christian to leave the room after his outburst. She stated that he would not be in the courtroom to obtain further testimony, but advocates for two of the victims’ families said those relatives wanted Christian to hear what they said. The judge decided that it could be put in a space on Wednesday where he could hear and see the speakers, and they could see it, but he could not interrupt the process.

Christian had also yelled during his 2017 arraignment. In front of a courtroom that included Micah Fletcher, the surviving victim of the stabbing, he yelled, “Freedom of speech or die, Portland! You don’t have a safe place. This is America Come out if you don’t like freedom of expression.

He continued: “Death to America’s enemies! Death to Antifa! You call it terrorism, I call it patriotism. To die!”

Copyright 2020 The Associated Press. All rights reserved. This material cannot be published, transmitted, rewritten or redistributed.