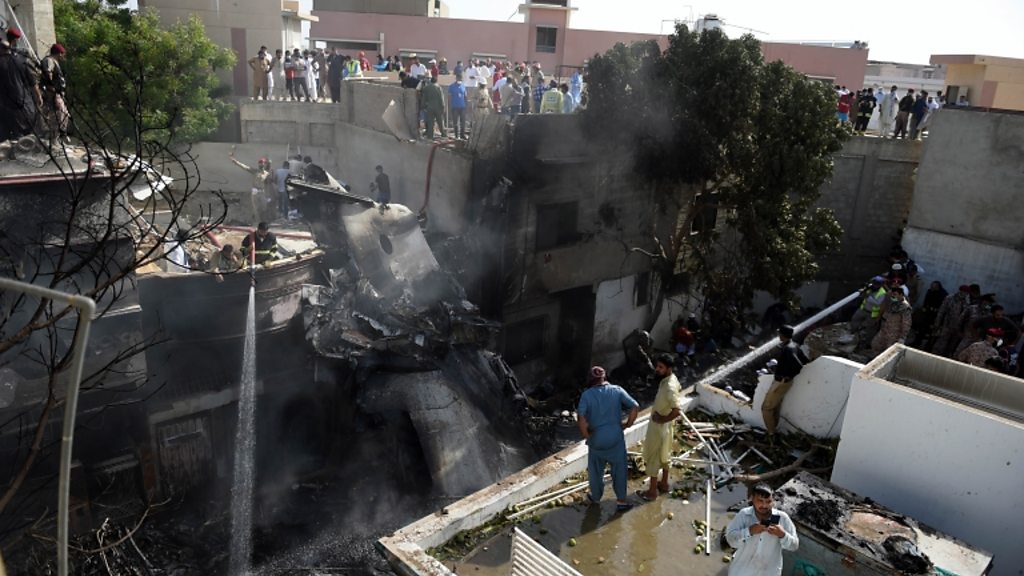 A plane crash that killed 97 people in Pakistan last month was the result of human error by the pilot and air traffic control, according to an initial report on the disaster.

They were unable to follow protocol, aviation minister Ghulam Sarwar Khan said in announcing the findings in parliament.

He also said the pilots were distracted due to the coronavirus pandemic.

The passenger plane fell on houses in Karachi on May 22.

Khan said there was nothing wrong with the plane, an Airbus A320, operated by Pakistan International Airlines (PIA).

“The pilot ignored the instructions of the air traffic controllers [ATC] and ATC, on the other hand, did not inform the pilot of the engine crash, “added Mr. Khan.

The passenger plane was en route from Lahore when it crashed into a residential area in Karachi, after attempting to land at the city’s Jinnah International Airport.

Khan said the pilot was initially unable to deploy the landing gear properly, prompting the plane to scrape the runway before taking off again.

Then, when he was about to make a second landing, air traffic controllers did not inform the pilot that the engines had been badly damaged, the minister reported.

Than happened on board?

The alleged audio of the conversation between air traffic control and a pilot for the second attempt was released shortly after the accident by the Pakistani media, in which the pilot is heard saying that the plane has “lost engines.”

An air traffic controller asks if he is going to make a “belly landing”, to which the pilot responds “Mayday, Mayday, Mayday”, the final communication from the plane.

Muhammad Zubair, one of the two surviving passengers, said there was 10-15 minutes between the first landing attempt and the accident. “No one knew that the plane was about to crash; they were flying the plane without problems,” he said.

He remembered how he passed out during the sudden descent, then woke up smoking and screaming.

PIA said the plane joined the fleet in 2014 and passed its annual airworthiness inspection last November.

In 2010, a plane operated by private airline Airblue crashed near Islamabad, killing all 152 people on board, the deadliest air disaster in Pakistan’s history.

In 2012, a Boeing 737-200 operated by Pakistan’s Bhoja Air crashed in bad weather as it approached land at Rawalpindi, killing all 121 passengers and six crew.

And in 2016, a Pakistan International Airlines plane burst into flames as it traveled from northern Pakistan to Islamabad, killing 47 people.