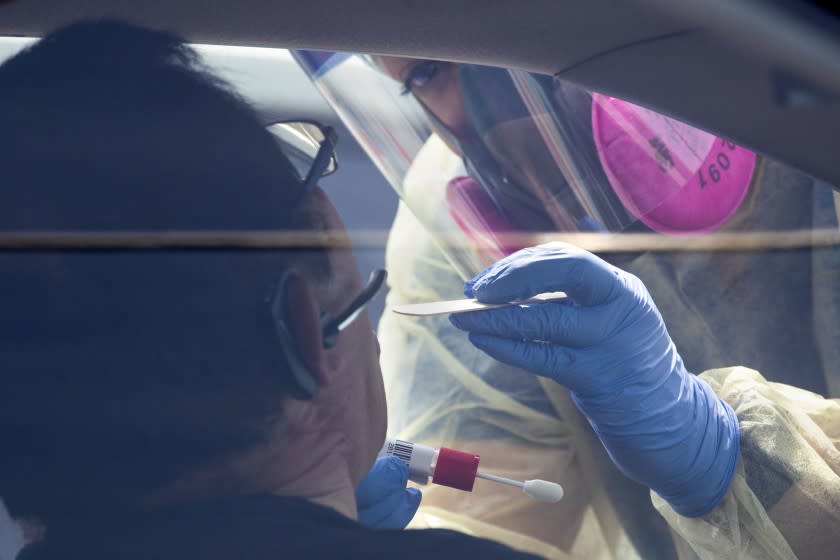 California broke a daily record for new coronavirus cases with more than 6,000 infections reported Monday, the highest single-day count in the state since the pandemic hit the US. USA

In Los Angeles County, authorities on Tuesday reported more than 2,000 new cases for the fourth time in the past week, bringing the total number of infections to more than 88,200. Authorities also reported 34 additional deaths, increasing the number of deaths to 3,171, most of the state’s total.

In San Diego County, officials reported more than 300 new cases for the second consecutive day after breaking a record with more than 310 cases on Sunday.

The case count is just a metric in tracking the spread of the virus, and while increased testing capacity may explain part of the increase, authorities have said the increase cannot be linked to testing alone.

Authorities have repeatedly warned that they expect transmission rates to rise as more companies reopen and people resume normal activities after orders to stay home for months.

Los Angeles County Public Health Director Barbara Ferrer said that while it is impossible to trace the origin of the spread in a public setting, it is “highly likely” that the overall increase is related to mass protests that erupted over the death George Floyd’s also as social gathering groups at restaurants and private parties.

In Riverside County, which has the second highest number of cases in the state, public health officials have reported 4,001 new cases in 14 days. Although the metric does not meet Governor Gavin Newsom’s standard for reopening, the county voted last month to approve a “Readiness and Reopening Framework” that outlines alternative benchmarks for reopening.

Authorities announced Monday that they will randomly select about 3,500 Riverside County residents for an antibody study to determine if they have been exposed to the virus. The study will assist the county’s planning efforts for the reopening.

“We are asking those contacted to seriously consider participating in the study,” said Kim Saruwatari, the county’s director of public health. “It is important to know the extent of the spread of the virus [and how many] antibodies have been developed. That information is vital as we go.

Statewide, the positivity rate among those examined for coronaviruses increased from 4.5% to 4.8% in the past week, and the number of hospitalizations increased by 16%.

In Los Angeles County, the daily positivity rate averaged over seven days increased to 8.8%. Authorities reported Tuesday that 1,515 people are hospitalized, 27% in intensive care. While that number is a long way from the highs of 1,900 patients in recent months, it is higher than the daily hospitalization counts of 1,350 to 1,450 in recent weeks.

In San Francisco, the director of Mayor London Breed and Health, Dr. Grant Colfax, announced this week that the city would move into its next phase of reopening from mid-July to June 29. Hairdressers, beauty salons, hairdressers, museums, zoos, tattoo parlors, massage establishments and open-air bars may reopen, provided they follow safety protocols.

Newsom said state health officials are closely watching the numbers, adding that he was confident the state could respond to the virus in the coming weeks and months.

“We have always entered this with our eyes wide open. We have always prepared for a sudden increase, “said the governor. “We are in that band, where I feel we anticipate the probability, as we have reopened, that the number is increasing, and they have.”

However, he said the state may reverse the course if case counts continue to rise.

“We are prepared to do that, if necessary,” he said.

Newsom repeated a request for people to cover their faces, which is now a state mandate, and to denounce companies and restaurants that do not follow security protocols.

“When you go to a restaurant and it is clear that they are not practicing what we are preaching, report them. Give us the tools to enforce, “he said.

In Los Angeles County, Director of Health Services Dr. Christina Ghaly said Monday that while the county currently has enough hospital beds available, the number of intensive care units may be limited in the coming years. weeks if COVID-19 patients have to compete for space with other patients Officials are closely monitoring those numbers.

Additionally, officials estimate that about 1 in 400 Angelenos may be ill without knowing it, as so-called asymptomatic spread remains a risk.

“Angelenos over the course of a typical day will likely interact with people who are infectious,” said Ghaly. “These people may not seem sick.”