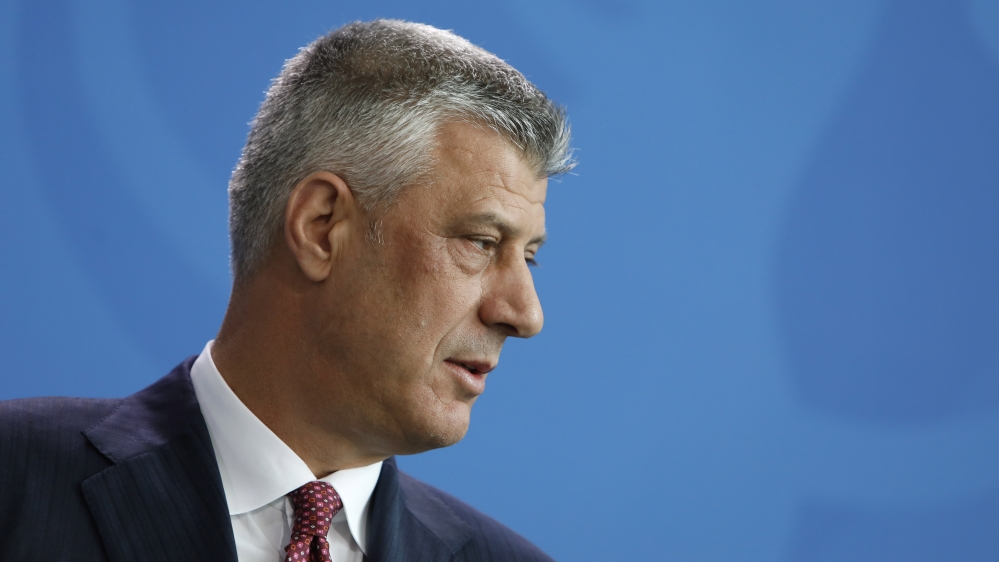 Kosovo President Hashim Thaci and nine others have been indicted by a court investigating war crimes committed during and after Kosovo’s war of independence with Serbia.

A statement issued Wednesday by the Office of the Special Prosecutor (SPO) in The Hague, the Netherlands, said Thaci and the other suspects were “criminally responsible for almost 100 murders” of Kosovar Albanians, Serbs and Roma.

Other charges include enforced disappearance, persecution, and torture.

The indictment is “the result of a lengthy investigation and reflects the SPO’s determination that it can prove all charges beyond a reasonable doubt,” the office said in a statement.

Thaci commanded fighters in the Kosovo Liberation Army (ELK) during the 1998-1999 war.

Thaci was preparing for a summit at the White House on Saturday with his Serbian counterpart Aleksandar Vucic, and local media reports suggested he had already left for the United States.

But the United States’ special envoy to Serbia and Kosovo, Richard Grenell, who organized the White House meeting, said in a tweet that Thaci had canceled going to the summit after the charges in The Hague.

“I respect your decision not to attend the discussions until the legal problems of those allegations are resolved,” Grenell said, adding that talks will now continue with Kosovo’s new prime minister, Avdullah Hoti, who has moved to ease friction. with Serbia.

The President of Kosovo has just informed us that he canceled his trip to Washington, DC after the announcement made by the Special Prosecutor’s Office.
I respect your decision not to attend discussions until the legal problems of those allegations are resolved.

‘A surprise for many in Kosovo’

Reporting from Pristina, Avni Ahmetaj of Al Jazeera said Thaci has faced many times in the past regarding war crime allegations, but has always denied wrongdoing.

“The news came as a surprise to many in Kosovo.” Ahmetaj said. “[KLA veterans] they say that the KLA did not commit any crimes, that they were defending their families during the war and that the only army that committed war crimes during the war in 1999 was the Serbian army. “

The indictment issued Wednesday was the first by the special court based in The Hague. The court has been operating since 2015 and has questioned hundreds of witnesses.

According to the statement, the accusation is being reviewed by a preventive judge who will decide whether to confirm the charges.

The prosecutor accused Thaci and Veseli of repeated efforts “to obstruct and undermine the work” of the court.

“Thaci and Veseli are believed to have carried out a secret campaign to revoke the law creating the Court and otherwise obstruct the Court’s work in an attempt to ensure that they do not face justice,” the statement said.

“By taking these steps, Mr. Thaci and Mr. Veseli have put their personal interests above the victims of their crimes, the rule of law and all the people of Kosovo,” he added.

Bekim Blakaj of the Center for Humanitarian Law in Pristina told Al Jazeera that the preventive judge has six months to confirm or reject the charges, adding that the announcement is unusual since “so far we have not seen such practice that the SPO issues such a statement before the charge is confirmed. “

Serbia does not recognize Kosovo’s 2008 declaration of independence. Serbia and Kosovo have been involved in negotiations negotiated by the European Union since 2011 to normalize relations as a condition of being a member of the bloc.