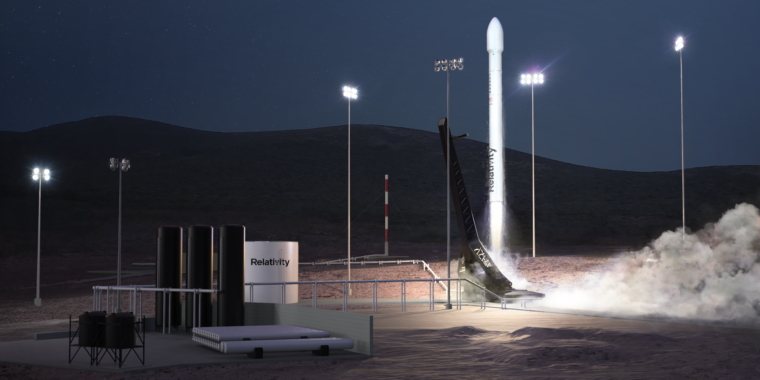 Relativity Space says it has reached an agreement with Iridium to launch six of the company’s next-generation communication satellites.

Each of the Iridium NEXT satellites, weighing 850 kg, will launch individually on Relativity’s Terran 1 rocket. This means that the new Launch Services Agreement will lead to up to six Terran 1 missions, beginning no earlier than 2023.

This is the fifth launch service agreement for Relativity, said Tim Ellis, co-founder of the California-based company. “This deal represents another blue chip company to subscribe to Relativity,” said Ellis. It shows that the Terran 1, with a potential lift capacity of 1.25 tonnes at low Earth orbit, meets a “unique” need in the launch market, he said.

Relativity Space is currently developing a launch site for its Terran 1 rocket at Cape Canaveral Air Force Station in Florida. The company has a multi-year contract to build and operate its own rocket launch facilities at Launch Complex 16. However, it will need a second launch site to accommodate Iridium satellites.

This is because Iridium has a constellation of 66 satellites in an almost polar orbit, distributed in six different planes at an altitude of 780 km. To reach this orbit, the Terran 1 rocket would need to launch towards a pole, so the company reached an agreement to build a second launch site at Vandenberg Air Force Base in California, Ellis said. The company will do so at a site south of Space Launch Complex-6.

The satellite company already has nine backup satellites in orbit, Iridium chief operating officer Suzi McBride said. However, Iridium has six additional spares in the field that it would like to launch on demand, to specific orbital planes. The new agreement covers a period from 2023 to 2030.

Iridium built these satellites primarily as insurance against a launch failure during the campaign to launch its first 75 Iridium NEXT satellites into orbit. All of them were safely placed in orbits by seven Falcon 9 rocket launches from 2017 to 2019. “Fortunately, SpaceX did a great job for us,” said McBride.

In launching the parts, Iridium evaluated the market and determined that several capable vehicles, such as the Falcon 9, were too large for individual satellites. And the smallsat rockets flying today, like Rocket Lab’s Electron rocket, were too small. “Relativity is really at our sweet spot,” he said.

Although Relativity has a lot of work to do to complete development and launch the Terran 1 rocket (the company’s goal is to do a test flight by the end of next year), McBride said Iridium has the luxury of not having to put it into orbit. your backup satellites right away. . He also expressed his confidence in the company’s team and the progress made to date.

A recent Relativity hiring, Zach Dunn, helped establish the SpaceX launch site in Vandenberg about a decade ago. And Dunn served as SpaceX’s senior vice president of launch for the entire Iridium campaign. Now he is leading the development of a new rocket factory in Long Beach.