Dalian virus outbreak spreads to Beijing, as locals complain about mismanagement of evidence by authorities 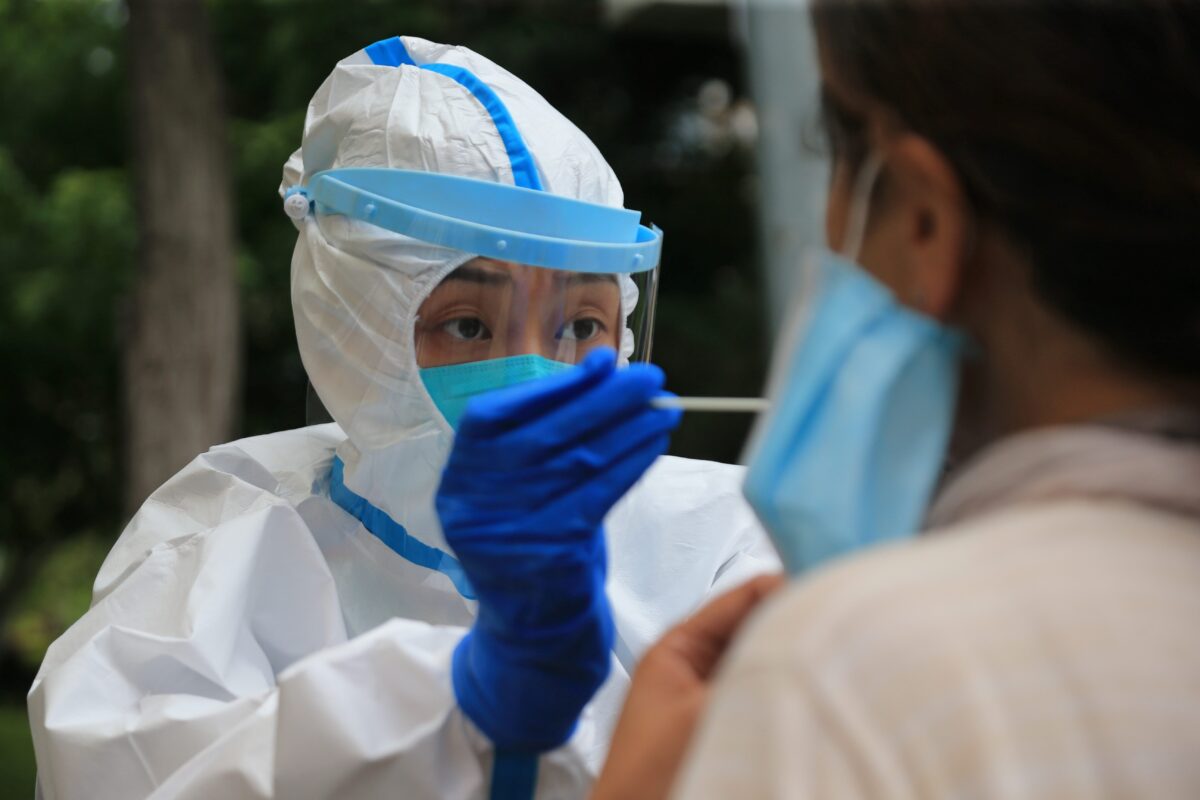 The latest outbreak of the CCP virus in Dalian has spread further to Beijing, according to official announcements on July 28.

Dalian, a city of some 6.9 million in northeast China, released a series of strict rules to prevent the spread of the virus. But the locals were unhappy with the authorities’ casual implementation and fought with and among medical personnel.

Meanwhile, on Sunday, the Dalian Municipal Health Commission announced that it had arranged 520 additional hospital beds to treat patients with COVID-19 and was preparing for an additional 860 additional beds.

And in the western Xinjiang region, the latest outbreak continued to worsen.

An official with the Xinjiang Regional Center for Disease Control and Prevention (CDC) told The Epoch Times by telephone that most newly diagnosed patients had not visited the area identified by authorities as ground zero: the Erdaoqiao neighborhood in Urumqi.

They contracted the virus from other places and were diagnosed by general nucleic acid tests, the official said.

Although he did not provide further details, his admission of infections outside ground zero suggested a larger community outbreak.

Residents of different cities in Xinjiang said in phone calls that local authorities blocked Ghulja, Kashgar and Changji, although there were no official announcements. In addition, their residential complexes, which had not publicly reported any diagnosed cases or symptomatic carriers, were closed, with no resident being able to leave their home.

The Dalian Municipal Health Commission announced more patients diagnosed with COVID-19 on July 28, including a patient who had not contacted any previously diagnosed patients or asymptomatic carriers, suggesting that there is already a community spread in the latest outbreak of Dalian.

Meanwhile, the CDC in Beijing announced a Dalian-related COVID-19 patient, a 53-year-old woman, who was diagnosed on Tuesday.

Beijing CDC Deputy Director Pang Xinghuo announced at a press conference on Tuesday that the patient arrived in Beijing from Anhui province on July 14. On July 16, she took a train from Beijing to Jinzhou City in Liaoning Province to visit her friends. On July 18, she and her husband had dinner with a friend of Dalian, who was later identified as an asymptomatic carrier of the CCP virus.

On July 19, the patient returned to Beijing by train and was diagnosed on July 27, according to Pang.

By Tuesday, authorities confirmed that the virus had spread from Dalian to nine other cities in four provinces and one directly governed municipality.

The outbreak of the new wave in Dalian was first announced on July 23.

Three days later, the Chinese National Health Commission, Ma Xiaowei, ordered the COVID-19 test on each Dalian resident over the next four days.

Dalian residents shared their experiences with The Epoch Times in Chinese, explaining that the tests created chaos.

Ms. Liu lives in the Xinchang residential complex in the Xinzhaizi neighborhood. Her owner informed her that all residents should be tested on July 27.

That morning, Liu went to the testing site at Xinzhaizi Elementary School after 6 a.m. She thought she could get tested earlier if she got there earlier.

“We just saw countless people waiting outside the school gate. Some arrived at 3 in the morning, ”said Liu. She realized that many other residents had the same idea as her.

When the test site opened at 8 am, the people in line pushed and shoved. “It is a disaster everywhere,” added Liu. “We had no idea where to go … very crowded.”

Liu witnessed residents fighting each other due to the crowding. Some argued with medical personnel, while police officers at the scene began to yell in an attempt to restore order.

At 10 in the morning, Liu’s daughter, who had accompanied her to the exam site, became impatient. Liu decided to go to a local hospital to get tested for herself and her family members, which cost 106 yuan ($ 15).

Testing at public test sites is free, but authorities will not return test results to residents. If someone wants to receive their test result, they should retest at a local hospital.

But according to the new city rules, residents must show a negative nucleic acid test result to take the subway or leave the city.

The Epoch Times also obtained an official’s handwritten investigation record of the alleged zero patient, Mr. Shi, in Dalian, revealing that a local hospital did not immediately examine Shi for COVID-19.

According to the record, on July 14, Shi visited a local hospital, but her condition was treated like a normal cold. Shi also took the medicine, the Lianhua Qingwen Capsule, a Chinese herbal medicine previously promoted by the leading Chinese regime specialist as an effective drug to prevent, mitigate, and treat COVID-19. But the medicine had no effect, and Shi’s health continued to deteriorate.

On July 21, Shi visited another hospital and was finally diagnosed with COVID-19 on July 22.

Since May, Zhong Nanshan, one of China’s leading epidemiology experts, has promoted the Lianhua Qingwen Capsule as an effective COVID-19 treatment in state media, as well as a government conference.

But on June 26, the US Food and Drug Administration issued a warning letter stating that Lianhua Qingwen was an unapproved and mislabeled product, and that it would not be allowed to be sold in the United States. .

Lianhua Qingwen is manufactured by Shijiazhuang Yiling Pharmaceutical, a company founded and chaired by Wu Yiling. Wu and Zhong co-founded a medical research center in Guangzhou City in July 2019, which studies Chinese medicine that can help treat diseases related to the lungs.