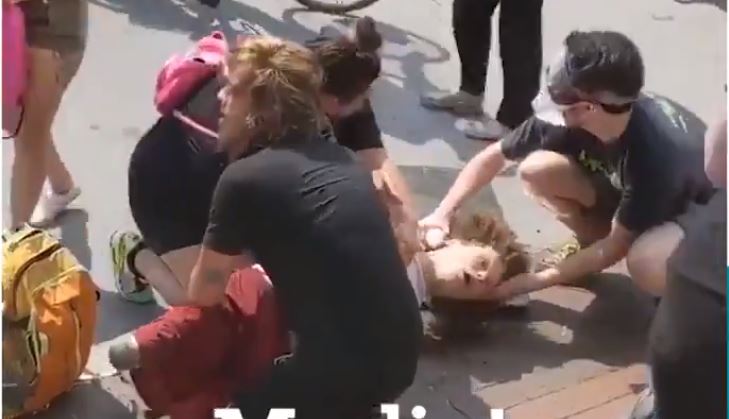 The Columbus, Ohio video on Sunday shows dozens of police officers dispersing a crowd with pepper spray, including a man with a double amputation.

Columbus protesters can be seen screaming for medical help in several videos posted on Reddit and other social media, and a double amputee was left without his prosthetics in the aftermath. Local television news media and amateur cameramen portray the initial confrontation between officers and protesters from the Columbus Police Department, as officers formed a phalanx-like position and used their bikes to push protesters back.

The double amputee can be seen howling in pain on the ground as other protesters demand their legs back from the officers and repeatedly yell, “Medic!”

Update: The Columbus Police Department responded Monday night to the incident, saying the protester with leg prostheses had earlier released officers with large plywood signs. Sergeant James Fuqua defended his officers’ response to The Columbus Dispatch: “It exploded in this with little or no context. We are being publicly annihilated because they really think what they saw really happened.”

Fuqua told the Firm that officers at the scene were unaware that the man had prosthetic legs due to his ability to launch projectiles at the police, which he said preceded the previously recorded incident.

Columbus police refused to respond to Newsweek’s request for comments on the incident.

Several police officers can be seen holding pepper spray cans in both hands despite city officials saying last week that the officer would be prohibited from using the police. At the time, Columbus Mayor Andrew Ginther said the city would ban chemical agents like pepper spray to “immediately stop the use of tear gas and pepper spray to disperse non-aggressive and non-violent crowds.”

“We have been clear about respecting and protecting peaceful protest. We must also keep city streets open to the public to travel and protect residents from lawlessness, including drag racing, fire and injury in the past few nights. “said the mayor.

In events that led to the man who was stranded on the ground, police formed a tight line on bicycles and drove protesters from the intersection. Several videos show the man’s leg and foot prostheses lying next to him on the ground, but protesters who recorded the incident said on Reddit and Twitter that police removed them from the scene.

A professor at the Columbus College of Art & Design wrote on Twitter that she witnessed police officers confiscate the man’s leg prostheses. This could not be independently confirmed by Newsweek. “Today in Columbus, my husband was at the center of the protests and saw the police beat and beat an unarmed boy and then STEAL HIS LEGS,” Laurenn McCubbin tweeted Sunday.

An angle of the incident shows the man dragging his hands onto the sidewalk before other protesters offer assistance.

The mayor continued to defend the actions of the Columbus police on Sunday night, although he did not directly address the incident involving the double amputee. Protests resumed in Ohio University City, home of Ohio State University, on Friday as part of the June 15 commemorations. Crowds gathered on High Street between Broad and State streets for a street party that later turned into more organized protests.