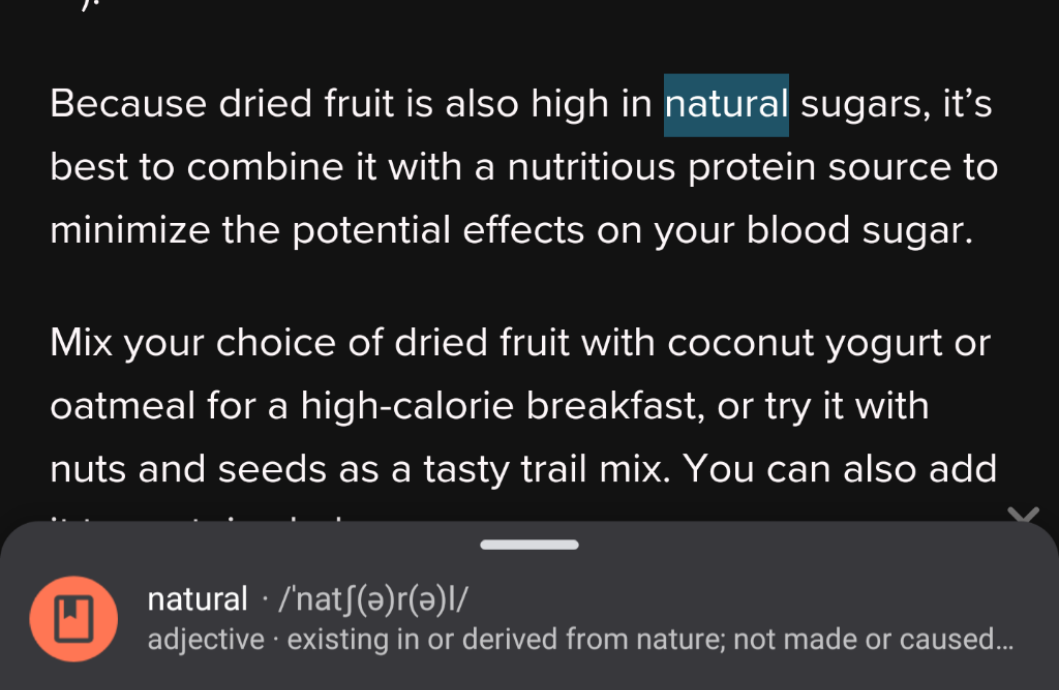 It seems like a feature is being implemented in Chrome that allows you to tap words on a page and easily see definitions and other details from the knowledge graph at the bottom of the screen. It looks like the feature hasn’t been widely implemented yet, and it may have been in testing for a while, but it seems to complement Chrome’s previous “touch / touch to search” functionality, which allows you to select words to perform a simple search in a dropdown tab.

The new feature works for both dictionary definitions, names, foods, chemicals, and probably many more item categories, displaying a small icon for a related image or book (in the case of word definitions) along with a short description. describing the thing In the case of dictionary results, it also includes a pronunciation guide. If you tap on a phrase or name that has multiple words, Chrome seems able to decipher the entire term quite easily.

Also note that if you press and hold instead of tapping, you will get the above, more basic touch to search feature.

A gallery of different results.

Like the existing (but slightly different) touch / touch to search functionality, opening the bar displays a tab for Google search results, taking you directly to relevant details on the Google Knowledge Graph. However, unlike the previous implementation, this page seems to be preloaded even before you lift it. The previous version of touch to search lacks both the additional icon / definition in its collapsed state, and also requires that the search be loaded separately when activated.

When you touch a word, the information appears (after a short delay). Raising that bar takes you to the results of the knowledge graph.

We can’t say how widely this new feature has been implemented yet. Again, it is very similar to touching the long-standing search functionality, but different in that it displays the knowledge graph results in a collapsed state. Several of us at Android Police have it in the latest stable version of Chrome (v83.0.4103.106), but our reporter reports seeing it in an out-of-date instance of the Brave browser.

In post-release testing, we have been able to verify that the function is controlled by a “Contextual Search Definitions” flag (located at chrome: // flags / # contextual-search-definition), and some recent servers may have Side shift is enabling the feature on more phones. We have successfully enabled it on devices that previously did not have it by enabling that brand.

The difference between a long press (which is still the old touch to search) and a short press.

However, the flag may have been around for a while. Another informant sent us similar details at the end of last year (although it seemed to work for less terms at the time). This could be a slow deployment, or Google may have retained the feature for some reason. (Or we all assumed he was old). But this recent and subtle change in behavior seems new in our tests. In the meantime, you can check if you have it with a single literal touch, and enabling it is easy if you don’t have it.