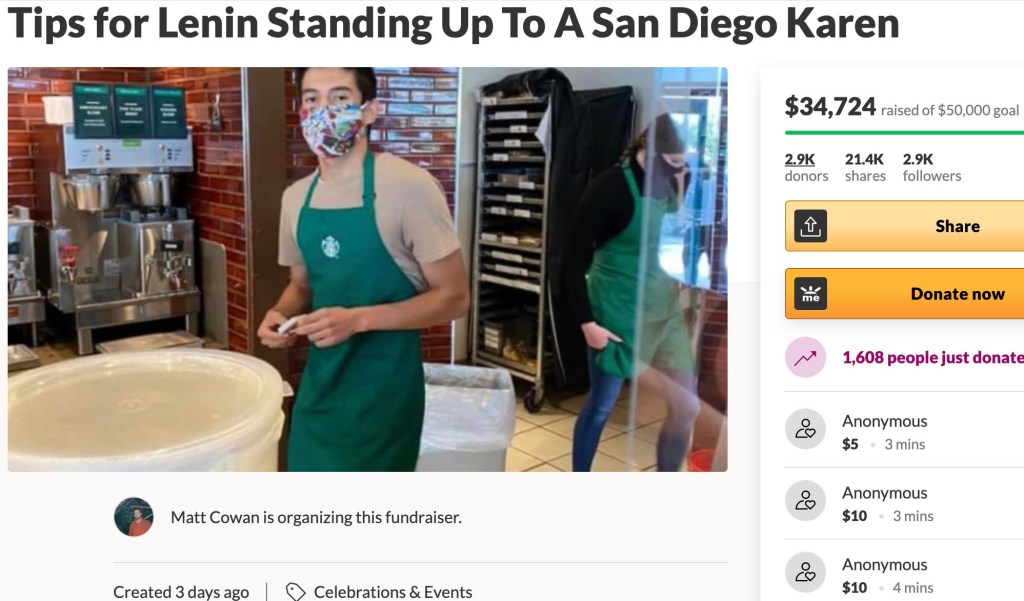 After a San Diego woman publicly called a Starbucks barista who asked her to wear a mask, she received more than $ 30,000 in contributions from GoFundMe.

The incident took place Monday at a Starbucks in the Clairemont neighborhood of San Diego. Facebook posts from both sides say barista Lenin Gutiérrez asked client Amber Lynn Gilles if she had a mask. She said that he “refused” to serve her. He said he intended to serve her after explaining the company’s policy, but that she “rejected me and said, no, I don’t need one and she started cursing a storm.”

Gilles asked for Gutiérrez’s name, took his photo and published it on his Facebook account with the title: “He knows Lenen from Starbucks who refused to serve me because I am not wearing a mask. Next time, I’ll wait for the police and file a medical exemption. “

He later deleted the post, but not before an Irvine man named Matt Cowan took a picture and created a GoFundMe page to raise money “for Lenin for his honorable effort to stand firm when faced with a Karen in the wild” . As of Friday morning, $ 34,000 had been donated.

Gutiérrez posted a video thanking donors and saying he planned to use the money to continue his dance education.

For her part, Gilles, who said she is a 35-year-old mother of three, told the San Diego television station KNSD that she has received “thousands” of death threats.

“They denied me and discriminated against me,” he told a KNSD journalist. “… Like I said, it starts with the coffee, but it ends with the mandatory digital certificates and the mark of the beast, all those forced vaccination things. You all know what I’m talking about.

A state directive issued last week told Californians to wear a mask when in public places to prevent the spread of the coronavirus.