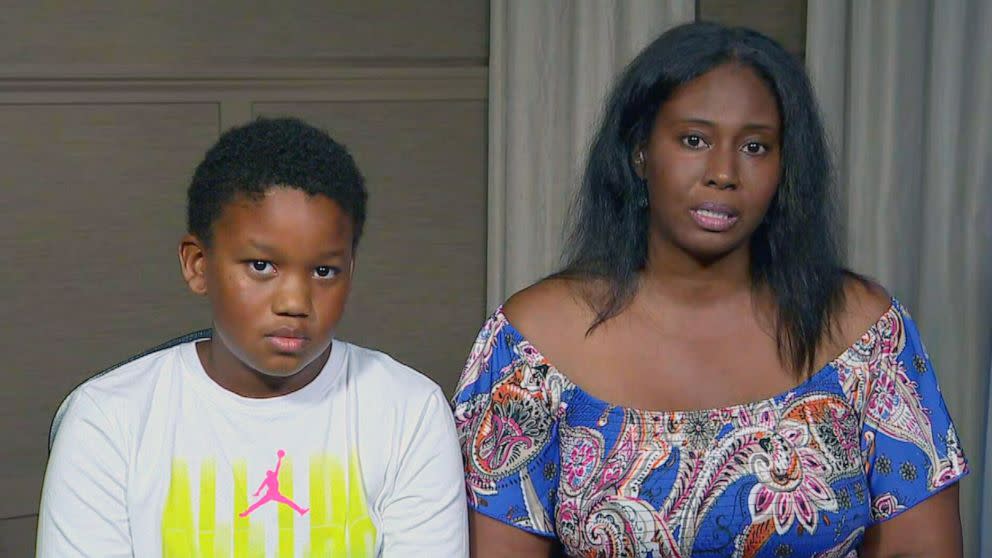 A black mother and her young son claim they were denied service at a Baltimore restaurant because of the color of their skin.

Marcia Grant and her 9-year-old son Dallas were rejected from sitting at Ouzo Bay, an upscale Greek restaurant in Maryland’s most populous city over the weekend. Grant used her cell phone to capture the confrontation with the restaurant manager on camera, and then posted the images on Facebook.

MORE: NASCAR’s Bubba Wallace was not the target of hate crimes, according to the FBI

An unidentified employee is seen telling Grant that his son’s outfit violates the restaurant’s dress code. The video shows Dallas wearing an Air Jordan shirt with sports shorts and sneakers. Grant then turns the camera on a white boy in a similar outfit who was dining outside at the restaurant.

“I really can’t say why they didn’t let me into the restaurant originally. But once I pointed out to the boy that there was a white boy there in a similar dress, I can only imagine that it was based on the fact that Dallas was black.” Grant told ABC News on Wednesday during an exclusive interview with Michael Strahan, co-host of “Good Morning America.”

“I kept insisting that, you know, the white boy has the same thing as Dallas, why don’t you let my son in?” She continued, holding back tears. “I just wouldn’t do it, regardless of how hard I pushed for [Dallas]”

Grant explained that it was the first time that his son had such an experience.

“He goes to a predominantly white school … and they teach the children that everyone is equal,” he added. “So for him to see a boy outside (at the restaurant) who looks like one of his friends at school, it was difficult for him.”

Still, Grant said this will not stop him from fighting racial inequality.

“He knows that I will always fight for him,” she said of her son. “We just have to keep pushing for social justice.”

Today, we learn of an incredibly disturbing incident that occurred at one of our Baltimore restaurants, Ouzo Bay. We sincerely apologize to Marcia Grant, her son, and everyone affected by this painful incident. This situation does not represent who or what Atlas represents. pic.twitter.com/jsofGRLVw1

“This should never have happened, the manager seen in the video has been put on indefinite license,” the company said in a statement. “We are sick from this incident. We sincerely apologize to Marcia Grant, her son, and everyone affected by this painful incident.”

The company also noted that they immediately revised their policy so that children 12 and under, accompanied by an adult, are not subject to the dress code at any of its properties.

“While the dress codes at Atlas properties are the result of continuous customer input, they are not intended to be discriminatory in any way,” the company added.

A Baltimore police officer who had seen the video recognized Dallas on the street Tuesday and detained the boy to tell him he was sorry about what happened.

“He said he could go home at any time for dinner,” Dallas said. “It makes me feel really good.”