Bengals owner ‘begged’ players not to kneel in 2017 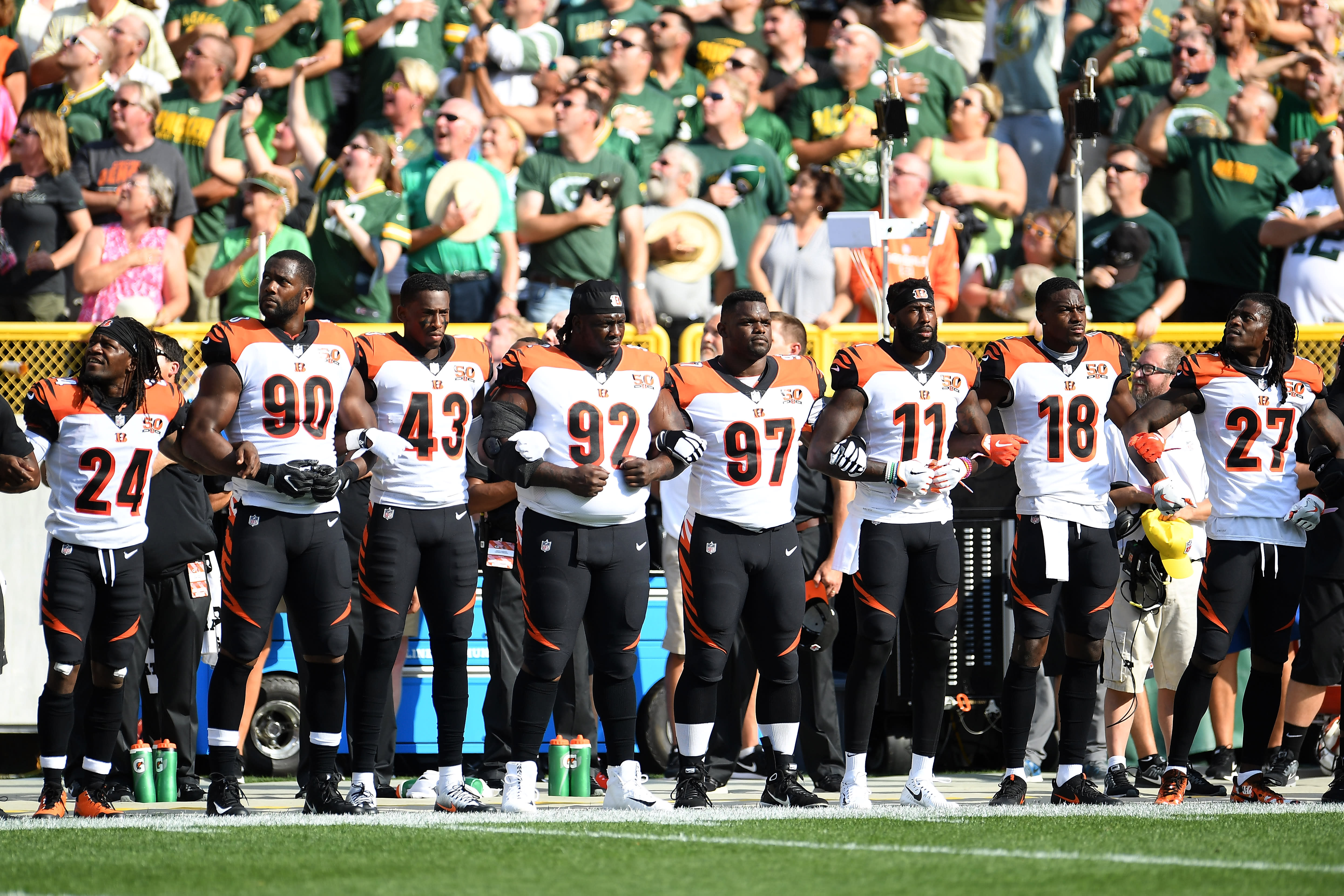 Seeing NFL players, coaches, teams, and even the league itself support the idea of ​​kneeling down during the national anthem to draw attention to racial injustice in 2020 is encouraging and also surprising, given what happened in 2016 and 2017.

A story by Elise Jesse of WLWT, an NBC affiliate in Cincinnati, sheds light on the conflicts players had in deciding to kneel at the time. The owners were concerned about a backlash from fans. Some were even concerned about what President Donald Trump would tweet.

In 2017, the players got angry after Trump memorably said that NFL owners should tell anyone to get down on their knees: “Get that son of a bitch off the field.” Members of the Cincinnati Bengals wanted to kneel down in a game two days after Trump’s comment.

Owner Mike Brown “begged” them not to do so in a rare appearance at a team meeting.

Bengalis were asked not to kneel

Jesse reported that he spoke to more than 10 2017 Bengals players, many of whom did not want to be cited on the record.

They recalled that the day before a road game in the Green Bay Packers, just after Trump’s speech, Brown spoke to the team. A player told Jesse that it was the first time the owner had done it in a meeting on Saturday.

“It almost says, ‘I don’t want them to kneel,'” one player told WLWT. “He said our fans will crush us.”

“He just begged, like he really begged. That was the first time I saw or heard anything like that, very emotional, “an unidentified player told Jesse. “That was my only moment seeing that it was different. The bottom line is that he was begging us, please don’t kneel. I didn’t want the negative effect that was going to come from him. “

In 2016, San Francisco 49ers quarterback Colin Kaepernick began the move. For 2017 he had no signature, and he has yet to receive another opportunity with the NFL. Former Bengals safety George Iloka said he and many other players wanted to kneel. They feared the repercussion. No one knelt, closing their arms during the hymn, although Iloka spoke to Brown at the meeting about what she felt.

“My heart was beating because he owns it, and you’ve seen what happened to Kaepernick,” Iloka said.

Iloka said she tried to tell Brown why she wanted to kneel, but Brown “was not trying to hear it.” One player told Jesse that he did not kneel because if he did he was concerned that he would not get a good contract offer the following year. Other players “had the same feeling,” according to Jesse.

The Bengals denied that Brown forced the players not to kneel and told WLWT that “Mr. Brown shared with the players his preference, but said he was not telling them what to do.”

Preston Brown, who joined the Bengals in 2018, was with the Buffalo Bills in 2017 and said he regretted not kneeling at the time.

“That’s the biggest regret I have for not kneeling that day because I was so scared to do it,” Brown told Jesse. “I know what might happen next. You have to play this role as an athlete and follow the line to make sure they still like you. I can’t be completely black.”

Bengals did not receive the support of all his teammates.

This was what black players faced in 2016 and 2017. The NFL clearly wanted Kaepernick out of the league after he led the movement; The NFL had to settle a collusion claim with Kaepernick and fellow 49ers teammate Eric Reid after a complaint was filed.

The players feared that their careers would be taken from them, and the Bengals players told Jesse that there was also no full support from all his teammates. Iloka spoke about an informal player-led meeting attended by about 30 players, half black and half white. One player said he felt the black players wanted to kneel down “and then it was the white players who told us, ‘You don’t need to do that.'”

In 2020, we see a lot of messages from white players saying they want to listen to their black teammates and support the cause. That was not the case a few years ago, at least in Iloka’s opinion.

“It’s almost like saying, ‘Go get oppressed somewhere else and keep it out of my sight,'” Iloka told Jesse. “That kind of thing. So, you know, it was like I understand that you don’t understand how he feels and we’re not asking him to join us, but to just stop telling us not to.”

The players, black and white, have said they will kneel in 2020. Houston Texans coach Bill O’Brien, who is white, has already said he plans to kneel with his players.

It looks like this time will be different when it comes to peaceful protests. Even if Trump is already starting to fight him.