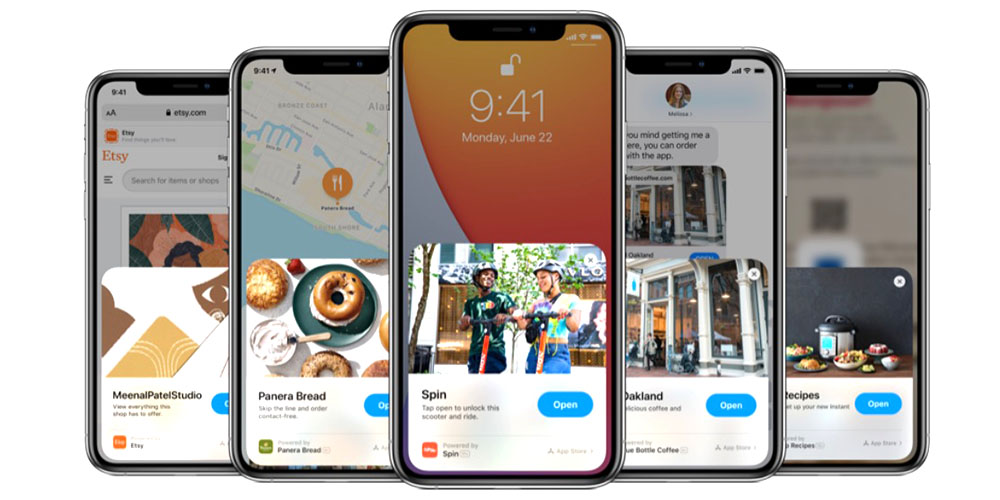 One of the iOS 14 features that Apple highlighted in its new WWDC keynote format was App Clips – a really quick way to download just enough of an app to do a specific task, like paying for car parking space.

Having to download, install and register an application for single use only is one of the most annoying facets of modern life, and App Clips seems like a very good solution. Just hold your phone close to an NFC tag or scan a QR code; use Sign in with Apple to avoid the need to register and add a credit card; and just do the thing.

The app clips themselves don’t need 5G. Apple requires that they have a maximum of 10 MB, so they will be downloaded quickly on existing LTE networks. But PC Mag’s Sascha Segan sees them as the beginning.

In 2007, Steve Jobs quoted Wayne Gretzky as saying “I skate where the record is going to be, not where it has been.” And the album will definitely be in 5G […]

I think App Clips is just the beginning of a new application development paradigm that will be enriched with 5G. With App Clips, Apple developers have to start thinking about what code really needs to reside on a device, and I suspect they’ll be given new APIs to access executable code that lives in the cloud. As 5G networks become widespread from 2021 to 2023 and beyond, more applications will start with clips […]

The 5G transition will take years, and end users may not even realize that their apps are slowly moving to the cloud. They will notice more free space on their devices, or less expensive devices because they need less storage, and they will notice that their experience with applications becomes more fluid, with applications that flow in and out of their lives as necessary.

Segan acknowledges that 5G networks still don’t have anything like the scope to make this new approach possible today, but says Apple is already skidding in this direction.

I think we’re going to hear more about Apple’s 5G vision in its iPhone announcement this September. But until 5G networks themselves provide a new level of performance with decent coverage, Apple probably won’t reproduce the feature. Instead, it will begin to shift its developers towards 5G-compatible paradigms so that when new networks hit the big box, Apple is there.

He says that while Android has had essentially the same feature since 2016, with the Instant Apps brand, the idea has not yet taken off. Without Apple on board, companies likely decided it would be too confusing to make it work for some customers but not others.

Now that Apple not only offers the feature but gives it prominence, it is likely to become widespread this year. Given Apple’s enthusiasm for all things cloud, I think Segan is right that it’s likely to be an address rather than a destination.