Antarctic mystery: origins of the fossil ‘The Thing’ revealed by scientists | Science | News 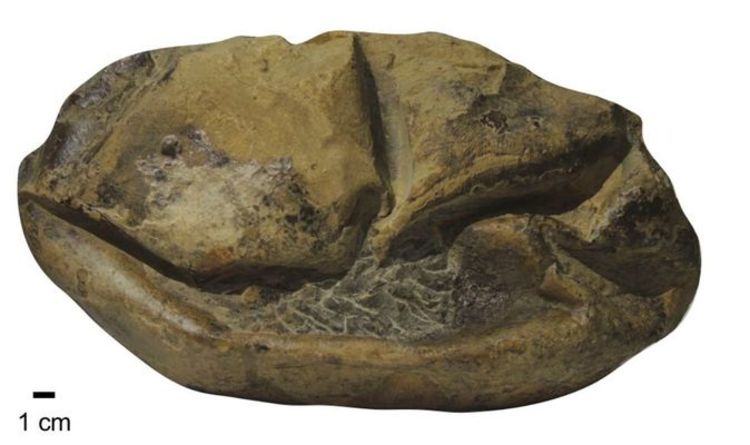 In 2011, researchers from Chile discovered a mysterious deflated rugby ball fossil in Antarctica. The object has been sitting in Chile’s National Museum of Natural History for almost a decade, and scientists have been unable to determine its origin. The rock-shaped object was so puzzling that scientists simply referred to it as “The Thing”.

However, experts from the University of Texas at Austin analyzed the fossil and discovered that it is a giant soft-shell egg from approximately 66 million years ago.

At 11 inches by 7 inches, it is the largest soft shell egg ever discovered, and the first fossilized egg discovered in Antarctica.

The soft-shell egg did not come from dinosaurs, but from a giant reptile, according to research published in the journal Nature.

Lead author Lucas Legendre, a postdoctoral researcher at the Jackson School of Geosciences at the University of Austin, UT Austin, said: “It is an animal the size of a large dinosaur, but it is completely different than a dinosaur egg.

“It is very similar to the eggs of lizards and snakes, but it is from a truly giant relative of these animals.”

The shell had deflated since what was inside had hatched 66 million years ago.

But by comparing the shell with 259 live reptile eggs, Legendre found a correlation between the size of the reptiles and their eggs.

In doing so, the reptile that laid the ancient egg would have to be more than 20 feet long from the tip of its snout to the end of its body, not counting a tail.

“The other involves the reptile laying eggs on a beach, and the young scurrying in the ocean like tiny sea turtles.”

The researchers say this would require some graceful maneuvering by the mother because the giant marine reptiles were too heavy to support their body weight on land.

“Laying the eggs would require the reptile to wag its tail on the shore while remaining submerged and supported by the water.”