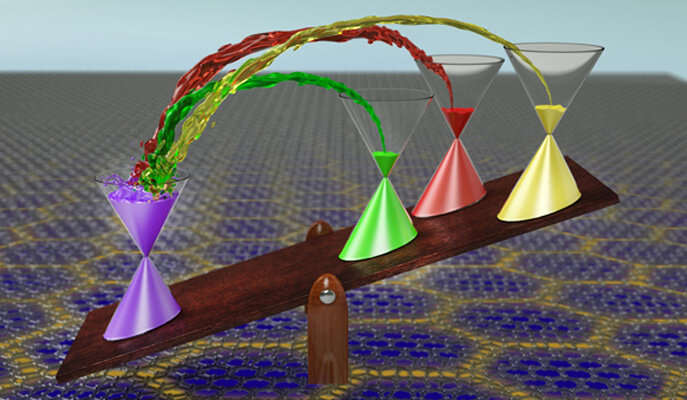 In 2018, it was discovered that two graphene layers twisted with respect to each other by a “magic” angle show a variety of interesting quantum phases, including superconductivity, magnetism, and insulating behaviors. Now, a team of researchers from the Weizmann Institute of Sciences led by Prof. Shahal Ilani of the Department of Physics of Condensed Matter, in collaboration with the group of Prof. Pablo Jarillo-Herrero at MIT, discovered that these quantum phases descend from a previously unknown level – “parent state” energy with an unusual break in symmetry.

Graphene is a flat, single-atom thick crystal of carbon. When two sheets of this material are placed one on top of the other, misaligned at a small angle, a periodic pattern of “moire” appears. This pattern provides an artificial network for the electrons in the material. In this twisted bilayer system, the electrons come in four “flavors”: “up” or “down” turns, combined with two “valleys” that originate from the hexagonal graphene network. As a result, each moire site can contain up to four electrons, one of each flavor.

While the researchers already knew that the system behaves like a simple insulator when all moire sites are completely full (four electrons per site), Jarillo-Herrero and his colleagues discovered to their surprise, in 2018, that at an angle ” Magical “specific, the twisted system also becomes insulating in other integer fillers (two or three electrons per moire site). This behavior, exhibited by magic angle twisted bilayer graphene (MATBG), cannot be explained by single particle physics, and is often described as a “correlated Mott insulator”. Even more surprising was the discovery of exotic superconductivity near these fillings. These findings led to a host of research activities aimed at answering the big question: what is the nature of the new exotic states discovered in MATBG and similar twisted systems?

Weizmann’s team set out to understand how the interacting electrons in MATBG behave using a unique type of microscope that uses a single-electron transistor of carbon nanotubes, located at the edge of a scanning probe overhang. This instrument can visualize, in real space, the electrical potential produced by electrons in a material with extreme sensitivity.

Compressibility also reveals the “effective mass” of the electrons. For example, in regular graphene, the electrons are extremely “light” and therefore behave as independent particles that practically ignore the presence of their fellow electrons. In magic angle graphene, on the other hand, electrons are believed to be extremely “heavy” and their behavior is dominated by interactions with other electrons, a fact that many researchers attribute to the exotic phases found in this material. Therefore, Weizmann’s team expected compressibility to show a very simple pattern based on electron filler: the exchange between a highly compressible metal with heavy electrons and incompressible Mott insulators that appear in each entire moire lattice filler. .

To their surprise, they observed a very different pattern. Instead of a symmetrical transition from metal to insulator and back to metal, they observed a sharp asymmetric jump in electronic compressibility near the entire fillers.

“This means that the nature of carriers before and after this transition is very different,” says study lead author Uri Zondiner. “Before the transition, the carriers are extremely heavy, and after that they appear to be extremely light, reminiscent of the ‘Dirac electrons’ that are present in graphene.”

The same behavior was observed to repeat near each entire filler, where the heavy carriers abruptly yielded and Dirac-like light electrons resurfaced.

But how can such an abrupt change in the nature of carriers be understood? To address this question, the team worked alongside the Weizmann Profs theorists. Erez Berg, Yuval Oreg and Ady Stern, and Dr. Raquel Quiroez; as well as Prof. Felix von-Oppen from the Freie Universität Berlin. They built a simple model, revealing that the electrons fill the energy bands in MATBG in a very unusual “Sisyphean” way: when the electrons begin to fill from the “Dirac point” (the point where the valence and conduction bands meet touch each other), behave normally, are equally distributed among the four possible flavors. “However, when filling approaches one integer number of electrons per moire supernet site, a dramatic phase transition occurs,” explains study lead author Asaf Rozen. “In this transition, a flavor ‘grabs’ all the carriers of its peers, ‘restoring’ them to the point of Dirac neutral to cargo.”

“With no electrons, the remaining three flavors must begin to refill again from scratch. They do so until another phase transition occurs, where this time one of the remaining three flavors grabs all of the carriers from their peers, pushing them back to the point “Therefore, the electrons need to scale a mountain like Sisyphus, constantly being pushed to the starting point where they return to the behavior of light Dirac electrons,” says Rozen. While this system is in a state Highly symmetrical with low carrier fillers, in which all electronic flavors are equally populated, with increased filling you experience a cascade of symmetry-breaking phase transitions that repeatedly reduce your symmetry.

“The most surprising thing is that the phase transitions and Dirac revivals we discovered appear at temperatures well above the onset of the superconducting and correlated insulating states observed so far,” says Ilani. “This indicates that the state of broken symmetry that we have seen is, in fact, the ‘parent state’ from which the most fragile correlated and superconducting insulating ground states emerge.”

The peculiar way symmetry is broken has important implications for the nature of insulating and superconducting states in this twisted system.

A similar cascade of phase transitions was reported in another article published in the same Nature number of Prof. Ali Yazdani and colleagues from Princeton University. “The Princeton team studied MATBG using a completely different experimental technique, based on a highly sensitive scanning tunnel microscope, so it is very reassuring to see that complementary techniques lead to similar observations,” says Ilani.

The Weizmann and MIT researchers say they will now use their scanning nanotube single electron transistor platform to answer these and other basic questions about electrons in various kink-shell systems: What is the relationship between the compressibility of the electrons and its apparent transport properties? What is the nature of the correlated states that form in these systems at low temperatures? And what are the fundamental quasiparticles that make up these states?

The study, “Cascade of Phase Transitions and Dirac Revivals at Graphene’s Magic Angle,” was published June 11 in the journal Nature.

Provided by the Weizmann Institute of Science