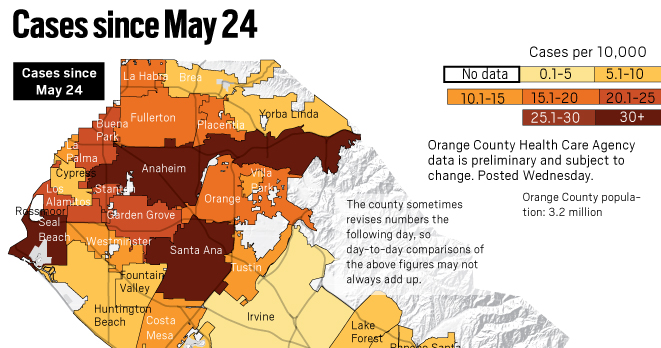 The Orange County Health Care Agency reported Wednesday, June 24, another 26 deaths, bringing the total to the county since coronavirus monitoring began to 299.

Of the deceased, 152 were residents of skilled nursing facilities, compared to 138 in Tuesday’s daily report.

There were 354 new coronavirus cases, bringing the county’s cumulative total to 11,016 cases since testing began. Of the total, 1,099 have been in skilled nursing facilities and 391 were Orange County inmates.

The seven-day average for cases is 274, compared to 251 in the previous report.

The county also began releasing an estimate of the number of virus recoveries, which was 5,249 as of Wednesday. Recoveries are based on the cumulative case count of the previous 28 days.

According to the California Department of Health, there have been 90 deaths in Orange County in the past 14 days.

The state agency reports 485 hospitalized patients in the past 14 days (suspicious and positive) at 33 hospitals across the county as of June 23. The state coronavirus control panel also shows that Orange County has at least 39% of its ICU beds still available.

The latest OCHCA data, which is from June 22, included 363 hospitalizations and 145 people in the ICU. Orange County data represents the 26 hospitals with authorized emergency reception centers and beds in the ICU.

The cumulative total of tests across the county increased to 227,962, with data as of June 23. The seven-day average trend for daily tests performed is 3,800. Total test results take several days to compile.

County data shows that 17% of all cases are over age 65, the same age group accounting for 75% of deaths.

NOTE: The first map shows total cases in Orange County, the second map shows how many cases from May 24 to June 24.

Orange County Hospitalizations as of June 23: