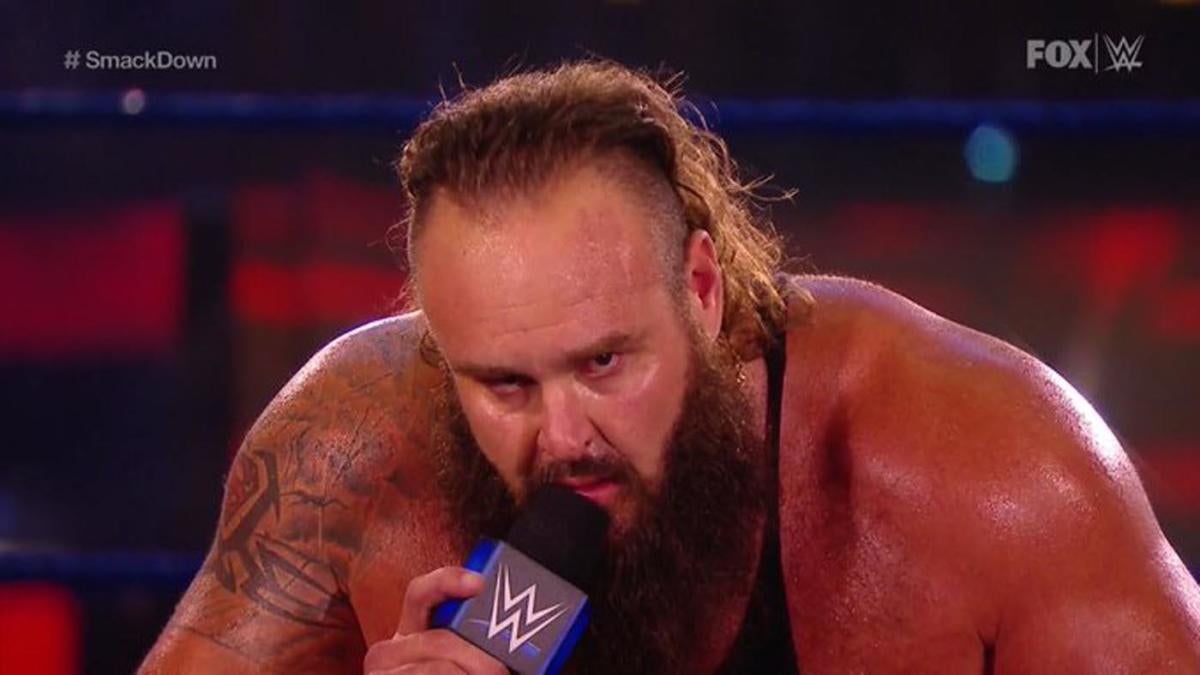 On a night SmackDown paid tribute to The Undertaker, the biggest story to come out of the show surrounds a couple of other characters straight out of a horror story. After Bray Wyatt smashed his former Wyatt family leader character last week in an attempt to enter Braun Strowman’s mind, the universal champion responded with an unusual challenge.

Strowman addressed Wyatt’s mind games when speaking about his time in the Wyatt Family, saying that Wyatt was the first man to make him truly fear and telling the story of Bray being bitten by a snake when they were sitting on the edge of the swamp. He then presented a challenge for a title fight in the upcoming pay-per-view of Extreme Rules: The Horror Show, asking Wyatt to return to the swamp to face him.

You can check out the full results and highlights of the show below, including a main event born out of King Corbin’s disrespect for The Undertaker on his tribute night.

No. 1 Contender Match – Nikki Cross def. Lacey Evans (via pinfall), Alexa Bliss and Dana Brooke: Bliss and Cross briefly worked together initially, as expected, before Cross made a move toward his partner. The two agreed that it was nothing personal and all about a title shot when the game returned to normal flow. Brooke got down on her knees to block an attempt by Bliss’ Twisted Bliss, and a few moments later, she went looking for a back, but she ate a Woman’s Right by Evans. Then Evans was caught in a roll-up by Cross for the pinfall, making Cross the challenger for the Bayley SmackDown women’s title at Extreme Rules. Decent four-way pacing and interesting setup for the next pay-per-view. Grade b

Fight House Party and The New Day def. The Miz, John Morrison, Cesaro, and Shinsuke Nakamura via pinfall: After Cesaro and Nakamura pinned New Day weeks ago, they were looking to make a point with a second win in tag action. Kingston remained isolated for a good part of the match, struggling to achieve the best mark, but was repeatedly interrupted. A Kingston jumping twice over Nakamura allowed him to tag Metalik, who went in and out of Morrison, Miz and Cesaro. Dorado was tagged and hit a top-rope Shooting Star Press in Morrison for a near fall before a fight between New Day and Cesaro and Nakamura broke out. The two teams fought back, leaving Miz and Morrison against Lucha House Party. Dorado pulled Morrison with a frog from the top rope to the outside and Metalik hit Miz with an elbow drop for victory. This was a really fun tag match with some really fun stretches, including Cesaro and Dorado, which show some fun chemistry. Grade b

Braun Strowman challenged Bray Wyatt to return to the swamp: Strowman spoke about the first time he met Wyatt, saying it was the first time in his life that he had felt true fear. Strowman said they were sitting on the edge of the swamp and a snake crawled over to Wyatt’s flashlight, but before he could kill it, Wyatt said no. Wyatt came face to face with the snake and was bitten several times while Wyatt laughed. Strowman said Wyatt is “the devil himself”, he spent time doing “the devil’s job” and that he loved every second of it. Strowman then suggested they return to the swamp. Strowman said he would break Wyatt’s body before dragging him into the swamp for the alligators to finish him off. When Wyatt’s laughter echoed through the building, Strowman laughed. Shortly after SmackDown went off the air, the Wyatt Swamp Fight between the two, with no universal title on the line, became official for Extreme Rules. A better promotional job than Strowman’s normal, and the prospect of another cinematic encounter involving Wyatt is certainly appealing. Grade B-

Jeff Hardy def. King Corbin by pinfall: Throughout the first hour of the show, The Undertaker’s WrestleMania 36 showdown with AJ Styles in a Boneyard Match spread with legends like Edge, John Cena, Bret Hart and Ric Flair talking about the things that made Undertaker special. Corbin then paid tribute in the only way he knows how: cutting a promotion in the ring at The Undertaker before ending by saying “you suck,” which led Jeff Hardy to the ring to quickly beat up and stage the fight.

Corbin taunted The Undertaker mid-game, kneeling down and striking Taker’s familiar pose. That brought the face wardrobe to surround the ring and cheer on Hardy. Corbin established firm control of the match for a long period after the locker room was emptied, but Hardy finally made the long-awaited return before the action came out and Corbin rammed into the ring steps. That prepared Corbin for the finale with Hardy hitting a Swanton bomb for the pinfall victory. Corbin attacked Hardy after the game, then eliminated Kofi Kingston when he tried to save, but Big E eliminated Corbin with a Big Ending. Strowman then entered the ring and hit Corbin with a power attack. Hardy called Riddle into the ring to hit a floating brother before the show came off the air with the locker room singing again, “Thank you, Taker.” This was a decent event, albeit far from spectacular, as Corbin has become the heel for situations like this and Hardy is now in a race. Grade: C +