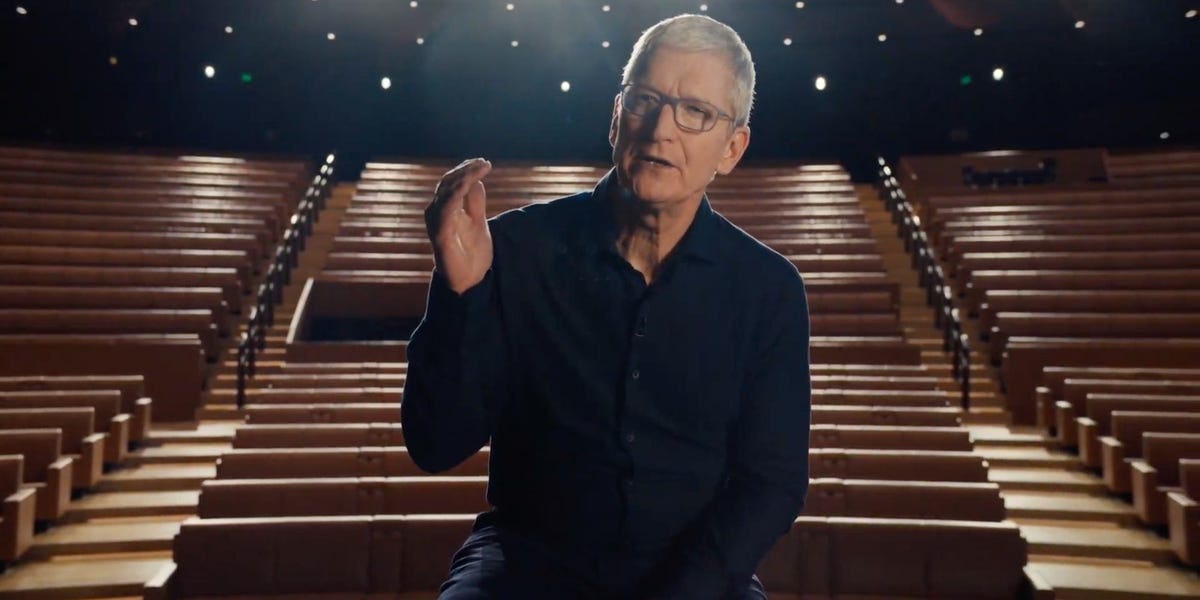 Hello and welcome back to Trending, Business Insider’s weekly look at the world of technology. I’m Alexei Oreskovic, Head of the West Coast Business Insider Office and Global Technology Editor. If you want to get trends in your email inbox every Wednesday, click here.

This week: Tim Cook takes Apple to a new frontier

Apple’s leadership team showed up on Monday to work on the green screen when the iPhone maker hosted the first virtual edition of the developer conference. Tim Cook, Craig Federighi, and the rest of the gang were there, doing their best impersonations of a QVC host, grooming him for the camera, and selling all the latest features and innovations made in Cupertino.

Depending on who you ask, the virtual format was either an awkward infomercial or a much more efficient format that should become the norm.

The main news of the event was the defenestration of Intel, with Apple confirming that it was ripping Intel’s microprocessors off its Mac motherboards for years to come and replacing them with its own homemade silicon.

Apple also continued to beat the privacy drum, announcing new “food nutrition” labels for apps that will show you all the personal data an app is tracking about you.

Privacy is becoming increasingly important to Apple as it competes with Google for users and developers. But what Apple probably didn’t expect, as it was planning its WWDC announcements, was that its enemy, Google, would receive a goodwill boost without doing anything.

This is because Apple’s App Store was hit by a wave of negative news just before WWDC, which included a couple of EU investigations and a high-profile dispute with the developer of a new email app called Hey Apple’s threats to block Hey from the App Store made him seem like the bad boy compared to Google and his direct treatment of app developers.

The move appeased developers, and Apple finally emerged without taking too much damage. But with Apple trying to differentiate itself from Google based on its privacy policies, the episode was an unwanted and unplanned script change on its big day, and it may not be the last time.

Earlier this month, Alphabet CEO Sundar Pichai made some changes to Google’s senior leadership team. The management shake-up comes as Google is navigating a pandemic that some analysts believe could drive the company’s revenue down for the first time, as well as mounting regulatory scrutiny and employee unrest.

In other words, Pichai’s direct reporting team has its work done for them. Take a look at the profiles of Hugh Langley in the 15 executives who report directly to Pichai:

“We have been silent for too long as these platforms have amplified polarization within our society and have funded it.”

– Joy Howard, director of marketing for Dashlane, tells Rob Price of Business Insider why the company joined the boycott of Facebook advertisers, along with Patagonia, Talkspace, REI and others.

There is more to see in Wisconsin than cows and corn. As a sharp-eyed cheesehead recently noticed, Elon Musk appears to have planted a crop of space-based futuristic internet receivers in Wisconsin’s fertile soil.

The mysterious and bulbous devices, hidden among rows of corn kernels in Merrillan, Wisconsin and discovered by a telephoto Reddit user by the name of darkpenguin22, appear to be the clearest images yet of terrestrial antennas for Starlink satellites.

Starlink, of course, is the Internet-transmitting satellite fleet that is in orbit by Musk’s SpaceX company. Dave Mosher has the full story here.

Former Pinterest employees describe a traumatic workplace in which managers humiliate employees until they cry, blacks feel alienated, and the toxic culture ‘takes away the soul’

This startup allows technicians fleeing Silicon Valley to work on remote engineering projects for large companies, and Nestlé, TaskRabbit, and NASA are already using it.

Legendary venture capitalist Marc Andreessen schedules every part of his day, even when he sleeps, to avoid becoming an exhausted micromanager.

The leading executive news producer on Snapchat left the company.

Not necessarily in technology:

A “frat party” workplace, a tweet that led to the CEO’s resignation, and a culture that demeans women: Experts say this is the reality of working for the CrossFit gym.

Et voila, that’s it for this week. Thanks for reading, and remember, if you like this newsletter, tell your friends and colleagues that they can subscribe here to receive it.