‘Total pandemonium’: what went wrong in a veteran’s home where 76 people died 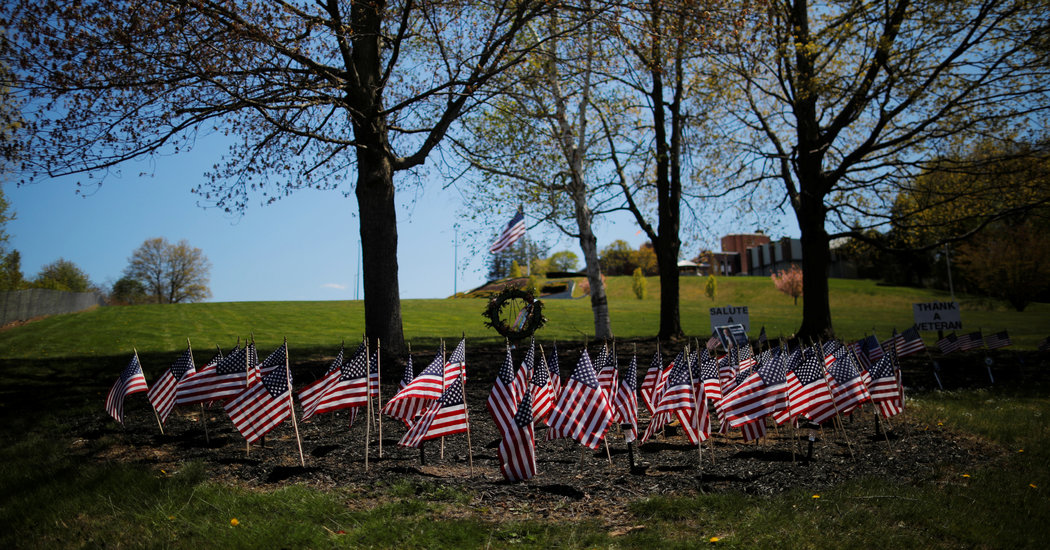 BOSTON – An investigation into 76 coronavirus-related deaths at a state-run veterans home in Massachusetts paints a picture of a facility in chaos, as traumatized nurses on orders to combine wards of infected and uninfected men, knowing that the move would prove fatal to many of his patients.

Workers at the facility, the Holyoke Soldiers Home, recalled the days in late March as a “total pandemonium” and a “nightmare.”

A social worker told investigators, in a report released Wednesday, that “I felt the concentration camp was being moved, that we were moving these unknown veterans to die.”

Another recalled sitting in a makeshift room that was filled with sick and dying patients, some without clothes or masks, and trying to distract a man who was “alert and oriented”, chattering about the Swedish meatballs his wife used to make.

“It was surreal,” he said. “I don’t know what the personnel of that unit will be like, how many of us will ever recover from those images.”

Nursing home deaths have accounted for more than 60 percent of coronavirus deaths in Massachusetts, a state that prides itself on its healthcare system. None of those deaths has received more attention than the group at the Holyoke Soldiers Home, which housed fragile veterans of World War II and other conflicts.

The 174-page independent report, led by former US Attorney Mark Pearlstein, criticizes the decisions made by the facility’s superintendent, Bennett Walsh, as “completely baffling from an infection control perspective.”

The report was especially scathing about the decision to combine crowded rooms. But it catalogs a number of other errors, including failure to isolate infected veterans, failure to assess veterans who had symptoms, and rotation of staff members between wards, speeding up the spread of the virus.

“In summary, this was the opposite of infection control: Mr. Walsh and his team created a near-optimal environment for the spread of Covid-19,” the report said.

Massachusetts Governor Charlie Baker said Wednesday that the accounts in the report were “one of the most depressing and embarrassing descriptions of what was supposed to be a care system I have heard of.”

The state is acting to fire Mr. Walsh, a retired Marine Corps lieutenant colonel with no previous nursing home experience, the governor said. An attorney for Mr. Walsh was not immediately available for comment.

Mr. Walsh’s supervisor, Francisco Urena, resigned from his position as secretary of state veterans services on Tuesday in anticipation of the report. Baker said the secretary was asked to resign.

“Our administration did not do the work that we should have done supervising Bennett Walsh and the House of Soldiers,” Baker said.

“I am so sorry,” Urena told a journalist at WCVB, a local television station. “I did my best.”

Staff members told investigators that they were initially discouraged from wearing protective gear, in an effort to conserve a limited supply, and that they felt “upset, paranoid and fearful for their lives because they were unable to find masks,” the report said. .

The most troublesome parts of the report describe the weekend of March 28-29, when staff were so scarce in the house that two rooms were hastily combined, a decision one employee described as “the craziest thing I’ve ever seen in all my life. “

Several staff members told investigators that, in the confusion, some of the dying men did not receive adequate pain relief medication.

None of the facility’s top managers acknowledged taking part in the decision to combine the two rooms, and its medical director, David Clinton, told investigators that he was not consulted.

“We believe this is not credible and at least that Dr. Clinton was aware (or should have been aware) of the movement and did nothing to stop it,” the report said.

Val Liptak, the acting administrator hired to handle the crisis, told investigators that although she and her team had “more than 90 collective nursing years” among them, “none of us has seen anything like this.” The overcrowded room, he said, “looked like a war zone.”

One of the disturbing revelations in the report was that supervisors had instructed social workers to call the families of sick veterans and try to persuade them to change their healthcare preferences at the end of their lives, so that veterans were not transferred to a hospital.

A social worker said she stopped making those calls because “she felt bad,” as she put it, “deep in my belly and heart.”