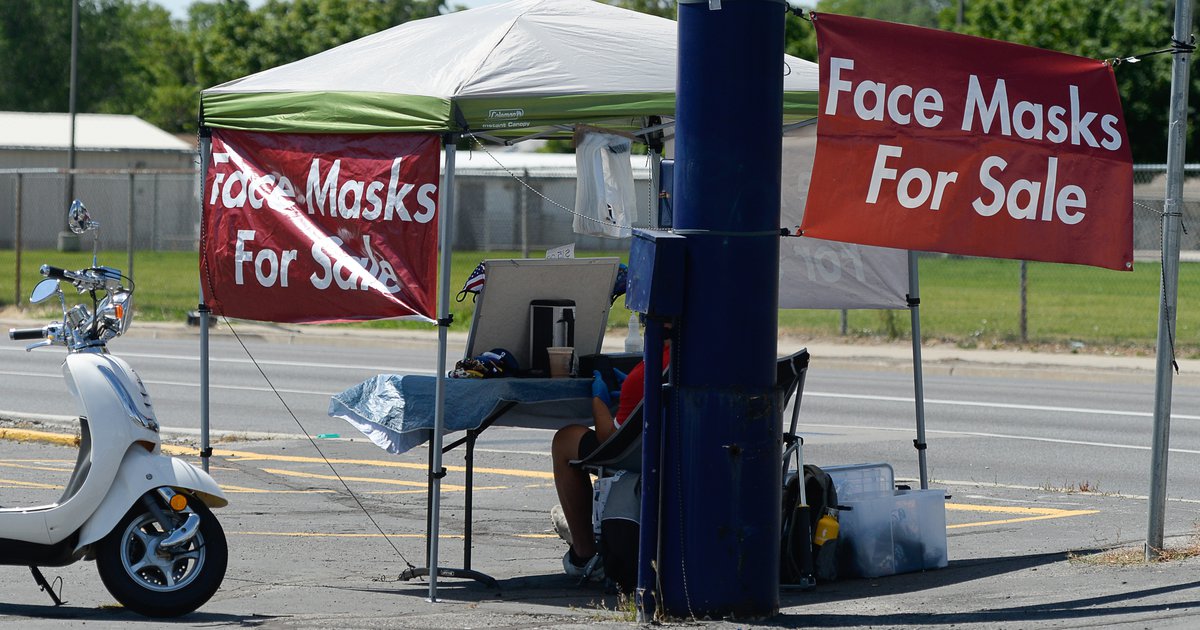 sUtah experienced a 578 increase in COVID-19 on Saturday as an increase in infections continued to stress medical providers and hospital capacity.

That brought the state’s total to 20,628 positive cases so far in the pandemic, a daily rate increase of 2.9% from Friday. The state reported an additional death from the virus, that of a San Juan County woman over 85 who was hospitalized when she died. Utah’s overall death count from the coronavirus is now 167.

And at several grim milestones, global COVID-19 cases appeared to top 10 million by the end of Saturday or early Sunday, according to Johns Hopkins University, as global deaths approached 500,000, while at the same time, EE It reached 2.5 million cases and had just exceeded 125,000 deaths, the highest number in any country.

The Utah Department of Health also reported Saturday that the state had conducted 5,234 tests for the coronavirus since Friday, bringing the rate of positive results in Utah to 6.4% of all examinees.

The news comes a day after Dr. Angela Dunn, a state epidemiologist, issued a dire warning that the increase in the number of cases meant that all residents should wear a mask, whether required in their county or not. Without “a large-scale behavioral change by all Utahns to reverse this trend,” she said, death counts and hospitalizations would only increase.

Forty-four more people had been hospitalized by COVID-19, for a total of 189 cases in the hospital as of Saturday. That brings to 1,365 the total number of people hospitalized in Utah since the pandemic began, the department reported.

The pandemic also showed signs on Saturday of further spread to areas far from the Wasatch Front.

Dr. Patrick Carroll, medical director of Dixie Regional Medical Center, warned that St. George’s Hospital had nearly reached capacity earlier in the week and stayed close to that limit amid continued spikes in infections and hospitalizations for COVID-19.

He urged people in the region to wear masks and social distance in hopes of preventing the situation from worsening.

The St. George facility has 32 ICU beds, but had contingency plans to create a temporary “surge” ICU, reportedly with the potential for up to 89 ICU beds. The hospital was close last week to enact that plan, Carroll said.

However, even that capacity had potential to fill, Carroll said, in light of COVID-19 patients who needed an average of 30 days or more of ICU treatment. He calculated on Friday that a third of ICU beds were occupied by patients with COVID-19, and Carroll expressed concern about the possibility of treating those who need ICU care for other reasons.

Opening the surge unit could also stretch staff capacity, Carroll said. The hospital was considering asking for a favor owed to it by New York hospitals, where medical personnel from Dixie Regional and Cedar City Hospital had helped in April.

Washington County topped its 1,000th person infected with COVID-19 on Thursday, when it reached 1,011 cases, up from 374 in early June.

A spokeswoman for Dixie Regional Medical Center said the hospital had not reached ICU capacity until Saturday afternoon.

Across the state, Utah has seen COVID-19 hospitalizations nearly double since Memorial Day, from 692 patients to 1,365 as of Saturday. A total of 353 of those new hospitalizations have occurred in the past two weeks.

Only Salt Lake County has seen its number of cases increase by 19.9% ​​in the past week and by 127% since Memorial Day.

Harmons Grocery announced Friday that its customers will be required to wear face masks while shopping indoors, starting Saturday at all of its stores located in Salt Lake County and beginning July 5 at other locations in Utah.

The Utah Transit Authority began Saturday to meet new mask requirements in Salt Lake and Summit counties. The agency said in a statement that it will also require facial covers for passengers and employees on trains and buses in Utah, Davis, Weber, Tooele and Box Elder counties beginning Wednesday.

UTA said in a statement that it would provide face masks for passengers in need, available at UTA customer service locations and, eventually, in transit vehicles.