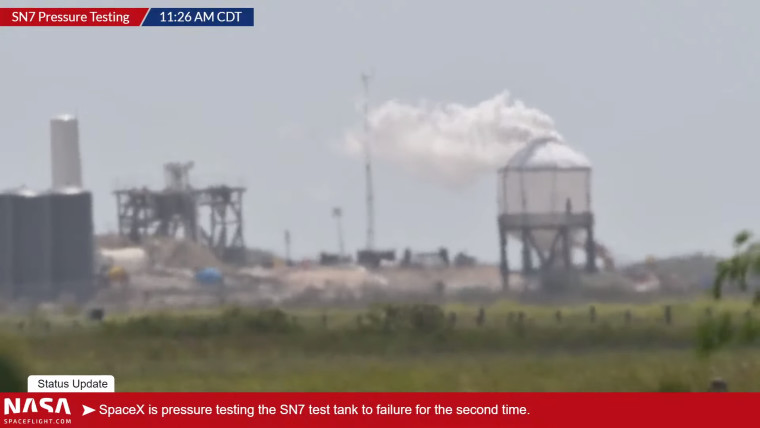 The development of the spacecraft has accelerated in recent weeks. On Tuesday, June 23, SpaceX took the fuel tank of the SN7 prototype for yet another test. This time, it was the cryogenic pressure test for failure in Boca Chica, Texas (via Space.com).

The test began by filling the fuel tank with supercooled liquid nitrogen to verify if the tank can hold the thruster for a real launch. The fuel tank was tested beyond its limit before giving in and “exploded” quite dramatically. Soon, thick columns of white nitrogen covered the test site along with what was left of the fuel tank.

This was the second cryogenic pressure test until failure for the SN7 prototype. After the first test, the spacecraft was repaired for further tests. Furthermore, unlike the SN4 prototype that exploded at the test site on May 30 due to a leak, the SN7 was intentionally subjected to more pressure than it was built to withstand so that data vital to the development of Starship can be collected. .

This month has been pretty hectic for the Starship initiative at SpaceX. First, the company’s founder and CEO notified employees that they viewed the Starship project as the highest priority for the foreseeable future. Then we received confirmation that the company was building floating spaceports for the spacecraft’s raison d’etre: space travel and hypersonic flights. However, the first test flights for the rocket are not expected before a couple of years at least.