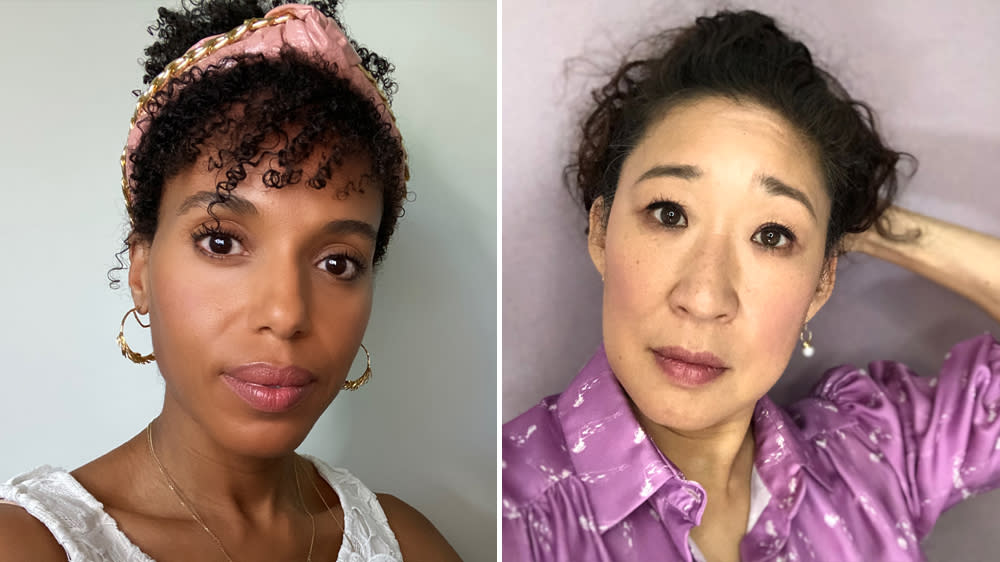 Sandra Oh and Kerry Washington rose to the pinnacle of stardom on television shows created by Shonda Rhimes. After 10 seasons as Dr. Cristina Yang in “Grey’s Anatomy”, Oh embarked on a spying adventure as a spy dodging a ruthless killer in “Killing Eve”, which recently ended its third season. Washington, who played Olivia Pope for seven seasons in “Scandal,” now plays artist Mia alongside Reese Witherspoon in “Little Fires Everywhere.” In addition to acting, both have assumed the duties of producing. They talked to each other via video chat to VarietyActors in the theme Actors.

Sandra Oh: I want to get through this screen and touch you. I’m going to start by asking a question about “Little Fires Everywhere” which I loved. I’m so glad that you and Reese did it. Can you tell me a little bit, I’m interested to know, about the details of the process of how you and Reese got together?

Kerry Washington: Reese read Celeste Ng’s beautiful novel. We have been casual friends for a long time. So she e-mailed me and said, “I found the thing for us.” When I read it, I loved the material, and I loved the in-depth exploration of the many paths to motherhood. I think we tend to think of a duality of good mothers and bad mothers, and we ignore the beautiful spectrum of the ways we are mothers. All of that was too ripe for exploration.

Oh: I really loved how no one shunned, I felt, the potential judgment of what it would be like to make the wrong choice, to be a bad mother. Because in the complexity of motherhood, it’s like, sorry, people make their calls based on where they are, what they have access to.

Washington: When I hear you describe it, it reminds me a lot of your extraordinary work on “Killing Eve”. You were so willing that she did it wrong, was messy, and was on the absolutely wrong side of the trial in her marriage, with her colleagues, with Villanelle. At the beginning of the journey of taking on this role, how much of your bow did you know beforehand?

Oh: I got the pilot that Phoebe Waller-Bridge wrote, but I felt like I could see a lot based on that pilot. Particularly Eva’s interesting nature and the energy between her relationship with Villanelle.

Washington: Did you have any idea that you would become these queer icons?

Oh: Not at all. We were very isolated, isolated in our bubble, when we did this. We filmed this in the summer and winter of ’17. That fall was also #MeToo and Time’s Up. It was fascinating to be in the UK, because I could feel, hear and read what was happening at home, but it was not the same in the UK. But what I felt was: “People are ready for something new, and here it is.”

Washington: I’ve never seen you work this out physically, with all the stunts, and I wonder if that was different for you, using your body like that.

Oh: I have to tell you: even more than that, I think being the only American on that set, in Europe, informed me more than physicality. I haven’t even really talked about this, but there is something about constantly feeling like the watcher or the stranger. I feel like Eve talks a little differently than I do. I feel like he’s the American who’s been established in the UK for 15 years. Many of my friends, mostly Canadian, who have settled there for 20 years, actually have a strange Scottish accent.

Washington: How was that in relation to being the only Asian woman on set?

Oh: Well, that’s what I’m totally used to. Being the only Asian person is a very familiar place to me. What was your relationship with the writers’ room?

Oh: How many dashes did you have before you started shooting?

Washington: I don’t know exactly, but they were all rewritten throughout the process. But it was not like in “Scandal”, when they are weekly scripts. Network television is different. They barely keep up. We would always rejoice in the “Scandal” when you get a rewrite, because you know it would be better, but it was also like, “Do I have four hours to memorize a three-page monologue? Cold.”

Oh: I spent a lot of time with writers, and television is about your relationship with the writer. What I could get from “Grey’s” is having the responsibility and the relationship with the writer to be able to direct where he is going. If something like, “That is completely wrong” came up, I would go toe to toe with Shonda and many of the writers, which has been a challenge. But I think ultimately for the whole product and our relationship, if you’re fighting for the show, if you’re fighting for your character, people can say that.

Washington: In the books, is Eva Asian American?

Oh: It is based on a pair of Luke Jennings novels called “Villanelle codename”. I don’t remember him really describing Eve and her race, but I could tell that, for me, my perception was, my projection was, that she was white.

Washington: I’ve noticed, at the top of season 3, the scene at the grocery store and all the Korean packaging, the Korean cash register. There is much more, it seemed to me, overlapping the Asian identity than in Season 1.

Oh: Absolutely, and that’s a slow process I’ve been in all my life: how to carry the Asian-American identity. Most of the programs I’ve done have not been specific to Asia on purpose. When we did “Grey’s”, at least for the first 10 seasons, we didn’t talk about race. We weren’t going to the race, and that had a purpose. And, whatever it was, it was the right thing to do when it was. In season 3, Burke and Cristina were getting married and there were the two mothers, the Asian mother and the black mother, and I say: “Come on, there are many stories we can do here!” But they didn’t want to touch it, for whatever reason. Now my interest is much more in bringing that story.

So even at the beginning of Season 3 for “Killing Eve”, I had released Suzanne Heathcote, our showrunner. I thought, “Listen, I see Eve on a moped in Cambodia.” It was very important for her to feel anonymous.

Oh: Can you talk a little about your experience at “Scandal”? Can you talk about the pieces you feel are now in your elbow, knee, and hips?

Washington: On the one hand, when you do so many television seasons, I don’t feel like there’s something I haven’t been asked to do. It’s just a character gym, where you just need, week after week, to be in these intense experiences of the most important moments in a person’s life, so that requires an almost level of athletics.

Washington: Yes. So is. And also, I will also say a physical one, working 16 hours a day. I would notice if I wasn’t hydrated, if I wasn’t getting enough sleep. I remember when I was pregnant, it took me twice as long to memorize. In fact, I remember being with you at a Producers Guild Award event, and the two of us were perhaps introducing Shonda. We were at a table together, and you were filming the next morning, and you had the pages of your scene at dinner because you were memorizing and working on your lines. And I was like, “She’s my people. That’s me!” I attend all the awards with a monologue in my portfolio because I didn’t have time not to. I did not have the luxury of not working.

I felt that I was also very protective of Olivia Pope, and that I was devoted. Maybe that’s the right word: I was so dedicated to it. I have to say that I was inspired by performances like yours. You showed me the kind of honesty and depth that was possible. And sometimes it meant that I would go to the writers and ask for changes, but I think I also learned how to try to be a real partner. I wanted to be a partner with Shonda, so I learned to lead with good.

Oh: That is very good. I don’t think I have a great face for …

Washington: It’s true. You are an accountant of truth, which is a beautiful thing.

Oh: When I look back, I feel that since it’s been six years since I left “Grey’s,” I feel that one of my greatest successes, for me, is that I don’t feel like I’ve given up. We did 22 episodes, but in the first years, there were 24. It was crazy. Then you have to choose the times when you can leave the accelerator pedal, because it is heavy work. There would be scenes I would go to, I don’t know, 10 rounds and I know it was difficult. And I really respect all the writers who accompanied me.

Washington: What does that mean, would you go 10 rounds?

Oh: You have to do different levels with the writer, and then you upload it and eventually you get to [Shonda]. You have to disturb her. When it looked like a dead end, we were both digging our heels enormously. But only by friction itself, many times a third thing would come out, and it would not be in sight of my conscience; it would take that push against someone equally strong. I started to learn to trust that. And also, that gold is in resistance.

Washington: Tell me more about it.

Washington: I would also find it with the directors. Because it’s difficult, sometimes on television, you have new directors all the time. Even in “Little Fires”, we had our dear dear Lynn Shelton, who just passed away, who was our true captain in terms of direction, but we had two other wonderful directors. But that change in directing authority can be challenging as an actor when you’ve played this character for years.

Oh: I’m going to move on to something I heard you say, where there are almost those moments when you have given up the transformation, and then made the decision to appear on television. Can you talk a little about that?

Washington: Yes. It’s funny, because I remember “Sideways” and “Ray” came out in the same year. I remember seeing “Sideways” and being so impressed by you. To be honest, I did not like anything I was reading in the world of cinema. I was not inspired by the business, by the answers to my work, by the opportunities. When I read the script for “Scandal” that had a black woman at the center of a story and was a complicated antihero, in many ways aspirational and in others very flawed, it seemed like a miracle. It felt like I was holding a miracle in my hands, reading that script.

Oh: I have to tell you that I remember exactly where I was when I read that damn pilot.

Oh: Oh yeah. It was in “Grey’s”. We were on stage five. Someone took it from me, I don’t know who it was, but I had that pilot in my hands and I read it and thought: “How could I play Olivia Pope?”

Oh: I remember going to Shonda, and it’s like, “How could I do this? What is this script? Could I do this too? She says,” No, you have to play Cristina Yang! “

Washington: “You have a job, girl.”

Oh: But I also feel that it is so wonderful and rare when you have something in your hands that you know is electric, that you can feel.