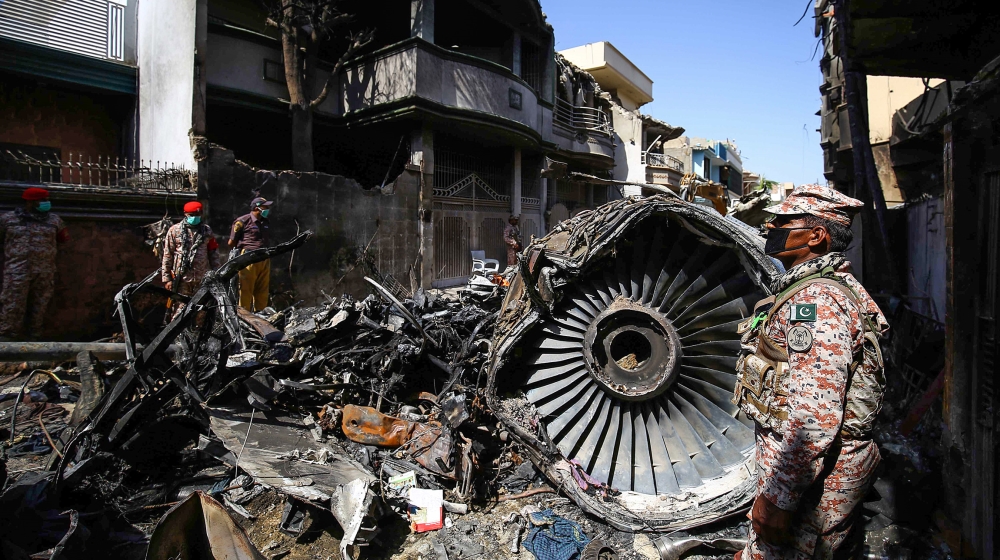 Islamabad, Pakistan – A commercial plane crash that killed 98 people in the southern Pakistani city of Karachi last month was mainly due to human error, according to an interim investigation report on the disaster.

Pakistan’s aviation minister read parts of the report and presented it to Parliament in the capital Islamabad on Wednesday.

“According to the initial investigation report, the pilot and the [air traffic] the controller did not adopt the proper procedure, “said Ghulam Sarwar Khan.

The initial report was based on data from the digital flight data recorder and the aircraft’s cockpit voice recorder, decoded by investigators in France earlier this month, days after the May 22 accident.

The accuracy of the report has been questioned by the country’s main pilot body, the Pakistan Airline Pilots Association (PALPA), according to a spokesperson.

Khan said the plane had approached the runway at an unsafe approach angle after ignoring air traffic control warnings to lower its altitude while still 10 nautical miles (18.5 km) from the runway.

The pilot deployed his landing gear at that point, but flight data shows that the team again retracted five nautical miles (9.3 km) from the runway.

The plane scraped the ground on its aborted landing, engines hitting the runway at least three times, initial reports indicated.

The pilots then attempted to turn around for another landing, but the plane was unable to gain altitude as its engines failed, causing it to fall to the ground in the Model Colony residential neighborhood.

Ninety-seven of the 99 people aboard the plane died, only two passengers survived after they were thrown from the wreckage on the first impact.

A boy, who was in one of the 29 houses destroyed by the plane, died on the ground from the plane’s impact.

Khan said the initial investigation had ruled out any technical flaws in the plane.

“Based on this preliminary report, this […] “The plane was 100 percent fit to fly,” he said. “There was no technical failure of any kind.”

PALPA responded to the report by questioning its findings, questioning its accuracy when none of the four members of the Pakistan Air Accident Investigation Board was a pilot qualified to fly the Airbus A320 plane, the model of the crashed plane.

“We have no idea about it, we have not even seen the report,” PALPA spokesman Qasim Qadir told Al Jazeera.

“We have not been included in this, even as silent observers,” Qadir said. “None [the investigators] are classified in this plane or know this plane “.

Speaking to Parliament, Aviation Minister Khan said Pakistan’s plane crash investigators had been assisted by an international team of 10 people, including members from France and the United States.

He said a “senior Turkish pilot” had been listed as a technical adviser.

“There is a free, fair and transparent investigation underway, and this is his preliminary report,” he said.

The International Federation of Airline Pilot Associations, which offered its technical assistance to the Pakistan investigation in a letter on May 24, did not immediately respond to a request for comment on the initial report.

According to Khan, “the pilot and co-pilot were not focused” and had been discussing the coronavirus pandemic when air traffic control first alerted them to its excessive altitude.

“[The pilot] he listened quickly and replied that he would succeed. And then he talked about the crown again, “said Khan.

“Unfortunately, there was overconfidence and that focus and concentration were not there.”

Khan also said that air traffic controllers were also to blame during the failed initial landing.

“The controller is also negligent that when he saw the plane touch its engines and saw fire coming out of the engines, he should have reported [the pilot]”said Khan.” But the control tower did not inform the pilot. “