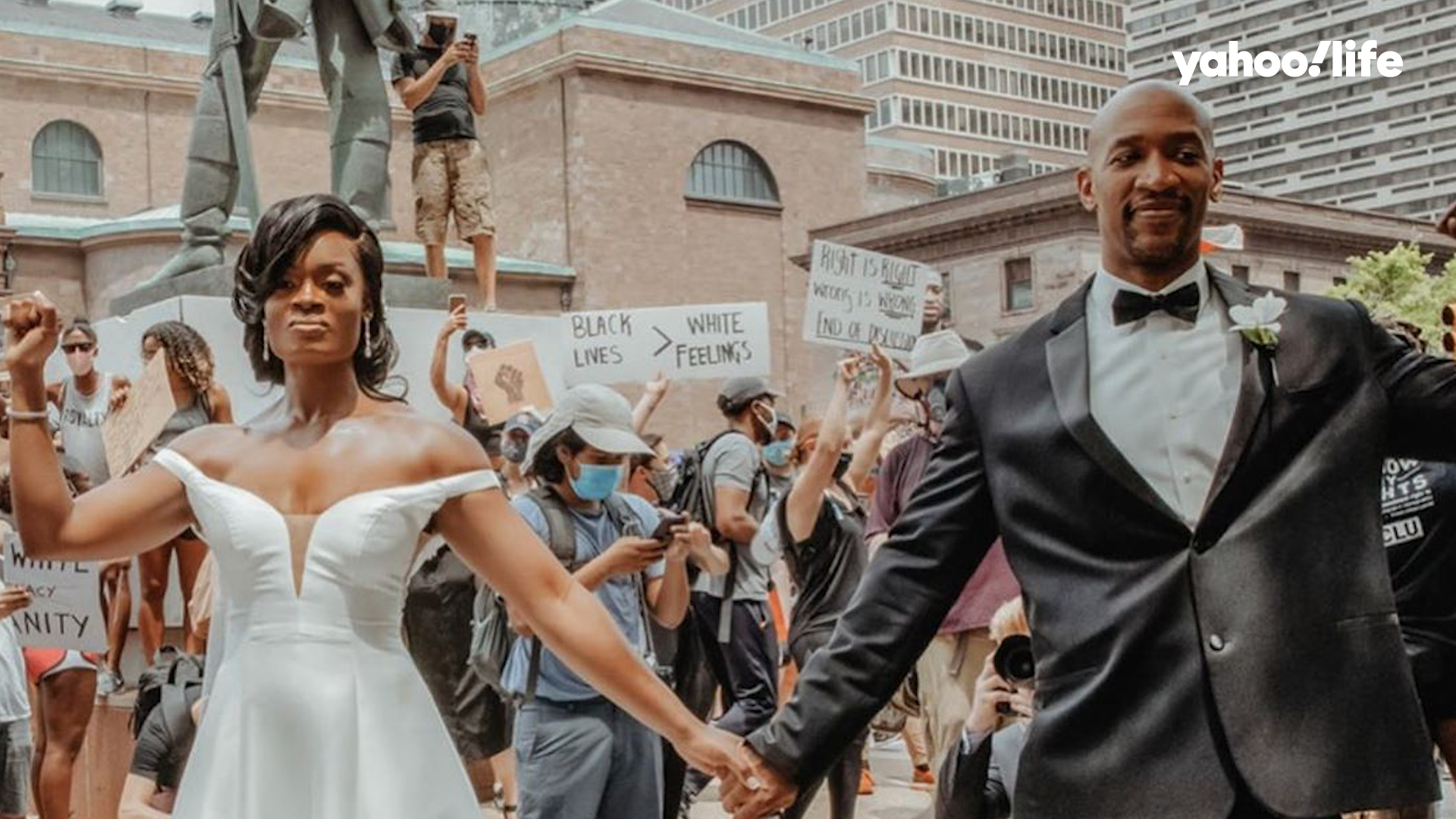 The newlyweds Dr. Kerry Anne Gordon, 35, and Michael Gordon, 42, shared their “first glimpse” on their wedding day with dozens of people who demonstrated during a Black Lives Matter protest in Philadelphia.

The couple experienced something that will always be part of their lives and part of history. The Gordons first look photos and video went viral, making the newlyweds a symbol of black love and hope amid the national turmoil sparked by the murder of George Floyd in Minneapolis, Minnesota.

The couple would marry on May 26, 2020. They had engraved rings and had decided all the details ahead of schedule, even the printed candies with their wedding date. Then the coronavirus outbreak forced them to postpone their wedding plans.

Due to the pandemic, the couple decided to delay their celebration for one year; however, they still wanted to be able to celebrate in the summer of 2020. They later learned that Logan, a boutique hotel in Philadelphia, was donating space to couples whose wedding plans had been affected by the pandemic.

The Gordons made plans to hold a “micro” ceremony on June 6 at Logan. Then on May 25, the murder of George Floyd plunged the nation into turmoil. Across the world, hundreds of thousands of people took to the streets to protest police brutality and racism in a movement that has continued to grow every day since the death of George Floyd at the hands of the police.

The hotel informed the Gordons that a peaceful Black Lives Matter protest was to be held in front of the hotel on their wedding day. While the couple was concerned about their relatives’ ability to get to the hotel, they were determined to get married, no matter what.

The Gordons had already planned to take their first look outside the hotel. When Kerry Anne went out to meet Michael the first time that day, she was initially alone, waiting for her bouquet and away from the protesters. When Michael approached her, the protesters had approached. Finally, they moved around her and cheered and applauded her.

Michael said he heard the sounds of applause and cheers and wanted to know what was going on.

“I still hadn’t seen her that day. And just start hearing applause and cheers. Something is happening. There are thousands of people going down the avenue. I only hear it around the corner. And of course I’m curious. I just want to know what the hell is going on, but I couldn’t go because Kerry [Anne] it was there and I still couldn’t see it. “he says.

“While I’m experiencing this and the energy, the first thing I can think of is that I need Mike to feel what I feel. The love was so strong that she didn’t want to be selfish about it. And so I yell at him to catch Mike, ”says Kerry Anne.

Kerry Anne knew that her intimate moment with Michael was about to become much more public and, although unexpected, much more special.

“I was excited about our future together and the fact that we are getting married, but then I’m thinking about the crowd, the energies, the people, the movement, our history. Everything became so overwhelming in my soul. It was like a moment of liberation ”, he explains.

Protesters surrounded them, cheering and applauding as they photographed them.

“Everyone knows what love is. Lots of hope in people’s hearts. And I think that was what people were seeing at the time when we shared our first looks, ”says Kerry Anne.

Gordon Reverend Roxanne Birchfield, who is Reverend Roxy, amplified the moment by posting photos of the event to Instagram.

“They are the perfect match for this to have happened to them. … Knowing their background, and even remembering some of the conversations between them, where I remember Michael saying, ‘I feel like our wedding is out of control. It’s going to be exaggerated, like exaggerated. ‘” Birchfield tells Yahoo Life. “And little did they know. Even with COVID, it’s like it’s still the way Kerry Anne probably was, yeah, that’s great. “

The Rev. Roxy, who served as a chaplain in the Army Reserve and at various hospitals, was proud of the couple’s unintended and unintended involvement with the movement on their wedding day.

Although they did not plan this, “they were very prepared and excited to be part of the protest,” she says.

Due to their demanding work schedules and the additional emotional and organizational burdens of re-planning their wedding during a pandemic, the couple had yet to join a protest.

“I am so happy because I wanted to be part of the protest,” says Kerry Anne.

Reverend Roxy was so moved by the experience that she commissioned a painting that replicated one of the photos from the first glimpse of the Gordon of Paintru, a company that turns the photos into hand-painted works of art. She presents it to the couple as a wedding gift to help them commemorate this moment of empowerment that happened on their special day.

Kerry Anne and Michael are proud of their involvement in the Black Lives Matter movement and hope that their special day will add an extra layer of meaning to the June 6 protest in Philadelphia, sharing a moment in history for years to come.

“Our love that we had, their love that day, it all came together,” says Michael.

For him coronavirus latest news and updates, follow along https://news.yahoo.com/coronavirus. According to experts, people over 60 and immunocompromised people continue to be the most exposed. For questions, see the Centers for Disease Control and Prevention‘s and From the WHO resource guides.

Do you want to receive daily news about lifestyle and wellness in your inbox? sign up here for the Yahoo Life newsletter.