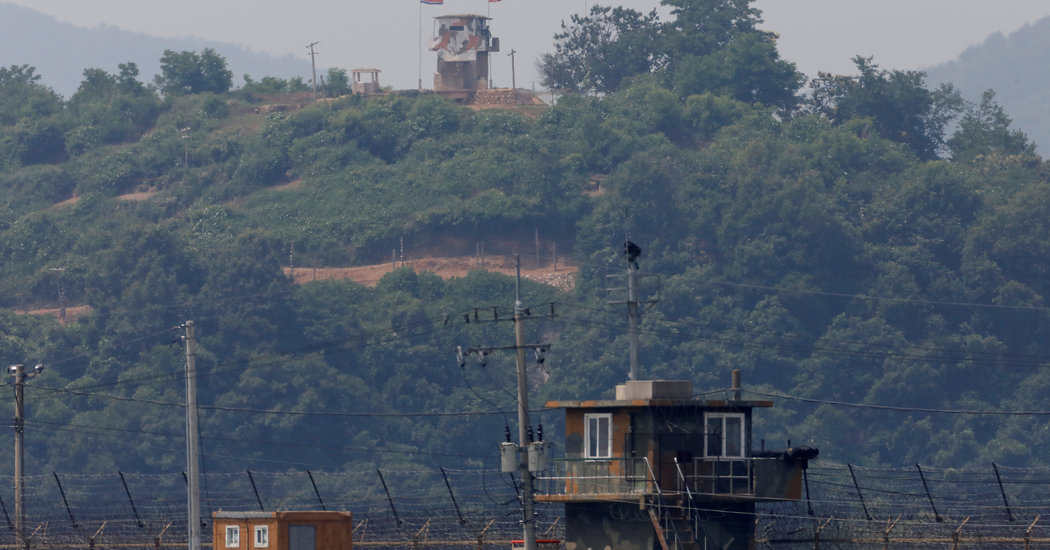 Shifting back and forth between increasing and decreasing tensions has long been part of the way the North gains diplomatic influence against its external enemies.

The decision came after a series of actions by North Korea earlier this month that threatened a fragile détente on the peninsula, such as cutting lines of communication with the South and blowing up a joint inter-Korean liaison office. The Northern army had also drawn up “action plans” that were likely to increase tensions along the border and had requested their approval by Mr. Kim.

Mr. Kim’s move is likely to put at least a temporary brake on what appears to be a rapid escalation of tensions on the peninsula in recent weeks. By staying in Pyongyang as a heavy hand, the leader of the North seemed to have left room for diplomatic negotiations.

It acted after convening on Tuesday the Central Military Commission of the Workers’ Party, the highest decision-making body on military affairs, and “took stock of the current situation and suspended plans for military action against the South.” the North Korean Central News Agency said.

The news agency did not offer details on Mr. Kim’s decision, but added that the meeting, which took place via videoconference, studied “some documents that carry state measures to further strengthen the country’s war deterrence”, an apparent reference to North’s earlier threat to increase his nuclear weapons capabilities.

North Korea has been expressing increasing frustration with South Korea and the United States, especially since the second summit between Kim and President Trump collapsed in Vietnam in February last year.

This month, he took advantage of anti-Kim leaflets sent out by activists in South Korea, mostly defectors from North Korea, to begin reversing the détente created when Kim met with President Moon Jae-in of South Korea in 2018. .

Last week, the North Korean People’s Army said it had prepared plans that would undermine the Kim-Moon deal. His plans included the reconstruction of some military guard posts within the Demilitarized zone between the two Koreas that were demolished under the Kim-Moon agreement and resuming “all kinds of regular military exercises in areas near the border.”

On Monday, the North said it had prepared 12 million anti-South Korean leaflets and 3,000 balloons to transport them across the border, along with cigarette butts and other trash.

Most of the threats were not made on behalf of Mr. Kim, but were orchestrated by his only sister, Kim Yo-jong, whose influence on his brother’s government has expanded in recent years. Analysts have said that by putting his sister at the forefront of North Korea’s growing confrontation with Seoul and Washington and by staying away from the fray, Kim has maintained diplomatic flexibility to reduce the escalation.

The sudden turn of the North towards animosity with the South, and, by extension, with the United States, reflected a desire to unify the country in the face of an economy further affected by the coronavirus pandemic and an increasing need to press for concessions in international sanctions. analysts said.

South Korea also moved quickly this month to placate the North, vowing to use the police to stop any efforts by activists to send propaganda balloons to the North. The South said the brochures did little more than provoke the North and create trash in the South because many of the balloons never cross the border. Seoul is also pressing to review national laws to ban the sending of such brochures.

At the same time, South Korea expressed its strong displeasure at the insults the North launched against its leader, Mr. Moon, and threatened retaliation if the North Korean army increased tensions. Ms. Kim at one point called Mr. Moon “crazy” and her speeches calling for peace on the peninsula “disgusting”.

The harsh rhetoric was a change from the warm relations between Kim and Moon that peaked in September 2018, when Kim allowed Moon to speak to a large North Korean audience that filled a stadium in Pyongyang and the two leaders climbed Mount Paekdu, raising their hands together on the top of the volcanic mountain on the Chinese border that Koreans consider the sacred birthplace of their nation.

Moon, an advocate of political reconciliation between the two Koreas, helped organize Kim’s historic summits with Trump, elevating Kim’s global status. But North Korea has repeatedly criticized both Seoul and Washington after Trump and Kim’s diplomacy failed to ease U.S.-led sanctions. So far, Kim himself has not heavily attacked Mr. Trump and Mr. Moon in person.