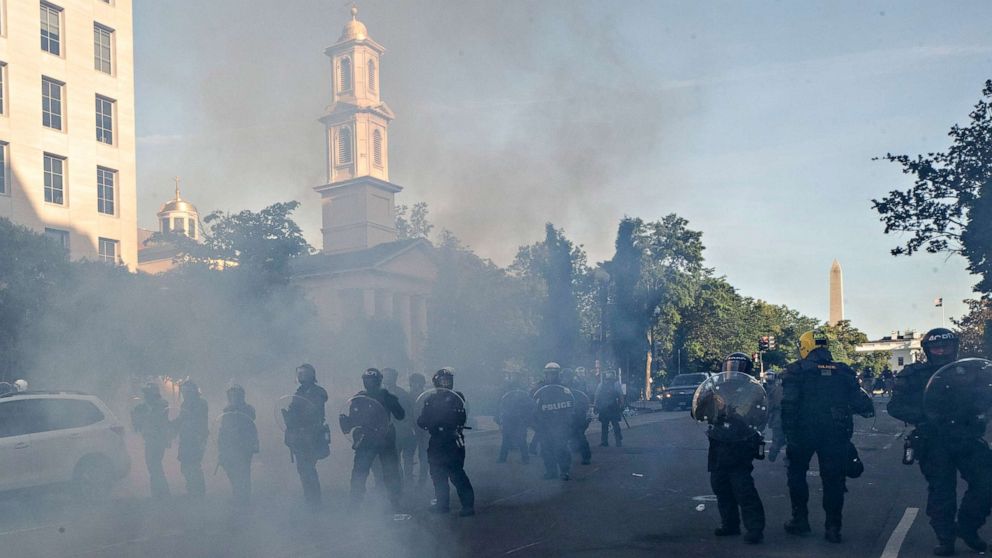 The officer says the “excessive” force was directed at peaceful protesters.

A National Guard officer will appear before Congress Tuesday to challenge the history of the Trump administration behind the decision to force protesters out of a park near the White House last month.

Adam DeMarco, Iraq war veteran and commander of the DC National Guard, was responsible for coordinating guard support for the US Park Police during a June 1 protest against police brutality in the Park. Lafayette.

In testimony presented to Congress before the hearing, DeMarco described the protesters as largely peaceful and said they faced “excessive use of force” at the hands of the federal police that the guards were tasked with supporting.

“Having served in a combat zone and understanding how to assess threat environments, at no time did I feel threatened by protesters or assessed them as violent,” DeMarco wrote in testimony before the House’s Natural Resources Committee, which conducts the supervision of the National Park Service and the Park Police.

DeMarco said he could barely hear the warnings for people to leave the park from their position north of the White House, and said there was “no indication” that protesters knew they had to leave.

Attorney General William Barr orchestrated the cleanup of the park just before President Donald Trump walked through the area to take a photo at a nearby church, as ABC News previously reported. Barr later said that expanding the security perimeter was already planned when he discovered that the President intended to walk.

The administration has denied that tear gas was used on the protesters. But DeMarco directly refuted the claim in his prepared testimony released Monday, saying the irritation in his eyes and nose reminded him of the gas the army trained to detect. He later found spent tear gas cans on the street near the park.

“Committee members, the events I witnessed in Lafayette Square on the afternoon of June 1 were deeply disturbing to me and to my fellow National Guard officers,” said DeMarco.

The acting head of the United States Park Police, Gregory Monahan, is expected to defend the federal police response to the committee on Tuesday. While not mentioning a specific case of aggression by protesters immediately before the move to clean up the park, Monahan said acts of violence in the days leading up to June 1 prompted the decision.

“Overall, the Park Police of the United States acted with great restraint in the face of severe violence from a large group of bad actors that caused 50 of my officers to seek medical attention,” Monahan wrote.

Monahan has argued that cleaning up the park at the time was necessary to establish a security barricade around the White House and that the movement of protesters out of the park was done “once the fence came.” The claim also appears to contradict DeMarco’s testimony.

The DC guard said that the materials to install the fence did not arrive until 9 p.m. that night, more than two hours after the protesters were forced to leave.

Both DeMarco and Monahan face questions before a panel of House lawmakers on Tuesday. Attorney General Barr will also testify at a separate hearing focused on his intervention in high-profile criminal cases involving Trump’s political allies.

His appearances before Congress follow months of protests across the country aimed at drawing attention to systemic racism in law enforcement. While the protests have been largely peaceful, some have erupted with violence.

Democrats and civil liberties advocates blame the administration for the intensification of confrontations between police and protesters in recent months. Trump has threatened to deploy additional forces to attack crime and protect federal property.

Clashes between protesters and federal police in Portland, Oregon, sparked a week-long dispute between the administration and local officials with the City Council that took action earlier this month to prevent cooperation between local police and the federal agents.