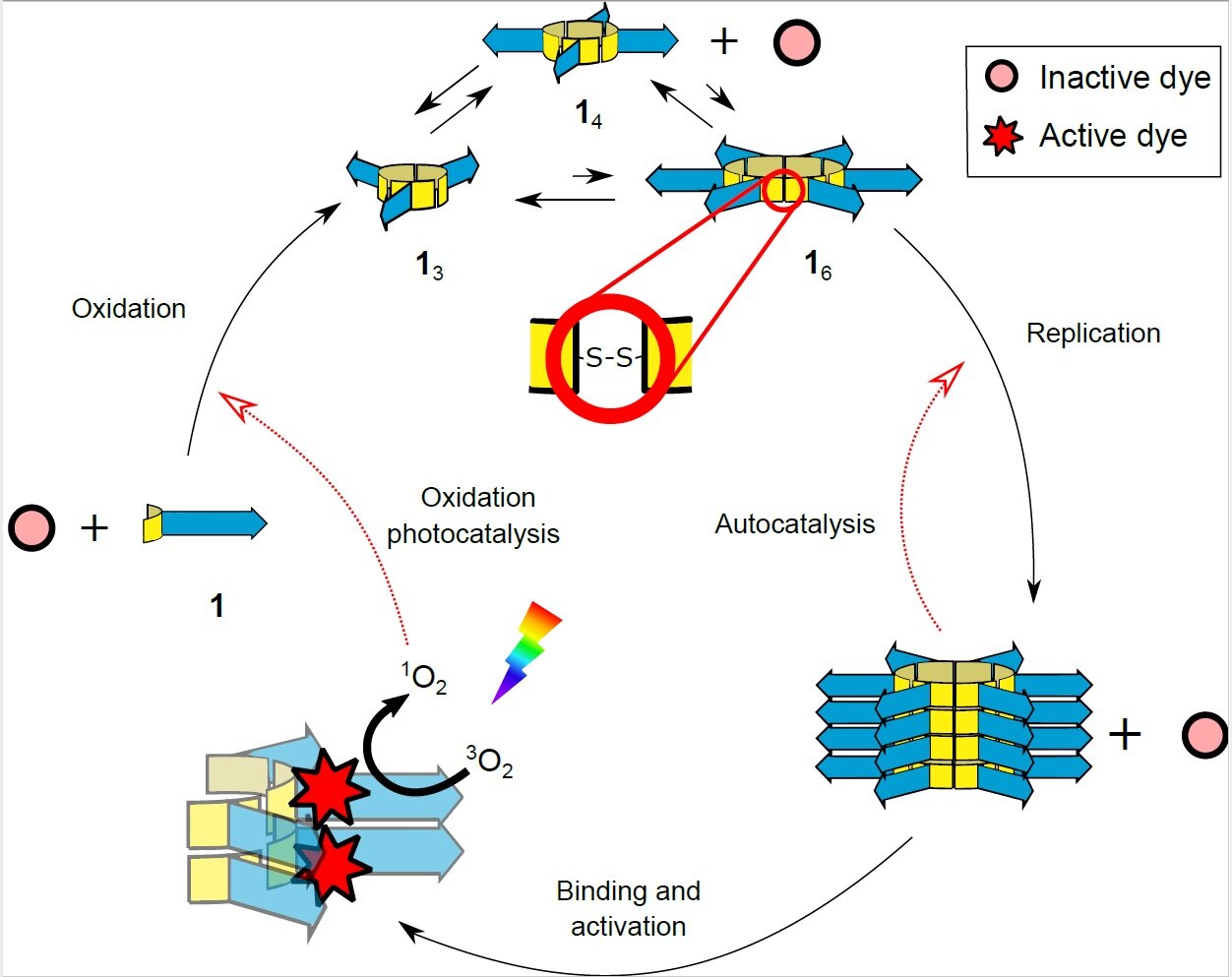 In a system with self-replicating molecules, previously shown to have the ability to grow, divide, and evolve, chemists at the University of Groningen have now discovered catalytic capabilities that result in basic metabolism. Additionally, they linked a light-sensitive dye to the molecules, allowing them to use the energy of light to drive growth. These findings, which take artificial life one step further, were published simultaneously in the magazines. Chemistry of nature and Catalysis of nature The 26th of June.

Ten years ago, Sijbren Otto, professor of Systems Chemistry at the Stratingh Institute of Chemistry at the University of Groningen, discovered a new mechanism for self-replication: small molecules containing ring-shaped peptides in solution that later form stacks of increase. When a pile breaks, both halves begin to grow again. Furthermore, the growth of the piles depletes the number of rings in solution and this, in turn, stimulates the formation of new rings from the building blocks. The system could also ‘mutate’ when different building blocks were added.

This system, which arose spontaneously, is a form of artificial proto-life. “The definition of life is complex, but in general life must have three basic properties,” explains Otto. “The first is replication, and this happens in our system. The second is metabolism, which should create building blocks of materials in the environment. And the third is compartmentalization, which separates the living organism from its environment.” Finally, such organisms should develop a fourth, more advanced property, which is the ability to evolve and invent.

Otto and his team set out to make changes to their molecules to add catalytic capabilities. “However, when we started the project, we made a surprising discovery. Without requiring any changes, the system was already showing catalysis; we just hadn’t noticed it before.” Stacks grow from rings made of six building blocks. These rings are formed by combining the smaller ring building blocks that are made up of three or four building blocks.

“It turned out that the ring piles catalyze the formation of the smaller rings,” says Otto. Further analysis showed that the catalysis of this reaction requires the presence of two specific amino acid residues (two lysine residues). “Neither the building blocks nor the separate rings have catalytic capabilities, but the cells do. So we assume that in these cells, a three-dimensional configuration of these lysine residues arises that acts as the catalytic center, just as proteins form active sites by placing amino acid residues in highly specific arrangements, “explains Otto. Therefore, in the structures that emerge as a result of their capacity for self-replication, amino acids are organized in such a way that they can act as catalysts.

Cells are also capable of catalyzing retroaldol, a well-known reaction that is often used to compare the design efforts of the catalyst. “Interestingly, our batteries, which were not designed to have catalytic capabilities, were as efficient as the best-designed catalysts we know of.” It is interesting to discover that the same stacks can catalyze two very different reactions. Many enzymes have this ability, which gives evolution a chance to develop something new.

In a second study, a photosensitive dye was added. “Guille Monreal, one of my PhD students, read that such a dye could stimulate the formation of reactive singlet oxygen in amyloid peptides. As reactive oxygen drives important steps in ring formation, I wanted to see if this would speed up the process. ring formation. ” Two different dyes were found that actually accelerate the formation of rings when exposed to light, but only when attached to batteries. “The dyes seemed to act as cofactors for the stacks, just as modern proteins use cofactors for their catalysis,” says Otto. When attached to the replicating fibers, the dye can use light energy to create singlet reactive oxygen, thereby increasing the formation of new rings.

However, Otto’s artificial system shows both replication and a primitive form of metabolism. “Furthermore, from this point, compartmentalization is a relatively small step.” So are you close to seeing artificial life evolve in your test tubes? “Not entirely,” admits Otto. “That would require the system to be capable of open evolution, which means it can develop capabilities that are not present in the system. And we still don’t have a clear idea of ​​how to achieve that. But our system seems to be a base sound from the which one can we get. ”

The origins of abiotic species.

Provided by the University of Groningen