Mask mandate catches up with visitors to the Las Vegas Strip 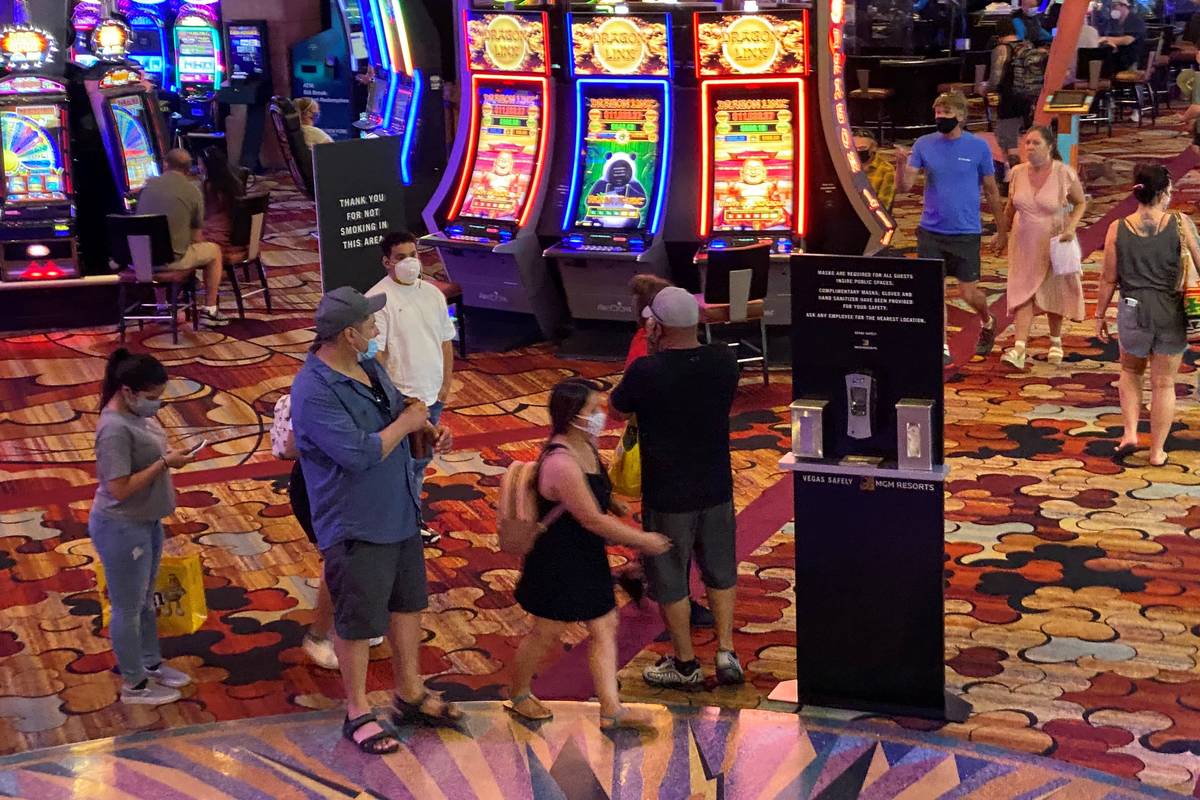 Nevada’s new mandatory mask policy seemed to be quickly understood on Saturday by those visiting the Las Vegas Strip.

Clients from Cosmopolitan, MGM Grand, Bellagio, and New York-New York seemed to receive the message from the state, various casino entities, the Las Vegas Convention and Visitors Authority, and others across the valley.

All three casinos had signs in and around the gaming floor and in parking lots, and played messages on speakers announcing the state mask requirement that went into effect on Friday.

Miguel Ruiz, from Santa Barbara, California, noted the effectiveness of the security message being sent to the area.

“Vegas is doing a good job,” said Ruiz, who was in Las Vegas with his family. “Almost everyone has a mask, there are disinfection stations and other things like that. I feel safe. “

All of the Ruiz family members wore masks as they walked outside in front of the Showcase Mall next to the MGM Grand, and most of the crowd chose not to wear them once they left a casino or business.

Jason and Tiffany Bennett from Eugene, Oregon, said they question the effectiveness of wearing a mask, but were happy to use one to make others around them feel more comfortable.

“I am grateful that you are (Las Vegas) open again and if you say put on a mask and you can come in and enjoy it, I will gladly do so,” said Jason Bennett. “If it makes you feel better that I have a mask on, I will. It doesn’t hurt my feelings at all. ”

Tiffany Bennett said the masks can be a little awkward at times, especially in the heat, and can be seen on the casino floor. Some guests improperly use face covers, hanging them to one side of the ear or hanging under the chin, revealing their nose and mouth.

“So while technically everyone is wearing a mask, they are not doing it correctly,” said Tiffany Bennett. “So it seems like a moot point.”

The couple has been to Las Vegas several times in the past and the fact of having to cover their faces didn’t really take away from the fun of their visit. One thing she did is that some of the off-game features that Las Vegas is known for, such as buffets and shows, were not an option for this trip.

“It is a bummer that a lot of things close,” said Tiffany Bennett. “The shows and things like that, because we are used to having that experience too. But it is what it is.”

At the Bellagio on Saturday, most patrons followed the mandate to wear masks in public, although some wore them incorrectly.

The conservatory was packed with people in masks waiting in line to walk through the flower show. Although most wore masks, the crowd seemed to ignore the social distancing markers placed on the ground to separate people in line.

At the casino, almost everyone wore masks in the early afternoon, but many had theirs around their chins or hung from one ear while talking to a partner or having a drink.

Shortly after noon, a group of three who were not wearing masks walked through the casino to the guest elevators, passing several hotel employees on the way before one stopped them and asked them to put on masks.

As with other properties, masks and gloves were put on at multiple handwashing stations throughout the hotel, and guests who checked in had their temperatures taken.

The sound of slot machines playing on The Strat inspires Mary Labrado to wear her mask.

“I’m in favor as long as we come together as a community,” the 22-year-old East Las Vegas resident said Saturday night. “If we want Vegas to stay open, we have to wear our skins.”

Labrado said he saw staff wandering around enforcing the requirement, and the signage was evident.

Nearby, a man was asked to stay away from a roulette table when he took off his mask entirely for a beer.

Most visitors had no complaints about abiding by the new policy.

“We don’t like it, but we understand it,” said Alexandrea Shaw, a 34-year-old Maryland resident.

Next to her sat California resident Dustin Costanza.

“At least everyone we’ve seen has been using it,” said Costanza.