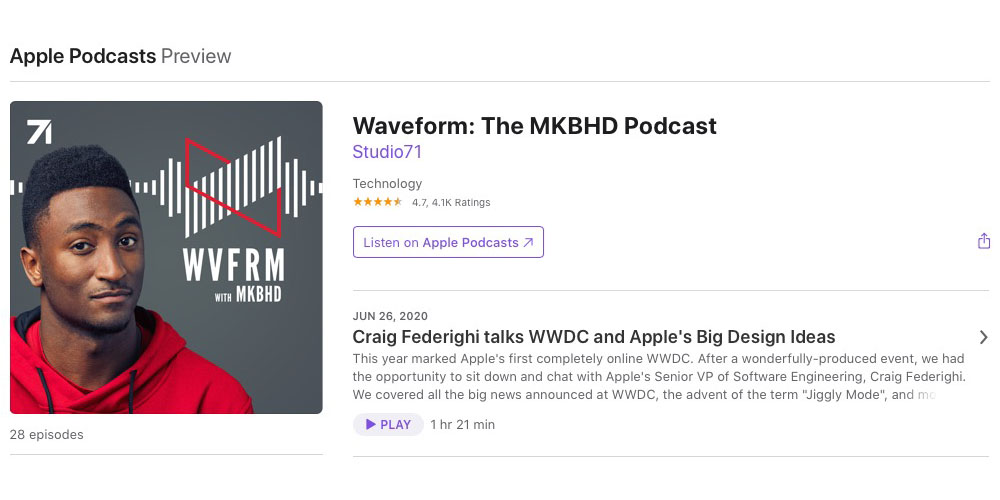 So far I’ve only had time to hear parts of it, but it’s definitely an interesting discussion. Brownlee begins by sharing my opinion that the prerecorded keynote format worked really well, and asking if this could be a permanent change …

Federighi was not attracted to the details of that, but said the company was very happy about that, and that he wanted to learn the lessons and then see what looks best for future keynotes.

Although he might have thought that the format would give Apple enough time to review everything, Federighi said he actually only saw the entire presentation for the first time on Monday.

Brownlee then asked what Apple saw as the key theme or philosophy behind iOS 14. Federighi said personalization and convenience are key.

The customization and convenience are huge. Having more information available at a glance is more convenient. It’s also very personal how you choose to configure that. Things like App Clips, where we imagine that you can move much more easily now, go around the world and discover things you can do with your phone, and take action super fast.

He also explained why Apple perhaps goes a little slow when it comes to allowing users to set their preferred default apps for different things. iOS 14 currently limits this to email and web apps, and Federighi hinted that this was because Apple wants to manually browse the apps listed.

Web and email apps need Apple approval to be able to set themselves as default apps: The company wanted to prevent abuse, like a random game that includes WebKit capabilities just because of the visibility it would get to see them in the scrolling list.

Brownlee raised one of my complaints about iPadOS 14: that widgets are limited to the sidebar, and therefore only the first screen. Federighi suggested that this could change over time.

Whether or not we want to move it forward over time, allowing you to move the widgets out of their designated place next to the app icons or not, we’ll see. But we felt we already had a great balanced solution for this.

Another common complaint has been the Siri visual interface. Federighi said Apple has codified two completely different approaches, one in which you can scroll behind Siri, another in which you cannot, and is open to receiving feedback on it.

We will continue to listen to what people have to say during the beta period, because as I say, we actually have it working both ways. But our feeling was that we wanted to achieve great lightness, not only visually, but also in terms of being able to dive into Siri, get a response, and move on.

A long-standing concern voiced by Mac enthusiasts is whether Apple is dulling the Mac and making macOS more like iOS. The macOS Big Sur design sounds the alarms for some, seemingly moving further in this direction, but Federighi said people should reserve their judgment until they have used it for some time.

First, I will say that we are all very connected to the Mac user interface. I mean, we use it all day. […] It’s a big part of the visual stage of our lives right now, so what seems right is partly what we’re used to seeing on that screen every day. When it changes, there are immediately all kinds of little pattern recognizers in our brains that say ‘Wait! Something is different. I feel like after using the user interface for … I’ve been living with it for months. It feels natural and fresh and clearly, clearly Mac, and I love it.

You can listen to Marques Brownlee’s podcast here, and Brownlee promises “a deep dive video” later in the day.