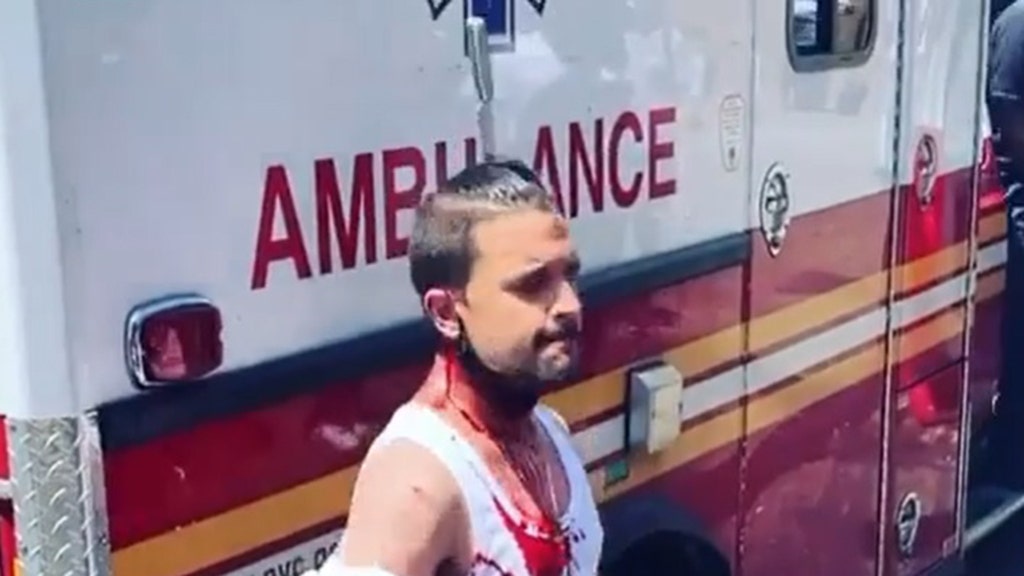 A Harlem man escaped a stabbing Tuesday with minor injuries, including one caused by the huge kitchen knife that fell from his scalp, authorities said.

The viral Instagram video of the bloody aftermath shows the unidentified man who appears to be speaking calmly to horrified viewers and walks to an FDNY ambulance, apparently unaware of his blood-soaked T-shirt and kitchen knife protruding from the top of his head.

“It looked like he wasn’t even sorry,” said a witness to the nightmare scene, which took place around noon on East 125th Street and Lexington Avenue in East Harlem, according to authorities.

“The guy refused to enter the ambulance,” the witness continued, and declined to be identified by name.

Added a security guard at a nearby Duane Reade pharmacy who witnessed the attack: “I am traumatized to see that.

“It looks like a scene from a damn movie.”

Despite the nature of the injury, police said the victim, identified only as a 36-year-old Harlem resident, escaped serious injury because the blade did not penetrate his skull.

He was listed in stable condition at Harlem Hospital.

Several witnesses characterized the events that preceded the stabbing as an apparent domestic dispute in which the man allegedly mistreated a female partner who responded by stabbing the knife into her head.

New York police, however, said the stabbing victim and a 34-year-old woman were on the same side of a dispute against another man, who cut the woman on the cheek before driving the knife into the man’s head and run away from the scene.

No arrests or charges were announced immediately.