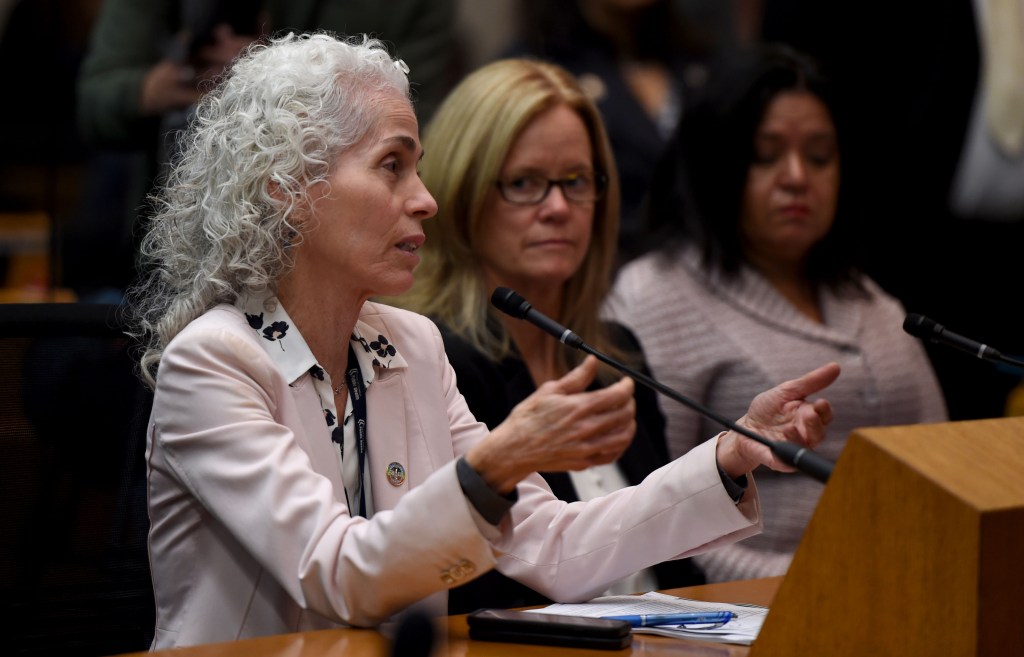 Los Angeles County Department of Public Health employees have received death threats since March as they remain the face of efforts to respond to the coronavirus pandemic, according to a written statement by public health director Barbara Ferrer on Monday, June 22 in the morning.

Threats of violence and death have come through emails, public publications and letters, according to the statement, released shortly before Ferrer provided an update on the coronavirus in Los Angeles County at an afternoon press conference. The disclosure came two weeks after her Orange County counterpart resigned amid threats of violence against her.

Ferrer did not provide details, either in her statement or during the briefing, about how many threats she and her staff have received. But she urged unity as the county progresses through the pandemic.

“We’d love for the discourse to change,” said Ferrer, “and let’s talk together about how we set our path on the recovery journey.”

The county has cautiously reopened the economy in recent weeks, recently allowing bars, nail salons, and tattoo parlors to resume operations on Friday, June 19, though officials have had to tread carefully, balancing the wishes of those who say they the reopening of the region has moved slowly and those who warn of the pandemic remain at risk.

Underscoring the current risk, Ferrer on Monday reported 18 additional coronavirus-related deaths and 2,571 new cases across the county. There were 3,137 total deaths associated with COVID-19, the disease caused by the coronavirus, and 85,942 cases as of Monday, she said.

So far, 97% of the deceased had underlying health problems.

Pasadena and Long Beach have their own health departments, so county data on those cities is often one day behind.

Long Beach reported Monday that there were no new coronavirus-related deaths, but 60 additional cases. The death toll in that city was 120 and its total number of cases was 3,042, as of Monday.

Pasadena had reported no additional deaths and cases until 3 pm Monday; but as of Sunday, her death toll was 88 and her total number of cases was 1,162.

Across the county, Ferrer noted, Monday was the third time in last week that health officials reported more than 2,000 cases in a single day, even as more and more businesses begin to open. While the reporting delays contributed in part to Monday’s high number of cases, the data shows the county is seeing an increase in community transmission, he said.

“Please make the spread of (COVID-19) one of the many things you do during the day,” said Ferrer. “What we really saw today, and I think what we’ve been seeing all along, is what I call a real increase that contributed to more community outreach.”

The most important metric to see now, Ferrer said, is how increases in cases translate into hospitalizations.

There were 1,453 people hospitalized with COVID-19 as of Monday, 28% of whom were in intensive care units and 19% of whom were on ventilators. While those numbers have held steady, Ferrer said, it’s a good time to remind ourselves if we isolate if we think we’ve been exposed to the virus, have had it, or are waiting for test results.

Dr. Chrisina Ghaly, director of county health services, added that even when orders to stay home are progressively loosened, people are still susceptible to contracting COVID-19, so their actions remain the bulwark against spread of the virus. The contraction of the virus depends on how close it was to an infected person, how long it was close to that individual and the nature of the interaction, he added.

Because people with mild or no symptoms can transmit the virus, Ghaly said, a test is only helpful if it is positive.

There are enough hospital beds and ventilators to meet the potential demand for hospitalization over the next four weeks, Ghaly said, but ICU beds are more limited because people with non-coronavirus-related illnesses and injuries are also on the rise.

“The number of beds (in the ICU) could become inadequate,” said Ghaly, “if the increase in transmission continues to grow.”

She urged those who have been in crowded spaces and who live with older people or with underlying conditions to stay away from those housemates, and to cover their faces when they are near them.

Meanwhile, Ferrer said that she and her team understand and appreciate people who express how they feel about the pandemic. But, she added, it becomes more difficult to work when people get mad at you and take county health reports in person.

“The virus has changed our world as we know it, and people are angry,” Ferrer said in the written statement Monday morning. “We regret every one of those deaths, and we are working tirelessly to curb the spread of COVID-19 and find good solutions for the future of our communities.

“While the devastation experienced by so many is heartbreaking,” she added, “it is also disheartening that an increasing number of public health officials across the country, including myself, are threatened with violence on a regular basis.”

Ferrer began receiving death threats last month during a COVID-19 live Facebook public briefing, when someone casually suggested that she be shot, she said.

“I didn’t see the message right away,” said Ferrer, “but my husband did, my children did, and my colleagues did, too.”

Ferrer leads the daily briefings, he added, to protect his team from attack.

“It is deeply troubling to imagine,” said Ferrer, “that our doctors, nurses, epidemiologists and environmental health specialists who are working hard on infectious diseases or any of the other members of our team would have to face this level of hatred.”

In Long Beach, city health officer Anissa Davis said Monday that she and her staff have received no death threats.

Meanwhile, Pasadena health officials have previously referred to the death and violence threats that their counterparts across the country have received by rejecting City Council criticism there. But it was unclear if Pasadena officials themselves had received threats, and a city spokesman could not confirm Monday afternoon.

Ferrer, for his part, acknowledged the frustration that many feel about the restrictions of staying at home, which has led to the loss of jobs and economic struggles. But he also made it clear that even though these rules are being relaxed and companies are reopening, the fight against the virus is far from over.

“Our job and our calling is to keep as many people as safe as possible during this pandemic,” said Ferrer. “We did not create this virus.

“While frustration overflows in our communities as people end this virus,” he added, “this virus does not end with us.”

The Department of Public Health, Ferrer said, “must follow the science,” which dictates the change.

“Science says that if we don’t change the way we do our daily routines,” said Ferrer, “we could pay for it with our lives or the lives of those around us.”

Ferrer compared the backward push that surrounds wearing face masks, one of several health guidelines, which also includes washing hands and keeping at least 6 feet away from others, when California made wearing seat belts mandatory.

“The data proves that seat belts save lives, and also shows that wearing a face shield will help stop the transmission of COVID-19, which will save lives,” said Ferrer. “That is what drives public health officials and it is our passion: saving lives.

“Change is difficult,” he added. “But we must change if we want to contain this virus.”

Sign up for The Localist, our daily email newsletter with carefully selected stories related to your place of residence. Subscribe here.