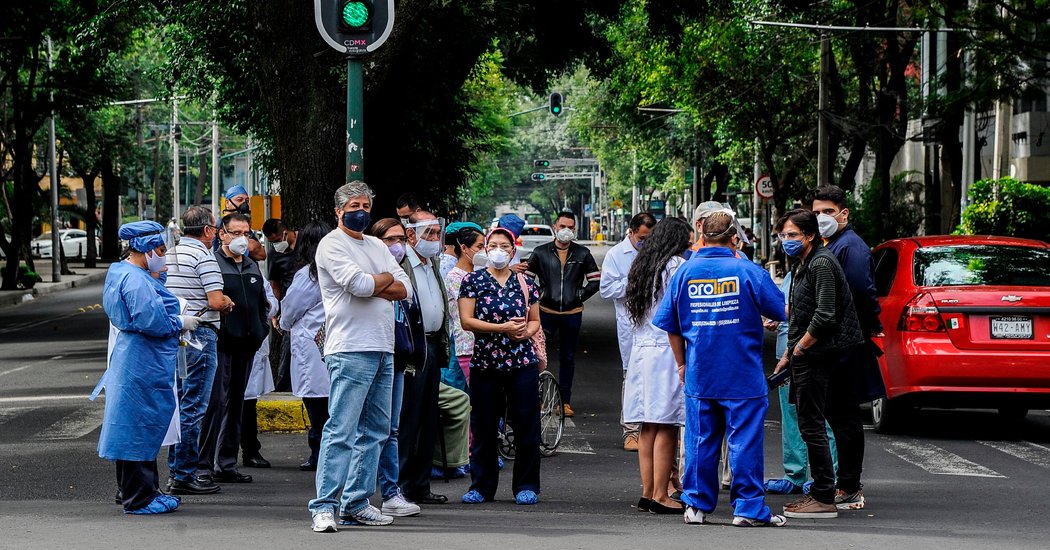 The powerful earthquake, centered near the Pacific coast in Oaxaca, was felt hundreds of miles away.

A strong earthquake shook southern Mexico on Tuesday, killing at least one person, causing buildings to shake hundreds of miles away, prompting residents to flee their homes and offices to seek safety in the streets under the open sky.

The magnitude of the earthquake was 7.5, according to Mexico’s national seismological service, and focused on the Pacific Ocean, about 14 miles off the coast, south of Crucecita, a coastal city in the southern state of Oaxaca that has been popular among tourists. It struck at 10:29 am local time.

However, the United States Geological Survey estimated the magnitude at 7.4 and placed the epicenter about 12 miles inland; It is not unusual for preliminary measurements to vary.

Another earthquake, estimated by the USGS at magnitude 4.9, struck the same region on Monday night.

At least one person was killed, but the damage was minimal.

Government officials said at least one person in Oaxaca had died, possibly two, but news of the casualties was still incomplete.

In a Twitter video, President Andrés Manuel López Obrador transmitted the news of some collapses of walls or buildings, one of which had killed a person. But overall, there were few immediate reports of serious damage or injury.

The area closest to the epicenter is largely rural, and the closest sizable city is Oaxaca, the state capital, more than 90 miles away.

Mexico City Mayor Claudia Sheinbaum said that neither the city’s security command center nor the officials conducting city flybys had reported any “serious” impact of the earthquake.

Flora Pedro Mora, the administrator of Mansiones Cruz del Mar, a condo-hotel complex near Crucecita, described the earthquake as “horrible.” “It was like one of those movies,” she said, shuddering audibly.

But she said that aside from a few shingles that came loose and fell to the ground, the property was not seriously damaged. Although some hotels and resorts in the area, commonly known as Huatulco, had begun reopening last week after a prolonged closure due to the pandemic, Mansiones Cruz del Mar was still closed to guests.

The state oil company, Petróleos Mexicanos, reported that the earthquake caused the temporary closure of its refinery in the port city of Salina Cruz and a fire that was quickly extinguished.

The United States National Oceanic and Atmospheric Administration said there was a “potential threat” of a tsunami off the coasts of Mexico, Guatemala, Honduras and El Salvador.

Powerful offshore earthquakes can trigger devastating tsunamis such as those that hit Fukushima, Japan in 2011, and Aceh province in 2004, but it is difficult to predict which earthquakes will cause such destructive waves.

The state of Oaxaca has been devastated by earthquakes before.

In 2017, at least 90 people died after an earthquake with a magnitude of 8.2 on the high seas in the middle of the night, which mainly affected the states of Oaxaca and Chiapas. That earthquake generated a tsunami.

The aftershocks continued for days as volunteers in Juchitán, a provincial city of 100,000, scratched up piles of rubble that left the buildings collapsed, searching for survivors.

Weeks later, a separate earthquake near Mexico City killed at least 248 people, including children who were buried under a collapsed school.

Many Mexicans have become accustomed to earthquakes, taking them as an immutable fact of life. The country is located near the colliding limits of various sections of the Earth’s crust.

In 1985, a devastating earthquake killed about 10,000 people in Mexico City. After the disaster, building codes were revised and tightened. Today, Mexico’s construction laws are considered as strict as those of the United States or Japan.

The 2017 earthquake, the most powerful earthquake in Mexico in a century, occurred near the Central American Trench, an area in the eastern Pacific where one slab of the Earth’s crust, called the Coco Plate, slides under another, the American, in a process called subduction.

Subduction releases large amounts of energy, and if the landslide occurs under the ocean, it can suddenly move a lot of water. Subduction zones, which surround the Pacific Ocean, cause the world’s largest earthquakes and most devastating tsunamis.