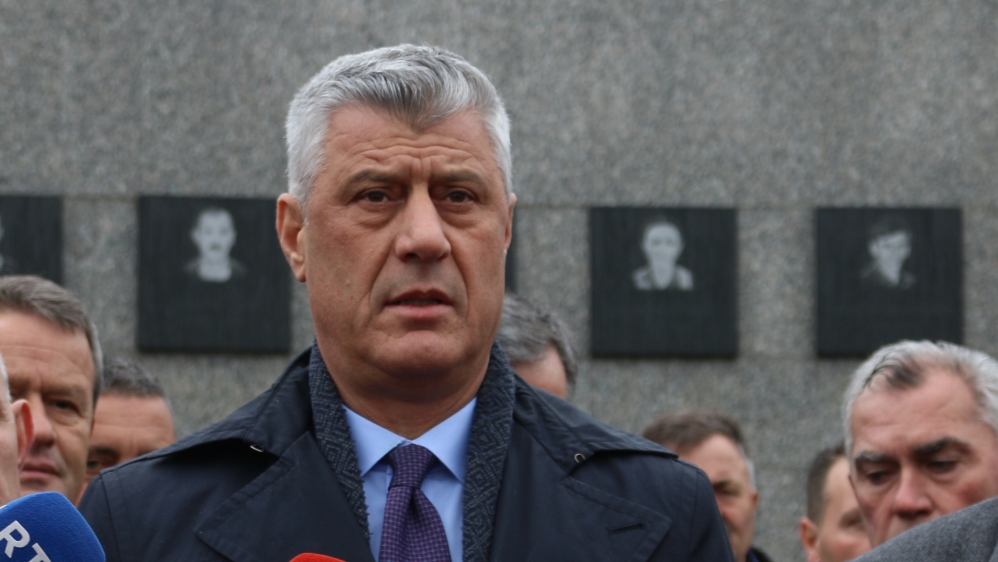 Kosovo President Hashim Thaci accused international justice of “rewriting history” after being accused of war crimes related to the 1990 conflict with Serbia.

On Wednesday, prosecutors at a Kosovo special court in The Hague indicted the former political leader of an ethnic Albanian armed group.

On Friday Thaci said on his Facebook page that he was returning to Kosovo from the Albanian capital Tirana and will address his compatriots on Sunday.

“No one can rewrite the history of Kosovo,” he said in his first reaction to the charges.

Thaci’s Kosovo Liberation Army (KLA) rebelled against Belgrade more than 20 years ago, when Kosovo was a province of Serbia.

He and others were indicted by the Kosovo Chambers of Specialists for war crimes and crimes against humanity linked to the 1998-99 war that left more than 10,000 dead, overwhelmingly Kosovo Albanians.

“I remain hopeful that the next few days will be the best for Kosovo and Albania,” he said.

Thaci previously said he would comply with the court and that he is innocent and “has nothing to hide.”

The President and other suspects are accused of murder, enforced disappearance, persecution and torture against “hundreds of known victims of Kosovo Albanians, Serbs, Roma and other ethnic groups and include political opponents”.

His right-hand man, Kadri Veseli, the former KLA spy chief who now heads the Thaci-founded political party, was also accused of the crimes and dismissed as “false.”

The charges still need the approval of a pre-trial judge, but prosecutors said they made the charge public because Thaci and others have been trying to “obstruct the work” of the court, which operates under Kosovo law but has international judges.

Thaci is unlikely to face an arrest before a judge approves the accusation, which could take months, though a court spokesperson declined to specify.

In Kosovo, fans and detractors came to the defense of the rebels who rose up against Belgrade.

The left-wing Vetevendosje party, which harshly criticizes Thaci, described the conflict as a “pure and just war.”

The conflict ended after a US-led NATO intervention in 1999 forced Serbian troops to withdraw.

But KLA members were also accused of atrocities against Serbs, Roma and ethnic Albanian rivals during and after the war.

Thaci was charged while traveling to the United States for a summit with Serbia on Saturday that has now been postponed.

Kosovo proclaimed its independence in 2008, but Serbia, like its ally Russia, does not recognize the move.