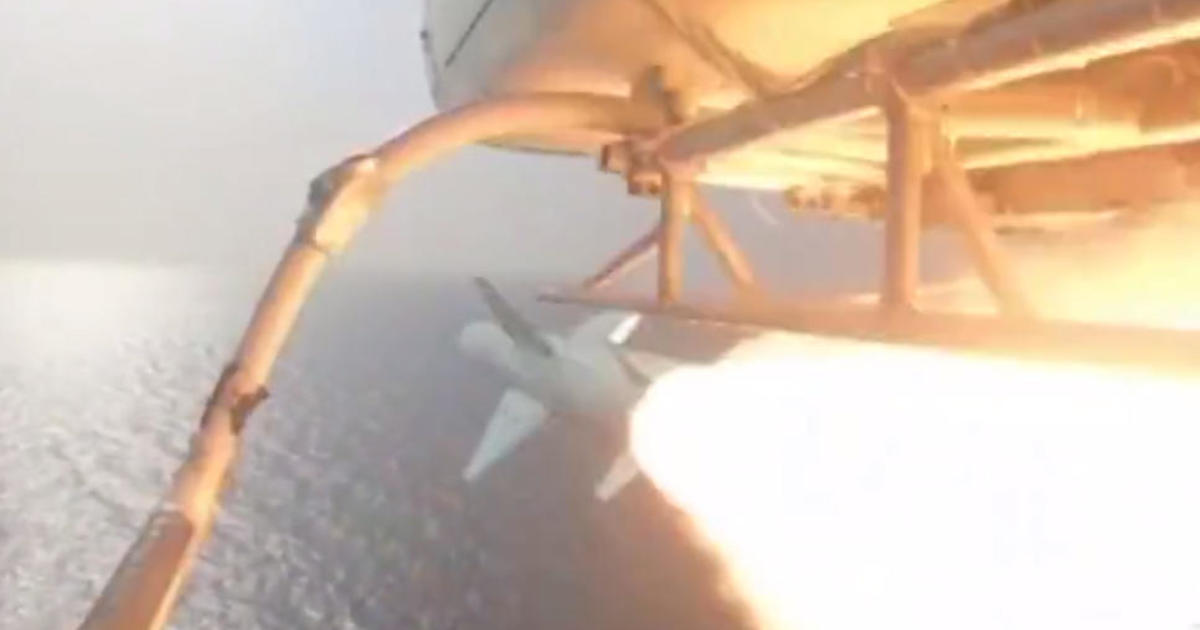 Iran’s paramilitary Revolutionary Guard fired a missile from a helicopter at a replica aircraft carrier in the strategic strait of Hormuz, state television reported on Tuesday. The exercise aimed to threaten the United States amid tensions between Tehran and Washington.

The drill, on a waterway through which 20% of all traded oil passes, underscores the lingering threat of military conflict between Iran and the United States after a series of incidents against oil tankers occurred last summer. the region. In January, a US drone attack. killed a senior Iranian general in Baghdad and Tehran they responded by firing ballistic missiles at US forces in Iraq.

While the coronavirus pandemic has engulfed Iran and the United States for months, there have been growing signs of a confrontation as the United States argues that it will extend a UN arms embargo on Tehran that will expire in October. A recent incident in Syria involving a American fighter jet approaching an Iranian passenger jet It has also renewed tensions.

The Iranian commandos quickly descended from a helicopter to the aftershock in the images transmitted on Tuesday of the exercise called “Great Prophet 14”. Other images showed speedboats circling the model, kicking up white waves as it went.

Iranian troops also fired anti-aircraft batteries at a drone target in the exercise from a location that state television described as near the port city of Bandar Abbas. Troops also fired missiles launched from land trucks and speedboats at sea, as well as shoulder missiles.

The Guard will use “long-range ballistic missiles with the ability to hit aggressive long-range floating targets” during the exercise, said Abbas Nilforoushan, deputy operations commander for the Guard, according to the Guard website sepahnews.com. That suggests the drill could see a replay of what happened in 2015, when the Guardian simulated a replica.

It was not immediately clear if all the images were from Tuesday, as an aerial surveillance image that appeared to have been taken by a drone was dated Monday.

The replica resembles the Nimitz-class carriers that the US Navy routinely sails in the Persian Gulf from the Strait of Hormuz, the narrow mouth of the waterway. The class’ namesake USS Nimitz has just entered Middle Eastern waters late last week from the Indian Ocean, likely to replace USS Dwight D. Eisenhower in the Arabian Sea.

It is unclear when or if the Nimitz will pass through the Strait of Hormuz or not during its time in the Middle East. The USS Abraham Lincoln, deployed last year when tensions initially increased, spent months in the Arabian Sea before traversing the strait. The Eisenhower crossed the strait early last week.

The Bahrain-based 5th Fleet of the United States Navy did not immediately respond to a request for comment. However, a spokeswoman said Monday that the Navy remains “confident in the ability of our naval forces to defend against any maritime threat” after satellite photos showed that the fake aircraft carrier was moving into place.

“We cannot talk about what Iran hopes to gain by building this model, or what tactical value they would expect to gain from using that model in a training or exercise setting,” said the Commander. Rebecca Rebarich told The Associated Press then. “We are not seeking conflict, but we remain prepared to defend US forces and interests against maritime threats in the region.”