I lived like an astronaut in solitude for months Space 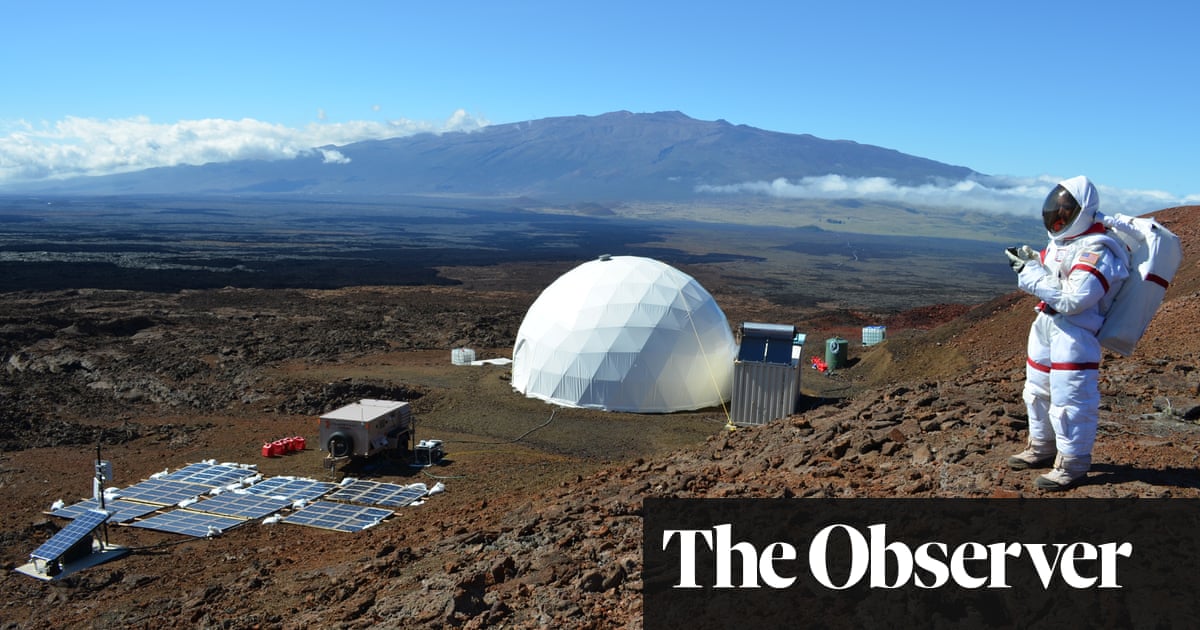 Once At one time I lived on Mars. Or something close to it. I was a science journalist at the time and did not necessarily have a clear choice for this mission. And yet I found myself on it. This was 2012 and Kim Binsted, a professor of information and computer science at the University of Hawaii, along with Jean Hunter, a professor of biological and environmental engineering at Cornell, called on “almost” astronauts to participate in four months. “Mars” mission.

Binsted and Hunter wanted a crew that, according to NASA, could be technically qualified for space flight in terms of education and experience. They were also looking for celebrities such as astronauts, who, according to Binsted, showed “thick skin, a long fuse and an optimistic outlook.” About 700 people worldwide applied.

Somehow they liked me and so, between April and August 3101, I was living alone with five other unusual-astronauts, all of us offering different concessions like bathing in wet wipes, social media at different times and staying away from zero for cess. . Fresh fruits or vegetables.

We lived inside a huge, white geometric dome just ahead of the road access road at 8,000 feet on the Hawaiian volcano Mauna Loa. The scene was very red, very rocky. Very mars. There was limited electricity and water. We can only leave the dome by wearing outerwear like a huge, cumbersome, space suit. When we had an emergency mobile phone, our only regular contact with Earth was via email. And because Mars was so far away, our email broadcast was 20 minutes late in every way, a copy of the actual communication experienced by Martian researchers. It wasn’t your typical Hawaiian vacation.

For all science, though. Bansted and Hunter’s main research question about food was this: Does it make sense for astronauts to cook their own food after landing on Mars? Data have shown that astronauts on a six-month mission to the International Space Station eat less over time and lose weight, putting them at greater risk for illness and injury. Binsted and Hunter wanted to measure the importance of cooking and meals in solitude in general – how food affects the physical, mental and social health of the crew.

On earth it may be clear that food is more than just the health of the body, it plays a psychological, social and cultural role, and it nourishes the spirit and our relationships with others. But asking complex questions about the role of food on Mars missions and putting a new Mars analog around these questions? It’s really radical. And so, for the study of this food, we ate a mixture of pre-prepared meals, as well as meals, which we cooked in our small yet well-equipped Martian kitchen.

We logged changes in our appetite and weight and took tests to measure our ability to breathe and recognize odors from our nose, all related to appetite and food satisfaction. There were also about a dozen other experiments, – antimicrobial socks, tests of mental agility, attempts at behavioral surveys, the list goes on. We lived and breathed survey questions for four months. Four months of solitude. Four months of the same people, the same seats at the table, the same clothes, the same smell, the same routines, looking at the same rocks outside the same window. No sun on our skin, no fresh air in our lungs. I don’t want to aggravate the problem – we were never in any terrible danger. But there were some aspects of the experience that I didn’t get to try.

I missed the face-to-face conversation with my wife. I wish to change the scene and better indoor lighting. Swimming in the sea or pool. In the woods

We were warned about the effects of isolation, large and small. Minor ways: Short mention during our pre-mission conference tells about the tension between the crew members and their friends, family and mission support coming back home. The big way: several hours long discussions to find out what our breaking point will be. Will we leave the mission if we suddenly get a job offer? What if someone falls ill back home? What if someone dies? What if we get sick? How sick Mentally? Physically? What if we have lost all confidence in our crumates or project? And how do we plan to manage the well-documented challenges of isolation? These challenges included, but were not limited to, what scientists call the “third quarter” syndrome, in which itching can occur anywhere but ends with your five best friends inside the dome when the end appears, but not quite within reach. . Diaries of Arctic and Antarctic expeditions indicate that it is a special time for your mission, three quarters. You’ve gotten used to your routine and found a rhythm, but the harsh reality of being separated from others, the demands of your duties, and the mess of your crumates have begun to wear on you.

Here, I was guilty, somewhat speculative. As a writer, I notice a few things. Small, finely detailed irritations pull at me and then keep flicking the back of my head. I changed the number of consecutive toilet paper in the first floor bathroom. The ence of a crumate’s hard-soled sandals falling down the stairs, remarkably consistent and always very loud. I also wondered why one of my crumates kept her crossed legs dangling under the table at every meal so that with her fuzzy slippers always tapping me gently, as if to reach an incredible distance to make a little contact, even then I was under the chair I will support my legs well. But what really surprised me was, why couldn’t I tell him to stop?

This makes it all Am I making myself sound a little shaky? Unsafe to live in solitude with others? Maybe. But I know I was not alone. One crew member complained of another’s frequent throat clearing. Another suspicion is that his position on the boring chart is inappropriate as it has given him a lot of back-to-back heavy tasks. Then, when he traded with one of us and got himself into even worse work than before, he became even more frustrated.

Our crew got reasonably well – I would say functionally most of the time and also happily calmly on occasion – but some personalities didn’t clash. There were some hallucinations and some isolated-inside-loneliness incidents – going into that room and staying there longer than the culturally accepted time. We would develop our own culture for what was socially expected, but for some crews whose personalities were not well suited for consensual social interaction, this proved to be a stress. Some of us are still on good terms, yet some of us don’t talk to others. One of us moved to New Zealand about a year later and has not been in contact since.

Yet when we were together, our goal was based on our faith and understanding of each other, the short duration of our conversation, knowing when we were serious and when we were joking, and the subtext and motivation behind it all.

How uncomfortable I felt a few days ago before answering interview questions from the news media and people in general. That may sound strange, but I wonder who I can trust. I spent more than four months creating a special and insulated type of camaraderie with my crumates. But how to live with others? Outside of that dome, all of a sudden I wasn’t sure.

I didn’t know it at the time but, over the years, I’ve come to realize this: Mars changed me. The science of that mission flooded in and blended in with the personal experience of the project. Questions like quotidian survey, how hungry are you? How full? Who have you talked to the most today? At least? What was the best thing about your day? What was the worst? Somehow it started to feel like a big question not only to the astronaut on the space mission, but to me, personally or to anyone.

Issues like communal versus personal food stores, which you trust, how to behave when privacy is at a premium and when resources are scarce. These are exactly the issues that concern large communities, nations and the whole world. Some research questions on imaginative Mars missions have gone beyond their desired limits. I could see how they were about everything and all of us.

In the days and weeks after returning, my crew and I ate fresh fruits and vegetables that broke into our mouths, we swam in the ocean, and we defended with Binsed, shared some of our more personal and proud observations during the mission, all in service, we Believe me, Mars has a better idea of ​​the future. Going back home those last days is ambiguous, although I remember the intensity of some of the sensations. Loud noises easily surprise me.

It took me days to notice the slightest gust of wind on my skin. Even for a long time, I struggled to find the best way to express my experience. I immediately avoided media fuss, phone and television interviews. I just couldn’t find the soundbites. I was experimenting as a journalist and as a kind of citizen-scientist. The purpose of most news reporting is to tell a story with a kind of objectionable purpose and authority. But for me, I felt a shift in my Mars story, my saying it is variable. I don’t think it’s fair to say that I know what it really means. And it wasn’t just about what happened on the mission or inside the dome. It has re-emerged by touching everything in my life. The HI-SEAS mission really changed what I believe about space exploration. But it also helped me to pay more attention in general. I am talking here, about my people and my relationship with my planet, that I must admit, I have never seen with such clarity as I did in the first few weeks immediately after the mission was over.

In the years since, I have become a stranger in many ways to the first person to enter the Martian dome on Mauna Loa. I write less journalism, more essays and poetry – more interested, I believe, in subjective and adventurous, in mystery and instead of looking straight at something. I have changed jobs, gone to school again and moved across the country. I have made and lost friends. My eldest brother is dead. My long relationship with my wife is over, and I, for the first time in 14 years, live on my own, thinking differently about the meaning of home, the meaning of exploration and separation, collaboration and partnership. Stories are told, and beginning and end.

When an astronaut returns, the earth was not where it was. The whole system is frozen from below and around, which is of course the invisible pain at the hands of our local galaxy. “There’s no one out there,” as Gertrude Stein said of Ak Cland, who as an adult did not recognize her from the city of her childhood. It’s like anything, though. You say goodbye and come back, and it’s not the house it was. But sometimes dispatch is the only way to know if he was ever home in place.

Once Upon a Time I Lived on Mars came out of: Space, Exploration and Life on Earth by Kate Green, published by Icon Books on January 14.99, published at 13.04 from Wali Bookshop.com