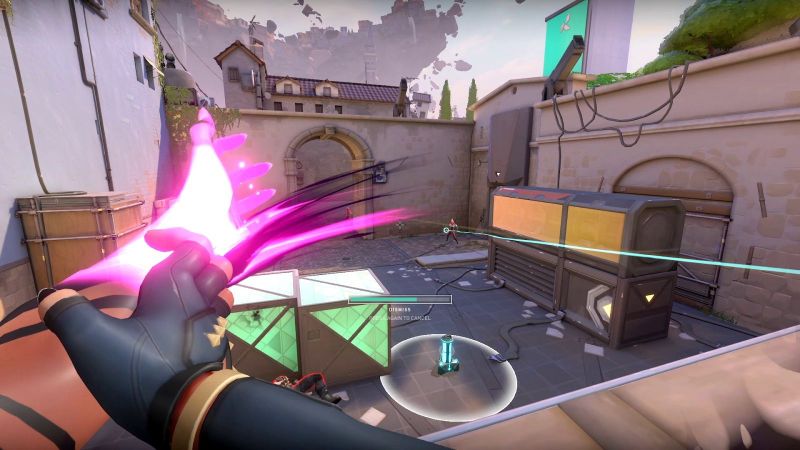 If you’re not that familiar with some of the competitive setups that directly affect tactical first-person shooters, then you’ll be a bit confused as to why players are willing to drop an established IP to get higher tick rates.

You’ve probably heard of CS: GO players leaving the game for Valorant due to rampant cheating issues. Not only is the Valorant ‘Vanguard’ software more powerful than VACnet, but the game is also much more accessible and boasts of a lower skill ceiling than CS: GO.

Leaving a game for these two points sounds quite reasonable, doesn’t it? Leaving server tick rates will sound even weirder to those who are new to the FPS genre.

When Riot Games promised 128-tick servers at Valorant not only for professionals but also for average gamers, we realized that Valorant developers take the competitive integrity of their new game very seriously.

So for the uninitiated in the competitive FPS scene, let’s explain how luxurious a 128-tick server is.

What is the “tick rate”?

In simple terms, the tick rate is the frequency with which a server you are playing on is able to update what you or any other player is seeing. Usually it is measured in Hz. So when a server shows that it is capable of a tick speed of 64 Hz, it means that it is capable of updating or rather sending new packets of information 64 times in a second.

Therefore, a server with a tick rate of 128 will update the information twice as fast, and there will be no loss of visual information when many things happen at the same time on the map.

Why are players looking for a 128 tick server?

Now, to understand the importance of a 128 tick server in the life of an FPS player, we must first take a look at its history with some other popular shooters.

CS: GO, for example, provides Valve servers which by default are 64 ticks for the most part. But 128-tick servers are also available. Players will have to pay a small monthly fee and access them through third party companies like FACEIT and ESEA.

Professional CS: GO gamers prefer a 128-tick server more than anything else. As more frequencies will generate more information per second, the improvement in the game that professionals experience is quite significant.

However, that does not mean that the average player will not benefit from it as well.

Have you ever wondered why you were the one who died in a 1v1 scenario, even when you had to drop your opponent? Latency aside, the server’s tick rate is an important factor for players dying in such situations.

The lower the server tick speed, the slower your game will be sent and received, slowing down the visual update as a result.

The difference in latency between 64-tick and 128-tick servers is so great in CS: GO that there are actually two different alignments for server-based utility.

According to assistant professor of arts at the NYU Game Center, Naomi Clark:

“A 128-tick server is twice as fast at thinking and processing the changes a player makes in the game.”

This makes the gameplay very accurate, and getting the drop on an enemy will result in you winning the duel unless you horribly ruin your aim and lose your shots. By having fewer unrecorded hits, your aiming aim will not only improve a shooter’s competitive integrity, but will dramatically reduce the peepers’ lead alongside him.

Unlike ping, latency, packet loss, and FPS drop, a server’s tick rate is the only thing a company has under their control when it comes to the gaming experience. So when Riot promises 128 ticks on all of his Valorant servers, we can’t help but feel like it’s a tough request for a company that has just entered the FPS genre.

What makes 128 tick servers so luxurious?

So why do we think Riot may not be able to deliver on its long-term promise when Valorant becomes even more popular with a strong eSports scene?

The answer to this is quite simple actually. The 128-tick servers are a luxury that no shooter to date has been able to provide to his players outside the competitive stage.

Take the example from Call of Duty: Warzone; which is a new Battle Royale game from a company that has been active in the FPS genre for generations. You can only provide a server of 20 ticks per second to your players.

CS: GO, on the other hand, even after being eight years old (Counter-Strike as a series turns 21 this year) can only provide 64 ticks in standard pairings outside of FACEIT, ESEA and Majors.

So why are these companies, which have been on the field for so long, unable to provide players with 128 tick servers?

The main reason is that 128 tick servers are very expensive and, according to Naomi Clarke,

“If you think about the number of servers running to support a big game, where there are tens or hundreds of thousands of people playing, if you suddenly need to double the processing power, then it’s a huge increase in cost.” “

Right now, it’s pretty hard to say how much the cost will increase, as we’re not exactly aware of the number of available servers they have and the traffic load they’ll face once Valorant’s popularity increases.

The number of variables is quite a lot, and we won’t be able to get an accurate estimate; However, to get a rough idea, let’s take a look at Google Cloud and its servers.

Google Cloud has been offering its game servers to many IPs for some time, and its CS: GO servers cost from $ 50,000 to $ 100,000 per month, depending on the requested tick rate.

In an article by Ethan Davison of The Washington Post about Valorant’s highest tick servers, the writer states that:

“The most competitive games use dedicated servers to guarantee fast gameplay, which are much more expensive than a generic ready-to-use service. Activision’s annual investor reports, where server costs combine with customer service expenses, give a better idea of ​​the expense: in 2017, the company spent about $ 1 billion on gaming operations. “

Professionals suggest that a higher tick rate pays off

When asked about the importance of a higher tick rate, the T1 Valorant pro academy, Kurtis “Kurt” Gallo, said that there is a significant difference between a 64 tick server and a 128 tick server:

“[At a low tick rate] I could shoot someone who is falling, and maybe five or six of my shots will hit, but if you jump to 128 ticks, each of those shots will hit the target.[.]”

Now, once a popular title begins to take its eSports scene seriously, it will generally try to improve the game’s competitive integrity by improving the responsiveness of the servers. So when the Overwatch League servers went from 20 ticks to 60 ticks, many of the pros were happy at first, but still felt that the competitive stage needed 128-tick servers.

“His (Overwatch) competitive community surely appreciated it because it was a huge improvement, but unfortunately, it wasn’t the 128-server private server feel that CS: GO has and everyone wants. The difference between LAN and online will always be huge unless you play on 128-tick servers with little or no pinging. “

Valorant has been stepping up his game so far

Valorant, for now, has been able to provide 128 ticks on its servers. Although there have been a lot of issues with their servers since the release of the Valorant closed beta, from crashes to bugs and even exploits, the tick rate has never been an issue.

Due to this fact, there will be no need for paid third party sites to maintain Valorant’s competitive integrity.

“The Valorant team has gone to great lengths to determine the best combination of tick speed and latency that minimizes observer advantage, and those tests showed that a tick rate of 128Hz and a latency of 35ms (or less) it would be the best for our players. ” Blind tests also showed that elite FPS players … can reliably detect when the game is running at a slower tic speed. “

However, there are still some reservations among players, as Valorant’s server locations will hamper the quality of the competition as well as expense. But Riot said they will find a solution to this by providing Valorant data centers in major cities around the world.

For now, we’ll have to wait and see how things play out and how the Valorant eSports scene will kick off. But for now, Valorant’s promise of 128-tick servers has attracted many players from other FPS genres, especially CS: GO.