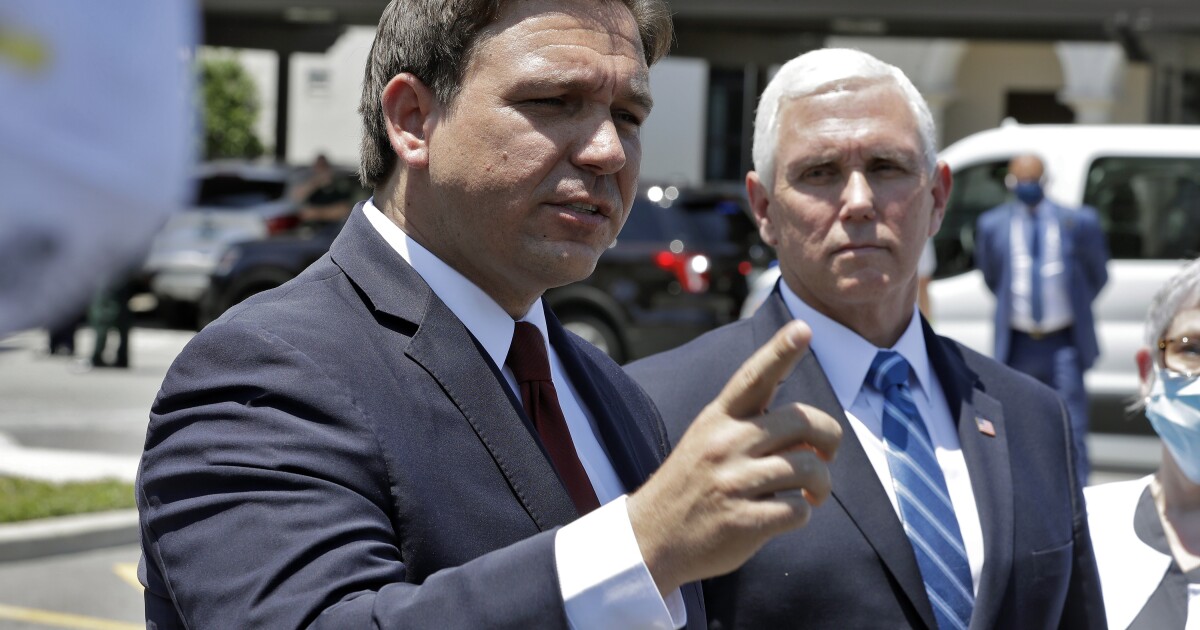 Rich Lowry, editor of the conservative National Review, may have secured the trophy for outstanding self-responsibility in covering the ongoing coronavirus pandemic for a May 20 article titled: “Where is Ron DeSantis going to apologize? “

Lowry’s goal was to defend the Tea Party-backed Republican governor’s approach to the coronavirus crisis. DeSantis “has taken this seriously from the start, has been immersed in data and research, and has come up with a well-considered response,” Lowry wrote in an editorial accompanying the full article.

However, “the media has portrayed DeSantis as a yokel who was going to kill Floridians with his lax approach,” Lowry continued. “Conventional wisdom has begun to change about Florida, as the widely predicted disaster has not materialized.”

We have been successful and I think people just don’t want to acknowledge it because it challenges their narrative.

Florida Governor Ron DeSantis, declaring victory over the coronavirus on May 20

Lowry managed to simultaneously display his own ignorance of the emerging catastrophe and created DeSantis for a great reckoning. This is because the widely predicted disaster has now swept Florida in all its glory. Lowry and DeSantis declared victory too soon.

The percentage of tests that tested positive for COVID-19 also shot up, to 14.74% on Friday. That is well above the 10% threshold that public health officials say suggests an infection rate that is under control, and well above the national average of 5.5%.

We have reported on DeSantis’ strategy and confidence in his wisdom before. So, and now, we do not want to criticize DeSantis for the increase in the pandemic within the borders of his state. He is not the only governor who is unsuccessfully dealing with the coronavirus.

Infections have increased in other red states, especially Texas and Arizona, and also in the blue states.

California, where Governor Gavin Newsom instituted an order to stay home for the first time in the nation and has supported social distancing measures and the wearing of masks in public, and issued a mandatory mask order on June 16, has experienced an alarming increase in cases.

As my colleague Taryn Luna reported, the number of hospitalized patients in California increased 32% in the past two weeks to 4,240, double the increase of two weeks. of the 16% that Newsom had reported on Monday. The state’s proportion of positive tests, however, has remained stable at approximately 5.1%.

Overall, 33 states are experiencing an increase in the number of cases, so politics is not necessarily the only defining factor in the battle.

These trends point to the difficulty political leaders face in encouraging socially responsible anti-pandemic behavior, such as staying home and wearing masks, among residents who have grown weary of the restrictions, especially in the context of limited or no progress against virus.

In California, Newsom has had to accommodate local officials and voters who resist these policies by allowing them to reopen commercial establishments and public spaces, even when the coronavirus is not under control.

So what makes DeSantis a special case? It is that he is a governor who turned the battle against COVID-19 into a political problem.

The main politicizer of the battle, of course, has been President Trump, who from the beginning described the crisis as a personal affront, treated anti-virus measures as political darts aimed at himself, completely refused to set an example to the public by participating in them, they portrayed the success against the pandemic as political validation.

Now that the battle is being lost and more than 120,000 Americans have died from the coronavirus on their watch, Trump is missing in action, as is the rest of his administration.

Consider how things might have turned out differently if you had simply advised Americans to put on masks in public and do it yourself, as a model. Thousands of lives could have been saved and the notion that going bare-faced was some kind of political statement would have been stifled in his crib.

DeSantis has played the role of an apprentice Donald Trump for much of the pandemic period. He personalized the criticism of the state’s policies, as if it were him. He complained that he was the target of a “typical partisan narrative” that predicted an increase in illness cases linked to an alleged premature reopening of Florida by commercial businesses and recreation areas.

He complained that the media “had been poetic for weeks and weeks about how Florida was going to be like New York,” and bragged that it was just the opposite.

Their March 24 order requiring visitors from New York, New Jersey and Connecticut to be quarantined for 14 days, was directed at “people fleeing to Florida from states where” shelter-in-place “orders are implemented. , including the New York Area Tri-State “, seemed to play a red-state vs. blue state.

That was especially so because Florida had opened its beaches to spring break that threatened to export the disease nationwide. (Now the shoe is on the other foot, as the northeastern states that finally controlled their cases have imposed quarantines on Florida travelers.)

“We have been successful,” DeSantis said on May 20, “and I think people just don’t want to acknowledge it because it challenges their narrative.” That was the day Lowry published his hymn to DeSantis’ Superior Wisdom in the National Review.

Other Republican governors played the same game. Like Trump, some of these governors tried to stop the pandemic by limiting public access to the data, firing statistical analysts, or even manipulating the figures.

Some went even further than DeSantis by actively interfering with local antivirus efforts. Republican Arizona Governor Doug Ducey banned towns from requiring masks, although he lifted the restriction a week ago.

Ducey promoted the idea that the coronavirus was under control by lifting the order to stay at the state home on May 15, despite warnings that it was premature. Ten days later, the number of cases in the state began to increase, reflecting the median time frame between exposure and symptoms. Arizona is now the main infection growth point in the country.

In Texas, Republican Governor Greg Abbott oversaw one of the nation’s most inept responses. He didn’t issue an order to stay home until April 2, then lifted it on April 30. It also banned local officials from imposing rules for wearing masks.

Texas has joined Arizona and Florida among the top hot spots in the country. Now all three are trying to get away from the edge. Ducey and Abbott have slowed the reopening of their states. Abbott closed Texas bars, ordered restaurants to reduce capacity by 50%, and banned outdoor gatherings of more than 100 people. DeSantis banned the sale of alcohol in Florida bars.

However, the damage has already been done. All three governors explicitly or implicitly promoted the notion that behaviors such as wearing masks were a matter of individual choice, a distorted expression of “personal freedom.”

However, the freedom to infect your neighbors and infect yourself is not freedom at all. Political leaders who downplayed the magnitude of this public health crisis, failed to take action or block smart actions, and mocked the freedom they granted their states were playing politics for no reason other than personal gain. The virus disrespects politics and is making its constituents pay for their leaders’ failure to do so.