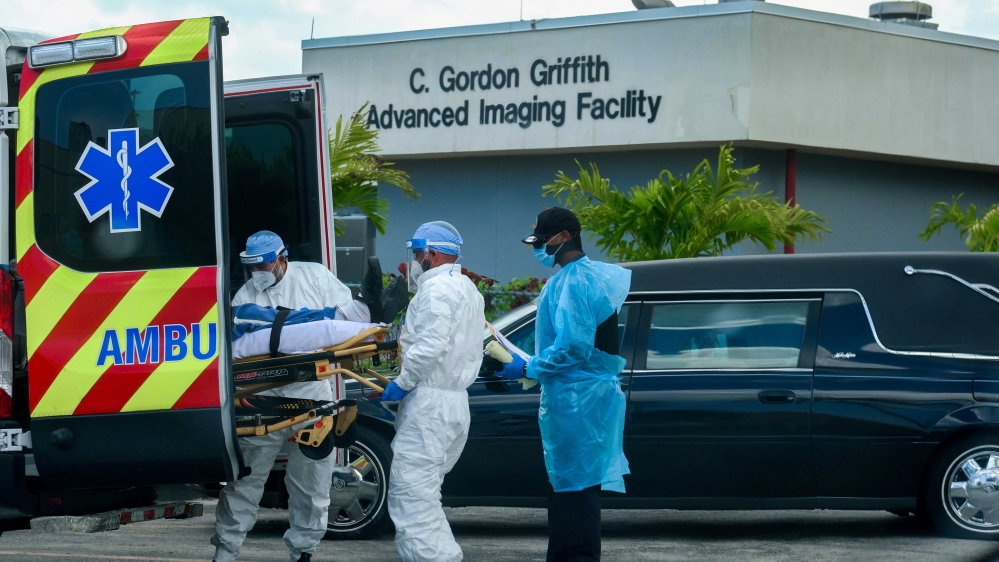 As the coronavirus ravages Florida, healthcare workers in Miami hospitals struggle to cope with the emotional and physical impact of treating a crushing wave of COVID-19 patients.

After seeing 10,000 new cases per day become the statewide norm in July, many of those on the front lines are frustrated with the apparent inability of federal, state and local governments to coordinate an appropriate response. They are equally appalled at what appears to be the reluctance or refusal of many Floridians to abide by security precautions to stop the spread of the coronavirus.

“I know, and my colleagues know, that we are putting a band-aid on a problem, we are supporting people as best we can so that they can get ahead, but the real fight happens outside,” said Dr. Eric Knott, a critical and pulmonary care fellow working at three of Miami’s largest hospitals. “If you can’t stop the spread, all my work is for nothing.”

For Miami doctors, concerns about the virus far outweigh those caused by even the biggest hurricanes.

“A hurricane tends to be a kind of finite amount, and this is infinite,” said Dr. Mark Supino, physician in charge of the emergency department at Jackson Memorial Hospital.

A curfew was imposed at 8 pm in Miami Beach, Florida, USA, due to COVID-19 escalation cases in the city [Liza Feria/Reuters]

Many health workers and union leaders criticized Miami’s reopening several weeks after the number of cases of the new coronavirus began to rise in early March.

State health officials reported a total of 432,747 cases across Florida, with 77 new deaths, bringing the total to more than 5,900 as of Sunday night.

While the death toll in South Florida has not come close to that of New York City, an early epicenter of the US outbreak, hospital beds and intensive care units across the region have filled, and in some cases have exceeded it.

At Jackson Memorial Hospital, the region’s largest facility, officials called hundreds of additional medical workers as employees became ill and had to stay home or be hospitalized. An auditorium was sealed and prepared for COVID positive patients with a negative pressure system to limit air flow and prevent further infections.

Among the most difficult and stressful parts of the job is the large number of patients in the ICU.

A warning sign about the spread of COVID-19 in Miami Beach, Florida, USA. [Zachary Fagenson/Reuters]

Health workers must constantly monitor patients’ vital organs with respirators, and many patients have to be turned over and over again to avoid any complications from lying in one position for an extended period. Doing so without risking disconnecting any of the life support systems can take up to six people.

The intensity has overwhelmed some.

Jude Derisme, vice president of Service Employees International Union 1199, which represents 25,000 medical workers across Florida, said the union had to help lift a nurse, a 25-year veteran, from a hospital floor after a “collapse “

“My fear is that if we don’t find a way to reduce these numbers in the next two weeks, if they are worse than the last two weeks, they will stretch us too much,” said Martha Baker. a registered nurse and president of the Service Employees International Union 1991, representing some 5,600 medical professionals within the Miami Jackson Health System. “The sad news is that this is when patients die.”

While their union chapter, along with others across Florida, has advocated for more personal protective equipment, better overtime pay, risk pay and workers’ compensation for those displaced by the virus, they also recognized that medical workers they could only do so much against the pandemic.

“This is war, and instead of bullets we have viruses,” Baker said. “If we don’t find a way to cushion our curve, we keep chasing our tails.”