Hannity City Council with Trump and evidence of an ‘information tragedy’ 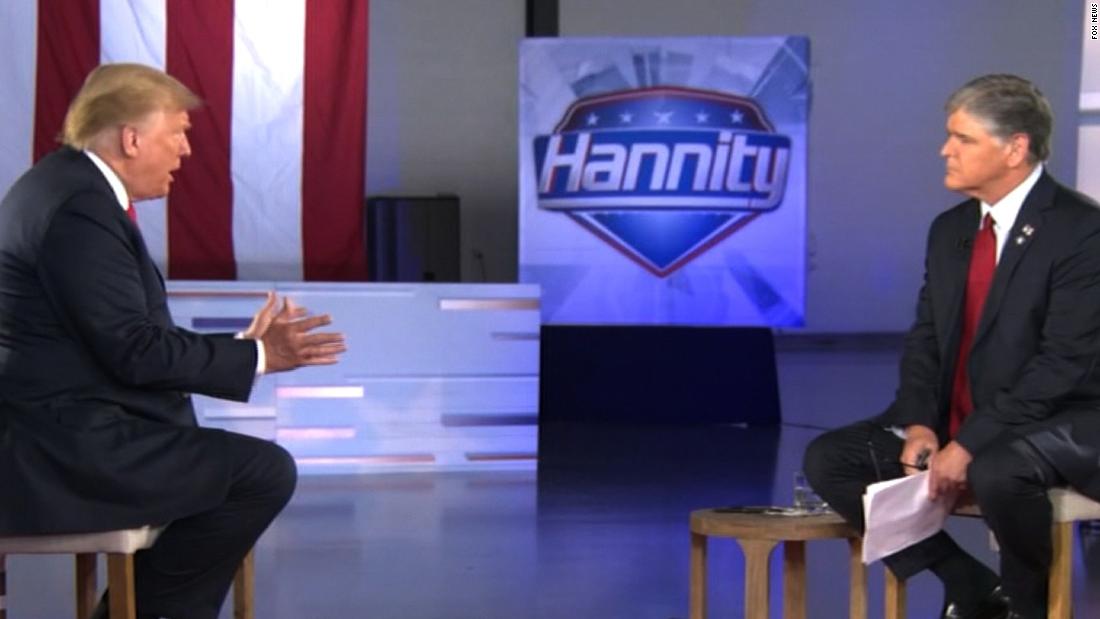 If you think the best propaganda is the type that masquerades as news, then Thursday night’s “town hall” was bad propaganda. Sean Hannity sat down with the president in front of 50 supporters in Green Bay, Wisconsin, and they exchanged talking points back and forth during the first half of the hour. Then they went to the audience, and the first question was, “I really appreciate what you have done for this country. And I know it has been difficult. What do you think is your greatest achievement, in your eyes?”

Numerous political reporters concluded that the most important news from the television event was Trump’s failure to respond to this Hannity softball: “What are your highest priority elements for a second term?”
“It’s a good question,” said CNN’s Kaitlan Collins, but Trump did not respond. She said, “It is hard to think of another president being asked about his priorities for the second term, and ultimately not providing them, just over four months before the election.
>> “The entire interview is unintelligible if you are not immersed in the right-wing media,” wrote academic Nicole Hemmer …
>> Something Daniel Dale noted: “It may or may not mean anything, but Trump has been talking with an interesting grammar about a Biden presidency, saying Tuesday that Biden will end, rather than finish, the border wall; today he said that Biden it’s ‘I’ll be your president.’ “
>> NYT TV critic James Poniewozik shared this mini review: “Events like this Hannity-Trump interview are full propaganda. But I’m also not sure they will do Trump any good other than assuring him that someone still loves him. starting to feel like palliative care. “

A view from Fox

Did the “city council” benefit Trump? Did it benefit Hannity? Well, Fox pointed to the fact that it was the first city council hearing in the midst of a pandemic, with local residents wearing masks and respecting social distancing guidelines. I think Fox News HQ’s opinion is that other networks would kill by scheduling live events like this.

But then I would add, why not put pressure on the president about the pandemic? It was an hour of missed opportunities. Perhaps the most recent quote was that Trump said “if we didn’t test, we wouldn’t have cases,” a nonsense line that Hannity didn’t question at all …

“We know what to do and we are not doing it”

CNN’s Dr. Sanjay Gupta said it best on “New Day” on Thursday morning: “I can’t believe we’re in the position we are in now. We are the largest country on Earth. We should have been able to discover this.” early. We should have been able to test. And now we still have arguments about whether we should put these band-aids in the problem, like the masks. Effective band-aids, but it still helps this problem. And we’re still not sure we want to do that. We have a patient bleeding in front of us, we know what to do and we are not doing it. “
And he said it again Thursday night at CNN’s weekly Coronavirus Town Hall: “We started behind the curve, and we’ve never caught up …”

Oliver Darcy writes: At WaPo, Christopher Ingraham took a look at three studies that have examined the role that conservative media have played in spreading misinformation about the coronavirus. Your conclusion? Taken together, they paint a picture of a media ecosystem that amplifies misinformation, entertains conspiracy theories, and discourages the public from taking concrete steps to protect themselves and others, “Ingraham concluded.

>> Irene Pasquetto, editor-in-chief of the Harvard Kennedy School Misinformation Review: “We are receiving an incredible amount of studies and solid data showing that the consumption of far-right media and social media content was strongly associated with low concern for the virus at the start of the pandemic … “

Brian Lowry adds: In addition to the study on the dangers of watching Fox primetime hosts when it comes to coronavirus information, NBC’s Ben Collins had an important thread about misinformation within Facebook groups and the difficulty of unraveling that and penetrating the disinformation bubbles in general. Money Line: “Facebook created a directory of vulnerable people who can sympathize with the invisible powers that keep them low, and for scammers to isolate and take advantage of them …”

On Thursday, the CDC announced that the actual number of Covid-19 infections could be ten times greater than the 2.4 million known cases. Merrill Brown, founder and CEO of The News Project, noted that this message was delivered in an hour-long conference call with journalists. “The news that 20 million people may have the virus deserves a nationally televised White House briefing, not a call,” he tweeted, calling it “an information tragedy.”
I asked Brown to explain what he meant, since that term is very evocative and seems very accurate. He recently wrote this CNN opinion piece on the failure of the federal leadership. He told me: “The British are wrapping up their daily press conference on Downing Street, which 80 percent of Britons say they report to. The United States has no regular public meetings, no national spokesperson shares government data or advice. The Governor Florida Ron DeSantis said there, it was “light at the end of the tunnel” on April 29. The debate over the masks is rich with misinformation with a whole world on Twitter about #AntiMaskers. According to Pew Research today, a majority of Republicans and Republican Independents (61%) say that when it comes to coronaviruses, “the worst is behind us.”

He proved his point in a single paragraph. In fact, there is a layered information tragedy about the 2020 medical tragedy …