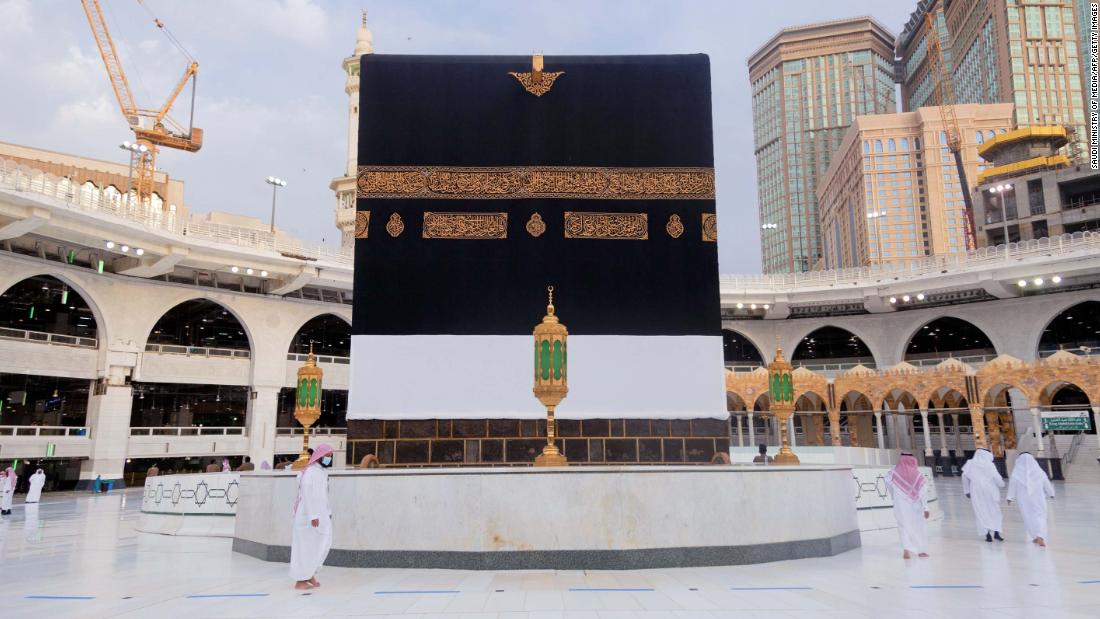 (CNN) – Islam’s largest annual pilgrimage began on Tuesday with only a small fraction of its regular number of worshipers, amid concerns about the coronavirus.
Only around 1,000 pilgrims will attend Hajj this year due to new crowd control restrictions set by Saudi Arabia. Sacred places in the cities of Mecca and Medina normally host more than 2 million people during the pilgrimage.
For the first time in decades, international travelers have been banned from Hajj. About 70% of the faithful this year are foreign residents of Saudi Arabia, and the rest are Saudi citizens. All those selected to participate are between 20 and 50 years old.

Saudi Arabia, which has the highest number of Covid-19 infections in the Arab world, has rated this year’s Hajj as “unprecedented”. Previously, Saudi authorities had hinted that the annual pilgrimage, one of Islam’s five main pillars, could be canceled, asking potential pilgrims to suspend their plans.

Staff inspect preparations around Kaaba, Islam’s holiest shrine, at the Grand Mosque in the holy city of Mecca on July 26.

“Hajj in 2020 is a truly exceptional pilgrimage by all measures,” said Saudi Minister of Hajj and Umrah Muhammad Saleh bin Taher Benten, according to a statement from the kingdom’s media ministry. “Due to the exceptional global health circumstances caused by the coronavirus pandemic, strict precautionary measures have been put in place to ensure healthy Hajj for all pilgrims.”

Workers disinfecting pilgrims’ luggage in the lobby of a hotel located near the Great Mosque of Mecca.

Authorities say pilgrims who performed Hajj this year have undergone a rigorous selection process and were required to go through periods of self-isolation before reaching holy cities. They are expected to be quarantined after their arrival and upon their return, according to the media ministry.

“This is a very special situation that we find ourselves in,” said Kehinde Qasim Yusuf, an Australian pilgrim in Hajj this year. “We also have the privilege of performing Hajj on behalf of the entire Muslim world.”

Workers and security in the Great Mosque complex, dressed in masks and socially estranged due to the Covid-19 pandemic, pray together.

For the pilgrims CNN spoke to, Hajj is a relief after months of confinement and being away from family.

“Honestly with everything I went through, going through isolation and having a family so far away, the opportunity to perform Hajj made up for it all,” said Yusuf, an assistant professor at Taibah University in Medina.

Saudi Arabia has almost 270,000 confirmed cases of Covid-19 and more than 2,700 deaths. Earlier this year, he suspended Umrah, a smaller version of Hajj that can take place at any time of the year, for fear that the pandemic may spread.

Hajj is one of the largest religious gatherings in the world. It occurs two months and 10 days after Ramadan ends, during the Islamic month of Dhul-Hijjah.

A photograph taken on July 26 shows the pillar on which Muslim pilgrims throw stones during a symbolic stoning of the devil, in the Mina neighborhood of Mecca.

The height of Hajj corresponds to the main Islamic holy day Eid al-Adha, which commemorates Abraham’s willingness to sacrifice his son on divine orders.

The pilgrimage, carried out over five days, includes numerous detailed rituals including the wearing of a special garment symbolizing equality and human unity before God, a circular procession counterclockwise around the Kaaba, and the symbolic stoning of evil.

Another pilgrim, 29-year-old Moroccan-French Sarah Lagdaa, says that “it all happened very quickly in the application process, selection and then going through medical tests and preparing.”

“So quarantine is really a valuable time to pause, rest and think,” he told CNN. “My mother cried with joy when I told her. We haven’t seen each other since December 2019.”

Pilgrims arrive at King Abdulaziz Airport for the Hajj pilgrimage on July 25.

“I have a feeling that taking your daughter away from you and taking a big step in her faith as an ‘adult’ makes her proud.”

Commenting on the security measures, Lagdaa said it only makes her feel better when doing Hajj.

“I am happy with this quarantine because it means that the Hajj Ministry is taking good care of pilgrims and prioritizing health,” she said.

“In fact, I think there would never be a better time to do Hajj for me.”