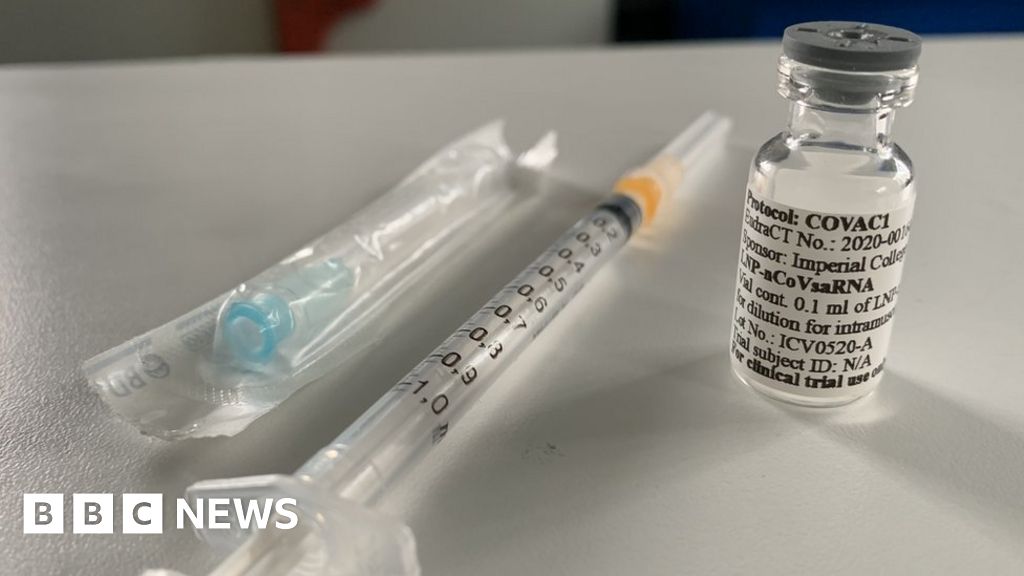 Volunteers began immunizing themselves with a new UK coronavirus vaccine.

Around 300 people will receive the vaccine in the coming weeks, as part of a trial led by Professor Robin Shattock and colleagues at Imperial College London.

Animal testing suggests that the vaccine is safe and triggers an effective immune response.

Experts from the University of Oxford have already started human trials.

Trials are among many around the world: there are about 120 ongoing vaccine programs.

“I offered to help beat the virus”

Kathy, 39, who works in finance, is one of the first volunteers to participate in the imperial trial.

She said she volunteered because she wanted to participate in the fight against the virus.

“I think it came from not really knowing what I could do to help, and it turned out to be something I could do.”

“And understand that things are not likely to go back to normal until there is a vaccine, so I want to be part of that progress as well.”

After this first phase, another test is being planned for October, involving 6,000 people.

The imperial team hopes that the vaccine can be distributed in the UK and abroad from early 2021.

Many traditional vaccines rely on a weakened or modified form of the virus, or parts of it, but the Imperial vaccine relies on a new approach, using synthetic strings of genetic code, called RNA, that mimic the virus.

Once injected into the muscle, the RNA self-amplifies, generating copies of itself, and instructs the body’s own cells to make copies of a spike protein found on the outside of the virus.

This should train the immune system to recognize and fight the coronavirus without having to develop Covid-19.

Because only a small amount of genetic code is used in the Imperial vaccine, a little is very helpful. The imperial team says that a liter of its synthetic material will be enough to produce two million doses.

Those doses have occurred in the United States. But later this year manufacturing is being moved to the UK, so if mass production is needed and when needed it can be done here.

All clinical trials start carefully and slowly to reduce safety risks. When the Oxford vaccine started in April, only two volunteers were immunized on the first day. In one week, 100 were beaten every day.

The unique nature of the Imperial vaccine means that only one volunteer will be vaccinated on the first day, followed by three more every 48 hours. After a week or so, the numbers will slowly increase.

Unlike the Oxford vaccine, which uses one dose, volunteers in the Imperial trial will receive two injections, four weeks apart.

Professor Shattock and his team say there are no particular security issues with their jab, it is simply the novelty of the approach that makes them proceed with caution.

There are more than 120 coronavirus vaccines in early development worldwide. Most of these will never go beyond the laboratory. Another 13 are now in clinical trials: five in China, three in the United States, two in the United Kingdom, one in Australia, Germany, and Russia.

All vaccine teams are eager to emphasize that they are not competing with each other, but against the virus. For there to be enough doses to protect the world, several vaccine approaches must be successful.

Professor Shattock said: “We were able to produce a vaccine from scratch and take it to human trials in just a few months.

“If our approach works and the vaccine provides effective protection against disease, it could revolutionize the way we respond to disease outbreaks in the future.”

Dr. Katrina Pollock, principal investigator of the study, added: “I would not be working on this trial if I did not feel cautiously optimistic that we will see a large immune response in our participants.

“The preclinical data looked very promising. We are getting a neutralizing antibody response, which is the immune response that you want to protect from infection. But there is still a long way to go to evaluate this vaccine.”

The research has been funded by £ 41 million from the UK government, as well as £ 5 million from other donations.