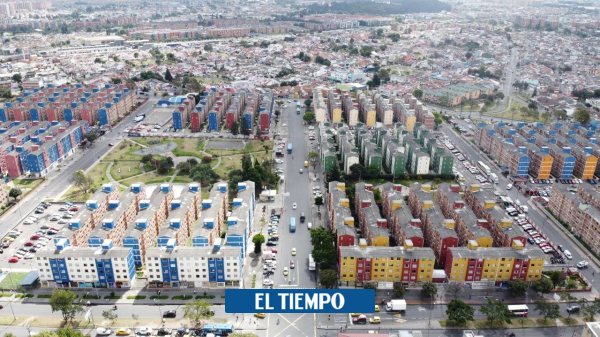 
If the Territorial Ordering Plan (POT) of the Claudia López administration is approved in the second half of 2021, Bogotá would have not only 20 locations but, at the same time, 30 districts.

(Further: Bogotá’s new POT points you to the city in 15 or 30 minutes)

Districts are the jewel in the POT crown

This is what the Planning Secretary, Adriana Córdoba, told EL TIEMPO, who explained that while the localities will continue to function as administrative units, the Districts will operate as planning units. And, in addition, he confirmed that these Districts will be the materialization of the popular concept of the ’15-minute city’ or ‘nearby cities’ that is already being implemented in cities such as Paris, by the hand of the Colombian architect and urban planner, Carlos Moreno, one of Mayor Anne Hidalgo’s key advisers. In fact, Bogotá wants to replicate this model and, in fact, it is also being advised by Carlos Moreno: he told this newspaper that he has already had meetings with the District to land the model in the capital.

(You may be interested in: What is missing from Bogotá to be a 15-minute city)

“The Districts are the jewel in the POT’s crown,” said Córdoba, in a meeting with this newspaper and defined a District as “a planning unit, a territorial unit for proximity. We want that in a District, a person at ‘x’ distance can carry out daily activities of care, leisure, culture, employment … Reaching everything in 20 minutes by public transport, by bicycle or on foot ”.

Thus, in the strict sense of the word, the Districts will be the tool for Bogotá to be a ‘city of 20 minutes’. Here are five things to know about this new model:

How are we in proximity today?

The Planning Secretariat assumes that proximity is determined by access to 4 variables: facilities (schools, hospitals, parks, etc.), economic fabric (workplaces and the original vocation of the territories), public services and mobility and transport.

What if all citizens enjoy this closely and with quality? It depends from where you look at it. Although there are points in Bogotá that already manage to concentrate services, equipment and mobility, such as Ciudad Salitre, there are others that are definitely far from achieving it. For example, a person who lives in Usme can hardly have his work close by because most of the economic axes are towards the center and north.

“As the economy has its own rules, of supply and demand, Today the city has a scattered economy where it has been efficient, almost ‘without politics’. TONow that we want a close economic fabric, we are going to have to make public policy intervention to generate incentives and allow where there are gaps or imbalances to come to compensate the economic sector ”, assures the Secretary. And that’s what POT is for.

To address this inequality of time and well-being, Planning has already measured the levels of proximity of the districts it proposes. Fourteen have levels of ‘positive proximity’; 6, of ‘intermediate proximity; and 10, of deficit proximity (see graph).

What will a District be like and what will delimit it?

The layout of a District will be marked by all that you can reach in 20 minutes by bicycle or public transport. Now, due to the geographical and physical conditions of Bogotá, there will be two ‘measures for the districts’ that will depend on whether you live on the plain (as in Bosa, Kennedy or Barrios Unidos) or if you live on the hillside (as is the case from Ciudad Bolívar, Usme or San Cristóbal).

Why? Because in 20 minutes, by bicycle for example, the same distance will not be covered on flat terrain as on ‘uphill’. So, to determine how big and how the districts will be located, the District has already done the math. In the case of plains, a District is what you can do within 5 kilometers.

Why? Because if you ride a bicycle or public transport at 15 kilometers per hour for 20 minutes on flat ground, you will cover 5 kilometers of travel. And, on the hillside, a District is what you can do 2.5 kilometers around. With that reasoning, and with the guidance of the future green corridors of Bogotá, the districts were drawn. In that first great ring of 5 or 2.5 kilometers around, a person living in that District should find a place of work and other equipment.

And it was also thought of adults, older adults and children who go on foot. Applying the formula ‘how much distance do I cover if I walk for 20 minutes at x speed’, ‘microproximities’ were created. For what? To make a ‘second ring’ in which you can walk to a care facility (gardens, schools, public services). Something very similar to what is already being tested today with the Bosa and Ciudad Bolívar Care Apples.

The measure of proximity in the Districts.

In summary, the Secretary of Planning indicates that in the districts or in those ’20-minute cities’ you will be able to “ensure proximity uses and services as educational, social welfare, health and cultural facilities; of commerce and services of zonal scale, basic jobs and public transport ”moving by public transport, bicycle or on foot.

It must be said that Planning is integrating, with the help of the Ministry of Mobility, the projects of the 26 green corridors (axes of urban transformation that will be carried out along avenues, streets or canals, as the case may be) and vital neighborhoods (a unit for local activation and improvement based on cultural, environmental and educational initiatives). In the case of vital neighborhoods, this month a pilot started in the San Felipe neighborhood, in Barrios Unidos.

Do you eliminate the use of the car?

It is not about banning the car, but the concept of the districts tries to put proximity to such a level that it is not necessary to go to the private car.

(Pasture: ‘This is not fanaticism for the bicycle or a war against the car’)

Will there be districts in rural areas?

No. The Districts obey an occupation model that seeks to work on the 37,417 urban hectares that Bogotá already has and on the 1,766 that it will have for expansion. There are other plans for rural areas.

When will there be districts?

“Once the POT review is approved by the District Council. In the regulation of land use and urban treatment that is made, after the approval of the Plan, differential factors will be taken into account according to the particular conditions of coverage and deficit of urban supports that each one of the districts present, especially in public space. and equipment ”, explained the Secretary.

(Keep reading: More flexible cities, the lesson that should be left to us from covid-19)

Will you eliminate localities?

No. In fact, there are districts that can cover territories of two neighboring localities. In any case, the POT is not the instrument to modify or eliminate localities. Planning holds that districts and localities can coexist.

What will be done with the districts?

Depending on their level of ‘proximity’ and the diagnosis that indicates where there are shortcomings, there will be interventions in the districts in the short, medium and long term. “The goals by district are based on achieving territorial balance by overcoming existing deficits. The goals are given to create urban conditions that improve the relationship between urban space and useful time, where travel times to carry out daily care, leisure, culture, employment, and living activities do not exceed 20 and 30 minutes ”, assures the Secretary.

Actions in the districts with poor proximity would be prioritized so that, in the next 15 years, there will be improvements. The District cautions that this is a long-term process that will require action from the public, private, and community sectors. The precise improvement actions will be defined in the POT. And they will not depend only on this mayor’s office, but on two more.

Who puts the money to develop them?

According to Planning, the POT must include fiscal and urban development instruments to make them possible. This will only be known in detail when the final POT project is made public.

For now, the Secretary anticipates that the money can come from “ordinary income of the District, coming from the established taxes (property tax, industry and commerce, urban delineation, among others). Likewise, there are instruments associated with land use planning, such as participation in capital gains, sales of additional building rights and the distribution of charges and benefits, etc. ”.

But, in any case, resources will not be extracted from the localities to achieve proximity: if there are investments on that side, they will be complementary. But the money comes from the central level.

See here what your district would be:

The number on the left corresponds to the District number (which you can locate on the map above); In the color box, you will be able to see the District’s proximity diagnosis; In the gray box you can see which UPZ are in that District.

– Cycle route and widening of the Rincón Avenue, in Suba, are delivered.

– ‘We do not have a risk concern at this time’: Claudia López.

In Antioquia they do not rule out a quarantine soon

Massacre in La Plata, Huila: three people from the same family were killed