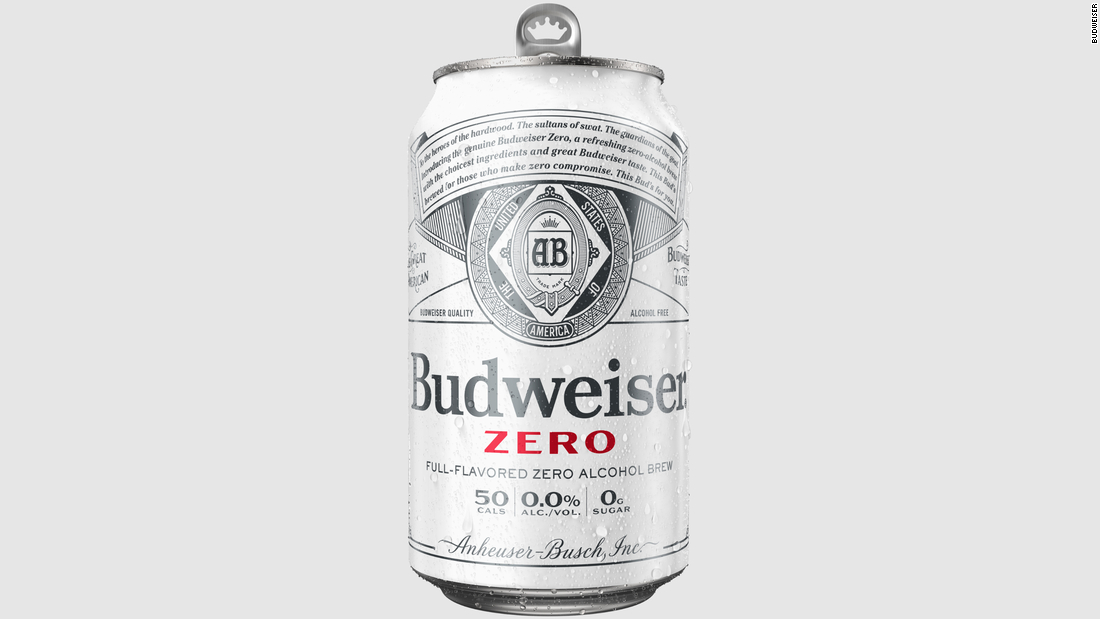 Anheuser-Busch InBev is using the renowned Budweiser brand to launch Budweiser Zero, a non-alcoholic beer that tastes similar to the best-selling alcoholic beverage. One serving has 0 grams of sugar, aimed at health conscious drinkers who crave the taste of beer and don’t want to deal with a hangover.

“We really want to disrupt this space because we believe there doesn’t need to be a stigma and an outdated understanding of non-alcoholic beer,” Monica Rustgi, vice president of marketing for Budweiser, told CNN Business. “Beer is something that people love, so it doesn’t have to be a binary decision to drink alcoholic beer or not drink beer at all.”

Bud Zero is receiving help from businessman and retired NBA player Dwyane Wade, who helped create the flavor and packaging of the product. He told CNN Business that he hopes the drink will not only attract athletes and people who are focused on their health, but also beer fans who are looking to be responsible in social settings.

“You don’t always want to walk away with a hangover or a buzz,” Wade said. “I loved the idea of ​​being part of the conversation without having to drink alcohol.” The basketball player added that he is often the designated driver for his family and friends.

The beer had a soft launch in March and debuts a national ad campaign with Wade beginning Wednesday. So far, the initial reaction from drinkers has “pleased” the company, according to Rustgi.

Bud Zero, which is priced similarly to Budweiser, will be sold first in a pack of 12 12-ounce cans and individual 16-ounce cans. A pack of 6 12-ounce bottles will be released in November.

Retail beer sales have increased 20% since mid-March, when Covid-19 began to spread in the United States, according to Nielsen. Non-alcoholic beer sales increased 35% in the same time period, the firm said.

Beer has fallen out of favor as drinkers are moving toward higher-priced spirits and healthier alternatives, such as the top seltzer. However, the affordability of beer, brand familiarity, and product innovations, including low-alcohol and non-alcoholic beer, have caught people’s attention once again.
The hope of leading a healthier life has led some drinkers to recalibrate their relationship with alcohol, leading to the rise of non-alcoholic cocktails and the “sober and curious” movement.
That trend has recently spread to the beer market as both large and small companies rediscover non-alcoholic beers. Athletic Brewing, for example, is a small craft brewery that only produces non-alcoholic beers and doubles production to keep up with demand.
Currently, the best-selling non-alcoholic beer in the United States is Heineken 0.0, according to Nielsen. The Dutch brewer launched the alcohol-free product in the United States last year after years of strong sales in Europe. Heineken called its launch in the United States a “success” earlier this year and said it is driving double-digit growth for its low-alcohol and non-alcoholic beer unit.
Following Heineken 0.0, O’Doul’s is the next best-selling brand on the list with Busch in third and Beck’s non-alcoholic beer in fourth. In particular, all three brands are the property of Anheuser-Busch (OUTBREAK) and it has a low amount of alcohol. But Bud Zero is the company’s first beer to be truly 0.0 alcohol by volume.
Using the Budweiser name could give the company an edge over competitors. AB InBev used the strategy or launch of Bud Light Seltzer, which quickly shot up one of the top-selling seltzer brands in the US in part due to its association with the name.

“The Bud name carries a lot of weight, and this product will benefit from instant consumer recognition,” Bryant said, adding that the Bud name “will certainly stimulate judgment among some consumers” who otherwise would not have tried it. .

Bud Zero is an integral part of Anheuser-Bush’s portfolio strategy, which is flooding consumers with different options, a technique that has continued to create multiple seltzer companies, including Bud Light Seltzer, Bon & Viv, and Natural Light Seltzer.

The parent company “has so many different brands and the fact that its selection of non-alcoholic beer options is growing is only playing into that trend,” Bryant said.