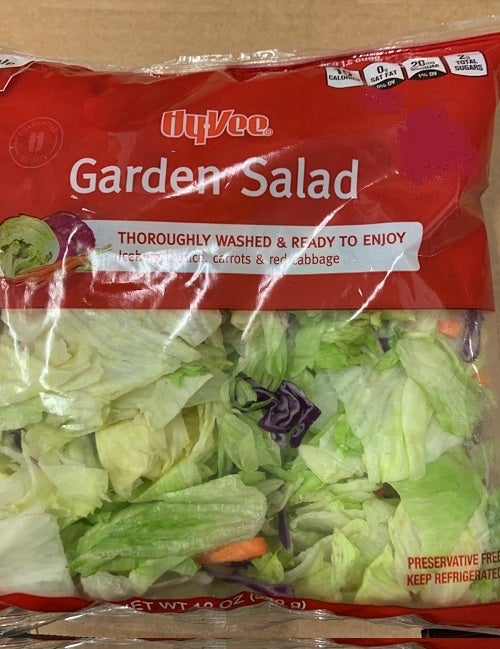 Beware, salad eaters – More than 100 people in various Midwestern states have become ill after consuming grocery store-bought bagged salad that contains cyclospore, a parasite that can cause diarrhea, stomach cramps, nausea, and fatigue.

The Food and Drug Administration (FDA), in conjunction with the Centers for Disease Control and Prevention (CDC), announced Tuesday that at least 122 people in seven states have become ill after consuming the salad mix that is Packaged as Hy-Vee Brand Garden Salads, Jewel-Osco Signature Farms Brand Garden Salads and ALDI Little Salad Bar Brand Garden Salads. As a result, at least 19 people have been hospitalized.

Since then, the salad mix, which contains carrots, red cabbage, and iceberg lettuce, has been recalled after it was distributed to stores in several states, including Arkansas, Illinois, Indiana, Iowa, Kansas, Michigan, Missouri, Minnesota , Nebraska, North Dakota, South Dakota and Wisconsin.

“Check out any of these recalled salads at home. Throw away any remaining salad, even if part of it has been eaten and no one has gotten sick, “the CDC advised. “If you live in Arkansas, Illinois, Iowa, Kansas, Missouri, Minnesota, Nebraska, North Dakota, South Dakota, and Wisconsin and don’t know if the garden salad mix you have at home is one of these recalled salads , don’t eat it. Throw it away. “

Cyclospora cayetanensis is a microscopic parasite that can cause cyclosporiasis of intestinal disease when people eat food or drink water contaminated with Cyclospora, according to the FDA, which it noted is generally more common in “certain tropical or subtropical regions of the world.”