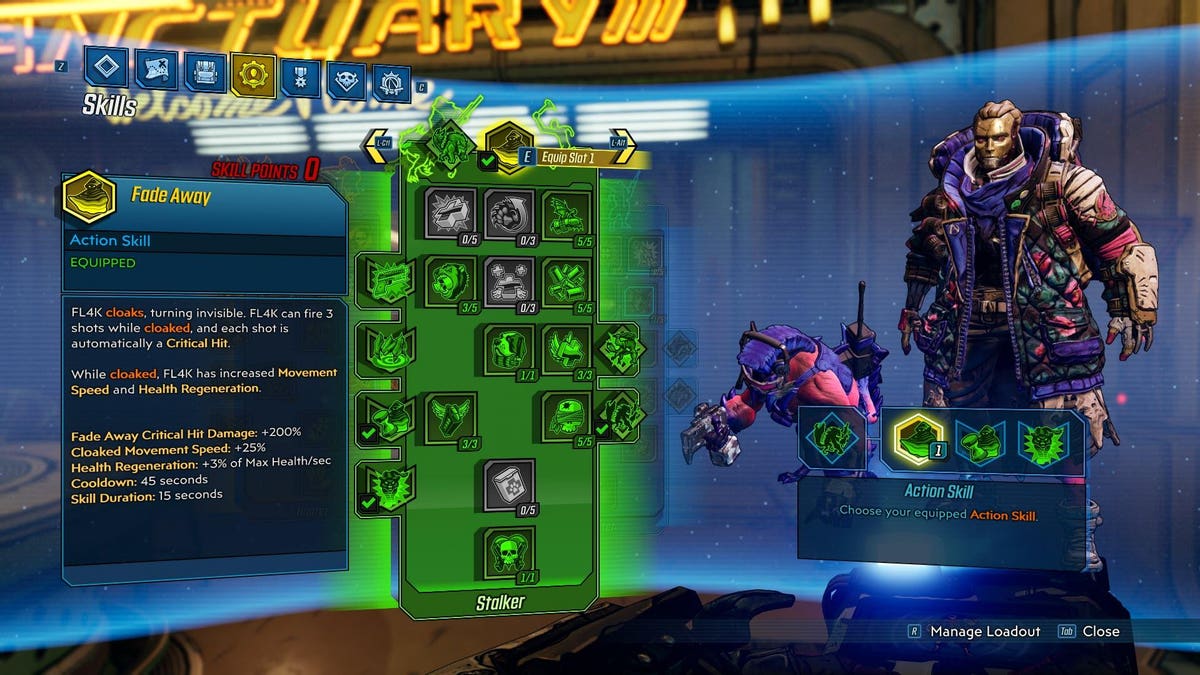 Well, the level cap has been raised again in Borderlands 3, and once again players find they have to re-cultivate the team, or try to get new drops that have come with the Bounty of Blood DLC.

That generally means cultivating a lot of bosses, the best source of falls in the game, and there’s a character and build that I would say is the best boss farmer in the game right now. That, of course, would be FL4K, which is back with its boss killing forms thanks to the changes in Mayhem 10 and one hell of a new sniper. This can kill Graveward in one clip and Traunt in about three shots, and I still haven’t seen anything that matches.

Here’s my FL4K sniper build that you can fire once you hit level 60.

This is Fade Away’s main tree, the action skill you’ll be using for this build, which should come as no surprise to anyone. Bypass all health and regeneration abilities, focus on damage and fire speed. I have the pet revived in case something goes wrong (sometimes I kill myself with sniper bounce damage). One key thing to note here is that you are not using Guerillas in the Mist as a magnification. Note that you are using a sniper, you are better off all three shots with a critical damage greater than the reduced damage you get from Guerillas. Unblinking is still a must.

No blue tree here at all. All critical things plus reduced action skills. I am debating whether or not Ambush Predator is better to put five points in place of Grim Harvest. Both look somewhat similar, and depending on the boss, you may not get the Ambush bonus, but you will always get Grim.

This would be Complex Root, a new DLC sniper that falls anywhere on the new map, and is by far the best weapon in the DLC, which I described in an article yesterday. Here are several good rolls for FL4K, the best one could be 50/150% radiation damage, which would require your health to be less than 50% with a front-end loader, but I don’t care about my 125% boss damage afterwards. of action skill one, since that’s fine. 100% elemental damage after the action ability is also good, or 200% damage while the action ability is active, which you can use with Fade Away. Here are many options and few bad choices.

Bounty Hunter gives you a ton of bonuses when fighting bosses, making it a must for this build, IMO. I need one with sniper damage, as level 60 versions now give 37% more weapon damage. Not that I really need it, but this is also giving me something like a 50% damage reduction against bosses as well. I need one with a better benefit distribution, but this is good for now.

Any shield you want with elemental skill damage after action. I always like Rechargers. If you have a complex root of 50/150 radiation, you will need a front loader.

I am literally only using this artifact for sniper damage and action skill cooldown. I suppose radiation could help because I have a complex root of radiation, but it is minimal. I’m not sure what other artifact with real abilities would benefit from this build, but it’s open to suggestions.

Activate Fade Away, shoot the boss. If the boss lives, keep shooting, activate all action skills buffs, the boss dies. I haven’t seen a boss with no immunity phases surviving more than one clip of this on TVHM Mayhem 10. Have fun.